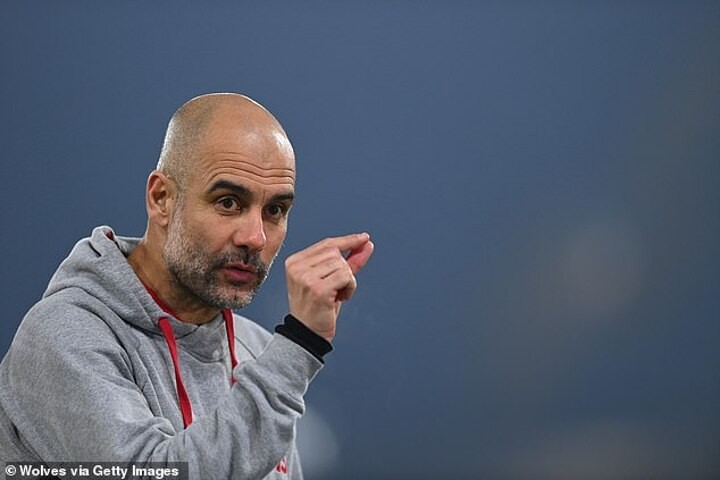 Pep Guardiola believes Tuesday's 'calm' victory over Wolves can act as Manchester City's blueprint to success in Europe and the domestic cup competitions.

City equalled a club record 28 matches unbeaten and further extended their lead atop the Premier League as they aim to wrestle back the crown.

Guardiola's side won a 21st straight match in all competitions with a glut of late goals, in turn going 15 points clear of rivals Manchester United, who face Crystal Palace on Wednesday.

The City manager suggested this sort of victory – reacting to a setback when Wolves equalised with their first shot – should serve as an example to attack the cups over the coming months.

'This is a good lesson for the knockout games,' Guardiola said. 'Good players up front can punish you. How we overcame the 10 minutes after their goal was brilliant. You have to handle these minutes.

'In knockout games you have to be stable, not to concede any more and get the game back in your hands.

'We were outstanding tonight. We were so serious. We have momentum now. We wouldn't have won at the start of the season.'

Guardiola reserved special praise for Riyad Mahrez, adding: 'In the last games he's been outstanding. He has a special quality, a guy who dances on the pitch. He doesn't lose the ball, he attracts opponents with his movements.'

City were afforded further good news by avoiding travel disruption in the Champions League with their last-16 home game against Borussia Monchengladbach remaining at the Etihad Stadium.