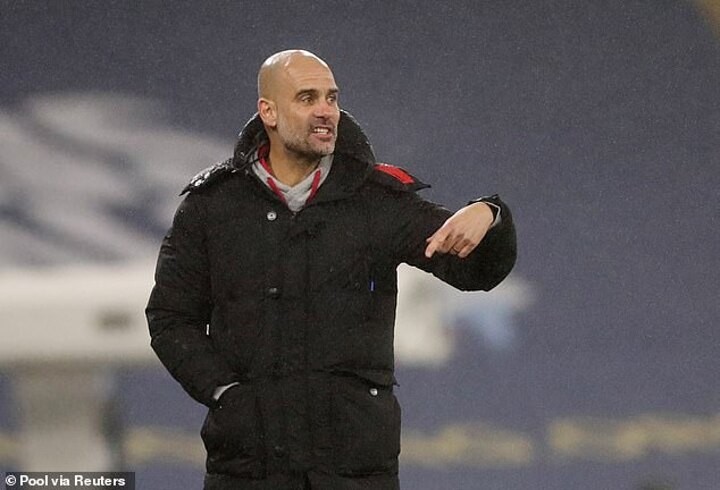 Manchester City boss Pep Guardiola is devoting his full attention to beating Crystal Palace this weekend after two seasons of struggles against Roy Hodgson's side.

City are in good form ahead of Palace's visit to the Etihad Stadium in the Premier League on Sunday having gone 14 games unbeaten in all competitions.

They have also won their last four in the league to move into strong title contention, but Guardiola is well aware of how Palace can throw a spanner in the works.

Palace claimed a stunning 3-2 victory over City at the Etihad in December 2018 as Andros Townsend scored a gobsmacking volley and the visitors repeated the trick with a dramatic 2-2 draw in their last game there 12 months ago as Fernandinho's own goal thwarted the hosts after Sergio Aguero had scored a late double.

Guardiola said: 'In my head - and hopefully in the head of the the players - it's just Crystal Palace.

'We were not able to beat them at home in the last two seasons. This is the only target that we have.

'A team like Crystal Palace knows exactly what they have to do. You have be patient and at the same time give a rhythm, but they are so clever.

'They defended well against Arsenal and they can produce a lot of quality up front. They were able to control a lot of the game.

'It was really tough the last two seasons here when we lost and drew, but we try to convince the players to do their job and win the game.'

Palace have shown renewed resilience since losing 7-0 to Liverpool and 3-0 to Aston Villa in consecutive games last month.

In their last three Premier League games, the Eagles have claimed creditable draws against Leicester and Arsenal and beaten Sheffield United.

Guardiola feels what they have experienced in recent weeks is typical of what all sides will have to go through in the Premier League this season due to the crammed scheduling.

He said: 'All the clubs have had their up and downs this season, more than ever. Every team has three or four good results and after that, one, two, three bad results.

'Crystal Palace is not an exception. What they have changed I don't know - but they know it.'

City are again without striker Aguero, who continues to isolate as a close contact of someone who has tested positive for coronavirus. Defenders Aymeric Laporte and Nathan Ake are out with muscular problems.