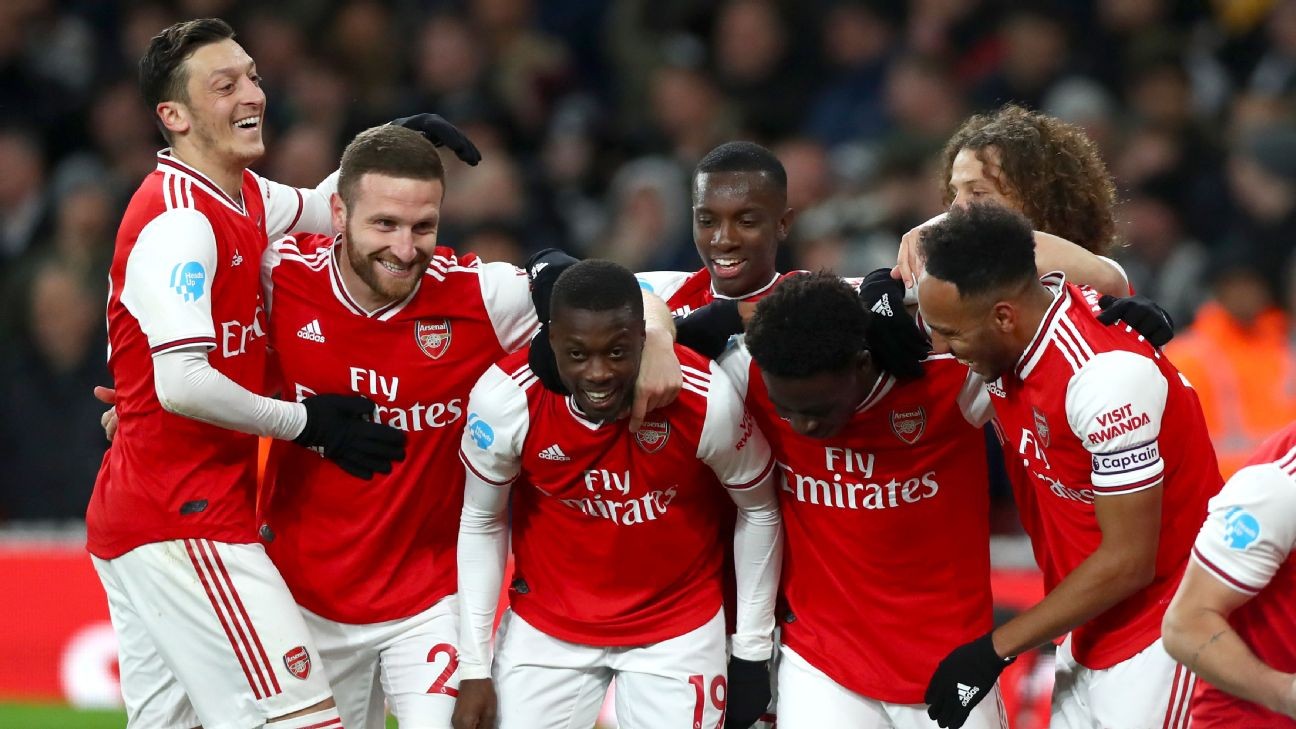 Mesut Ozil and Alexandre Lacazette discuss the mood in the Arsenal camp since Mikel Arteta took over as manager.

Arsenal had drawn their previous four Premier League games before facing Newcastle United. It looked as though that may be the case again here after an anticlimactic first half, but they came flying out of the blocks for the second and won 4-0.

Just nine minutes after the break, Pierre-Emerick Aubameyang headed in from Nicolas Pepe's lofted cross to open the scoring. Three minutes later and it was two for the Gunners, as Bukayo Saka embarrassed Valentino Lazaro, before squaring the ball to Pepe, who turned from provider to scorer.

The Gunners were given a slight scare when Allan Saint-Maximin hit the post, but they responded, as Mesut Ozil converted from Alexandre Lacazette's pass. Finally, Lacazette added a fourth, the Frenchman ending a nine-game barren run.

Having secured all three points, Arsenal now find themselves 10th in the table.

Arsenal were able to dominate the ball at times and it will be pleasing that after periods of intense pressure, they were able to get their foot back on it. In addition, while they looked stretched defensively at times, Arsenal were resolute enough to keep Steve Bruce's side out and maintain their clean sheet. The biggest positive will be the way that they came out and grabbed hold of the game after half-time, which saw them eventually win the game with relative comfort.

There was pretty much no attacking flair from the Gunners in the first half, which made life easy for a well-organised Newcastle side. Mikel Arteta will have also been concerned by the sloppiness of Arsenal's passing in that stage of the game. There is little to fault from their second-half performance, but Arsenal can't afford to waste halves of football.

7 -- He needs to get his side starting quicker, but whatever Arteta said at half-time certainly worked, as they were 2-0 up within 12 minutes of the break. It will also be encouraging for him that this was the case without any changes in personnel being needed for the initial upturn.

GK Bernd Leno, 7 -- Pulled off a good reaction save to prevent an unfortunate own goal for Dani Ceballos when the score was 0-0. Looked pretty comfortable throughout.

DF Hector Bellerin, 6 -- Had a few moments of sloppiness and really struggled to deal with Saint-Maximin, but did just enough to keep him out.

DF Shkodran Mustafi, 6 -- Almost put Arsenal ahead but slightly scuffed his volley. Wasn't precise enough with some of his passing, but got the job done defensively.

DF David Luiz, 6 -- Played some wayward passes, but worked fairly well in defence to stop Newcastle getting through. Made a very good intervention to deny Ciaran Clark.

DF Bukayo Saka, 7 -- He struggled defensively in the early stages, but was the Gunners' greatest attacking outlet at times. Made that pay dividends when he nutmegged Lazaro before clinically assisting Pepe.

MF Dani Ceballos, 8 -- Making his first start in any competition since November, but showed intent from the off. He lost his hold on the game and looked vulnerable when out of position during the first half, but dictated a lot of Arsenal's good play in the second. This transformation made him good value for the standing ovation he received when substituted off.

MF Granit Xhaka, 5 -- Picked up a stupid yellow card in the ninth minute for pulling on Lazaro's shirt, then looked on the edge of getting a second at times in the first half. Went on to have a steady second.

Nicolas Pepe had one of his brightest days as a Gunner with a goal and two assists vs. Arsenal.

MF Nicolas Pepe, 9 -- He looked largely ineffective in the first half, but made a massive improvement in the second, creating a chance for Eddie Nketiah, before assisting Aubameyang. He then added to that with a goal of his own, providing a clinical first-time finish. To top it off, he set up Lacazette for Arsenal's fourth of the game.

MF Mesut Ozil, 7 -- Looked very ponderous on the ball at times, though there were flashes of the creative spark we all know he is capable of producing. Capped off his performance with his first goal in 10 months, when he finished through the clambering hands of Martin Dubravka.

MF Pierre-Emerick Aubameyang, 7 -- Arsenal's captain looked as though he was on the game's periphery throughout the first half. However, it is he who opened the scoring for his team with a brilliantly executed header, which saw him come alive.

FW Eddie Nketiah, 4 -- Really felt for the Arsenal academy graduate in the first half, as he was desperate to get into the game but was often feeding off scraps. However, the chances did come in the second and he failed to take advantage of them, meaning he came off the pitch without a goal that really should have come. The main positive of his game was that he worked hard throughout.

FW Alexandre Lacazette, N/R -- Replaced Nketiah in the 85th minute and provided some good pieces of linkup play, before assisting Ozil and he then went on to end his drought, which should give him a massive confidence boost.

MF Joe Willock, N/R -- Replaced Ozil in the 91st minute and almost got an assist, but his ball into the box was blocked.