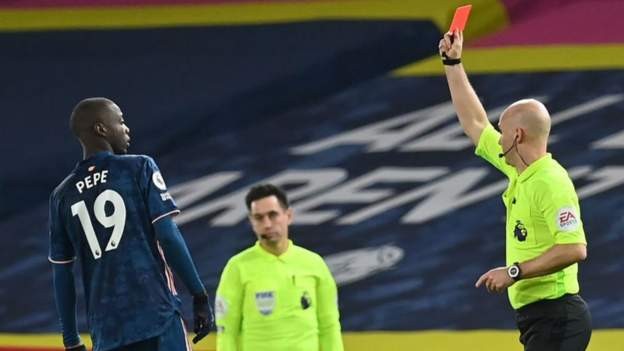 Arsenal boss Mikel Arteta says Nicolas Pepe "let the team down" with an "unacceptable" red card during their 0-0 draw at Leeds United.

Pepe was dismissed for a headbutt on Leeds' Ezgjan Alioski after video assistant referee consultation.

He will now miss Arsenal's next three Premier League games - against Wolves, Tottenham and Burnley.

"It is unacceptable. Unacceptable. At this level you cannot do it," he told BBC Radio 5 Live.

"It is a point. I am never happy with a draw but considering the circumstances it is one we take and move on."

Pepe's sending off came six minutes into the second half, with Leeds hitting the woodwork three times following the Ivory Coast forward's dismissal.

Asked whether Pepe should apologise, Arteta said: "That depends on the player. It is unacceptable. I will deal with the player.

"On those moments, you can use the excuse that someone has thrown the game away, or you can react and show resilience, ambition and character and belief that you can still win the football match, and that's what the team did tonight.

"They suffer together, and they hope and they have belief that in any moment we could find a way to score a goal, which we were unlucky not to do."

Speaking on Sky Sports, he added: "With 10 men it is a big disadvantage. I really liked the personality of the team when Pepe let the team down, how we stuck to what we had to do and had a moment or two to win the game, but obviously it makes it really difficult."

Arsenal defender Hector Bellerin explained what Pepe said to his team-mates after the game would stay between them.

"After the game, everyone has a lot of adrenaline and these things need to wait until later in the week," he added.

The draw moves Arsenal up to 11th in the table, having scored one Premier League goal in five games since 4 October.