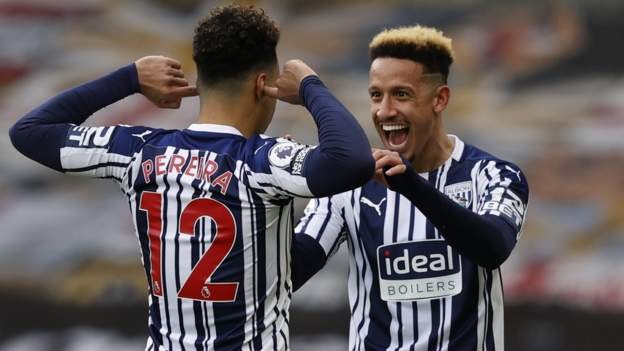 West Brom came from behind to claim victory in the Black Country derby as two penalties from Matheus Pereira helped them beat Wolves at Molineux.

It was only the Baggies' second win of the season - and their first under new boss Sam Allardyce - and the first time they had scored three times away from home in the Premier League in almost seven years.

While they remain in the relegation zone, it will provide fresh optimism about avoiding the drop.

Both spot-kicks came from clumsy tackles from behind on Callum Robinson, by Willy Boly and Conor Coady.

The penalties were similar too as Pereira sent Rui Patricio the wrong way. The first broke the deadlock after eight minutes, the second won the game 11 minutes into the second half.

In between, Fabio Silva and Boly turned the game on its head in the space of five minutes at the end of the first half, only for Semi Ajayi to level with a header straight after the restart.

The result extended a miserable run for Wolves, who since striker Raul Jimenez fractured his skull at Arsenal on 29 November have taken five points from nine games and slid down the table into 14th spot, with all the clubs below them having games in hand.

After a nine-year break since the last one, this result extended an excellent West Brom record in derbies, which now contains just three defeats in 22 games.

They achieved victory without goalkeeper Sam Johnstone, who was absent following a positive coronavirus test, and with a vocal intervention from Allardyce.

Having spent most of the game in his dug-out, legs stretched out and arms folded, the former England boss finally came out to voice an opinion as his side, trailing and looking edgy, failed to execute what their manager felt was a routine clearance.

Alllardyce's bellowing could be heard from the media seats. The instruction was clear - get the ball away from our goal quickly.

The advice was heeded and while he might not like the description, within minutes, his side had scored what might be regarded as a typical Allardyce goal as Kyle Bartley flicked on a long throw to the near post and Ajayi nodded it over Rui Patricio.

Pereira was nerveless with his penalties and while West Brom can hardly be relied on to either score regularly or keep clean sheets at present, Allardyce has apparently instilled some drive into his players.

With significant additions before the transfer window closes on 1 February, it cannot be discounted that Allardyce will maintain his proud record of never getting relegated.

If there was one moment that underlined Nuno Espirito Santo's increasingly desperate search for an answer to his side's problems, it came 19 minutes into the second half.

Skipper Conor Coady had never been substituted before under the Portuguese.

But after the England man conceded his side's second penalty for another clumsy challenge on Robinson, Nuno evidently decided he was expendable as he switched his team around to accommodate the introduction of Rayan Ait-Nouri at full-back.

In a season where Nuno was committed to change anyway, the loss of Jimenez is threatening to undermine confidence in all the good work Wolves have done in progressing from a mid-table Championship outfit into a side capable of securing successive seventh-place finishes in the Premier League.

If, for instance, Wolves finished 15th this season, it would be an outcome they have only bettered three times since they were relegated in 1976. Evidently though, spending and improvement under Nuno has raised expectations.

They certainly made enough chances to beat West Brom - and had a staggering 23 shots - but without Jimenez, there was no consistent threat.

Fabio Silva took his goal well, opening his body up and sending a precise finish into the far corner from Boly's back-heeled pass. But when crosses come into the box, he does not routinely attack them as Jimenez would.

When Boly put Wolves ahead with an instinctive effort just before the break, it did appear the hosts would claim victory.

Instead, West Brom rallied and though the hosts had responded once to falling behind for the ninth successive league game, a second comeback proved beyond them.

West Brom manager Sam Allardyce has faced Wolves more often without losing than any other side in the Premier League (P6 W4 D2), winning his past two meetings. West Brom have won consecutive away league matches against Wolves for the first time since a run of three between 1929 and 1931. Wolves are without a clean sheet in 12 Premier League games, the longest ongoing run among sides currently in the division.Wolves have conceded the first goal in each of their past nine Premier League games - their longest ever run of conceding the opening goal in games in the competition.Willy Boly became the first Wolves player to concede a penalty, assist a goal and score a goal in the same Premier League game since Adlene Guedioura in May 2011 - which was also against West Brom at Molineux.Matheus Pereira became the first player to score two penalties in a Premier League match for a newly promoted club since Chris Brunt also did so for West Brom against Liverpool in April 2011. Semi Ajayi's goal for West Brom was their first via a throw-in in the Premier League since Graham Dorrans vs QPR in April 2012. Indeed, since the start of 2018-19, no defender has scored more headed league goals in England's top four tiers than Ajayi (nine - level with Virgil van Dijk and Aaron Pierre). Wolves have lost both of their Premier League games in which Fabio Silva has scored (also 1-2 v Burnley in December), making him the youngest player ever to lose both of the first two Premier League games in which he scored (18 years 181 days).

Wolves travel to non-league Chorley in the FA Cup fourth round on Friday (19:45 GMT), before returning to Premier League action against Chelsea at Stamford Bridge on Wednesday, 27 January (18:00 GMT).

Next up for West Brom is a Premier League match against West Ham at London Stadium on Tuesday (18:00 GMT).

Fábio Silva (Wolverhampton Wanderers) has gone down, but the referee deems it simulation.

Attempt missed. Rayan Aït-Nouri (Wolverhampton Wanderers) right footed shot from outside the box is too high. Assisted by Leander Dendoncker.

Patrick Cutrone (Wolverhampton Wanderers) wins a free kick in the attacking half.

Adama Traoré (Wolverhampton Wanderers) wins a free kick in the attacking half.

Attempt missed. Patrick Cutrone (Wolverhampton Wanderers) right footed shot from the centre of the box is too high.

Rayan Aït-Nouri (Wolverhampton Wanderers) wins a free kick in the defensive half.

Leander Dendoncker (Wolverhampton Wanderers) wins a free kick in the defensive half.