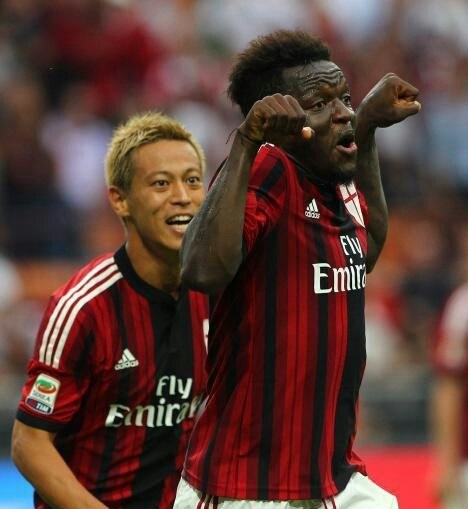 There was a goal for Sadat Bukari in Romania and Jordan Ayew also scored his first Ligue 1 goal in the Lorient colours.

GHANAsoccernet.com's Akyereko Frimpong Manson has a comprehensive wrap on how Ghana players fared abroad over the weekend. 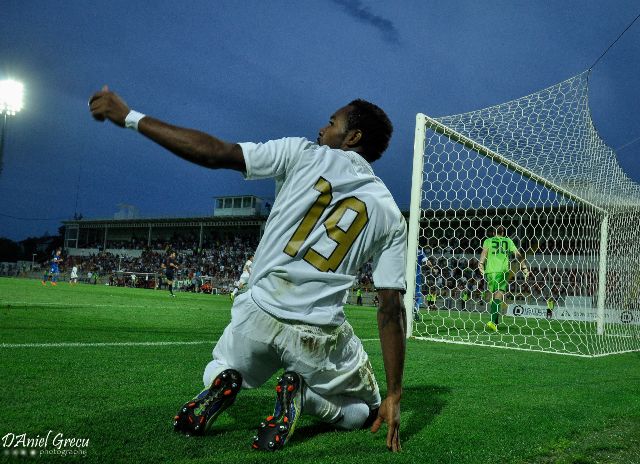 Sadat Bukari netted for Astra
Former Ghana U17 striker Sadat Bukari scored the second goal for Astra who enhanced their reputation with a 5-0 win overÂ CS U. Craiova. Midfielder Seidu Yahaya was not in the Astra team for the game.

Sulley Muniru played 75 minutes for CFR Cluj who beatÂ Petrolul 2-1 at their own backyard.

FC Copenhagen returned to winning ways after posted a narrow 1-0 win over Odense BK. Ghanaian midfielder Daniel Amartey and Danny Amankwaa played the entire 90 minutes of the game for Copenhagen.

Defender Rashid Sumaila did not play for Mamelodi Sundowns who beat Amazulu 2-0. But midfielder John Arwuah played for Amazulu.

Maritzburg United held Free States Stars to a 1-1 draw at their backyard. Former Black Stars defender John Pantsil and young striker Anas Mohammed both played full throttle for Maritzburg. But defender Awal Mohammed was not in Maritzburg squad for the game.

Black Stars winger Andre Ayew lasted 87 minutes and set up a goal in the Flovan Thauvin as Olympique Marseille posted a 4-0 win over OG Nice on Friday night.

Former Ghana U17 striker Kwame Nsor was not in the Metz team when they beat Olympique Lyon 2-1 on Sunday night.

Dennis Appiah was in action for Caen who suffered a 1-0 loss against Stade Rennes at their favouriteÂ MMArena in LeMans on Saturday.

In the Ligue de National, former Ghana U17 striker Charles Boateng played 83 minutes for Avranches who lost 2-1 at home to ten-man FC Paris on Friday.

21-year-old midfielder Ben Amofa played the entire 90 minutes for Strasbourg who split the points withÂ Boulogne in a 0-0 draw.Â

Ghana defender Baba Rahman displayed a sterling performance for Augsburg by setting up two late goals in their 3-2 loss against Borussia Dortmund on Friday night.

German-born Karim Bellarabi scored his third goal in four games for Bayer Leverkusen when they crawled from behind to beat Hertha Berlin 4-2 on Saturday.

Kevin-Prince Boateng was axed from the Schalke 04 team when they drew 1-1 with Bayern Munich at the Veltins Arena.

Ghanaian-born Canadian defender Randy Edwini-Bonsu was booked in the 32nd minute and played full time for Stuttgarter Kickers who lost 4-2 at Arminia Bielefeld.

In the Bundesliga 2, defender Philemon Ofosu-Aryeh was in full time action for Aalen when they drew 2-2 withÂ Kaiserslautern.

In other games in the Liga 3, Evans Nyarko and Joseph-Claude Gyau both started and finished the game for Borussia Dortmund II when they drew 0-0 atÂ Hallescher FC.

Kwame Kusi was brought on in the last 15 minutes of the game byÂ Fortuna KÃ¶ln who lost 1-0 against MSV Duisburg.

Reagy Ofosu was an unused substitute by leaders Chemnitzer FC who posted a 2-0 win over Unterhaching.

Abdul Aziz Tetteh was sent off in the 80 minute during Platanias' 4-0 home loss against PAOK on Sunday night in the Greek Super League.

Winger Edwin Gyasi was left out of the Heracles Almelo side that lost 3-1 at Excelsior.

Raymond Gyasi could not weave his way in to the AZ Alkmaar first team squad when they won 3-1 at Dordrecht.

NAC Breda coasted to a 3-1 win over PEC Zwolle. Ghanaian attacker Kingsley Boateng was in full time action for Breda while Dutch-born Jeffrey Sarpong came off the bench to assist the third goal for Breda.

FC Groningen recorded a smooth 2-0 win over Ajax Amsterdam. Young defender Kenny Tete was left out of the Ajax squad for the trip but Dutch-born defender Johan KappelhofÂ played at center-back for Groningen.

FC Twente and Feyenoord played out a 0-0 stalemate. Attacker Elvis Manu was came off the bench in the 74th minute to play for Feyenoord while Shadrach Eghan was also introduced with 13 minutes left to go.

In other games in the second-tier league, Defender Marcel Appiah was in full time action for NEC Nimejen who returned to their winning ways after beating Helmond Sport4-1.

Leroy Owusu and Elton Acolatse both started the game for Jong Ajax who suffered a 2-0 slip atÂ Den Bosch on Friday night.

Former Ghana U20 invitee Thomas Partey completed the entire 90 minutes of the game for Almeria who slipped to a 1-0 loss at Getafe.

Midfielder Paul Quaye could not make the Malaga first team grades in their 3-0 mauling by Valencia.

Derek Boateng was unused by newly-promoted Eibar who lost 2-1 at Atletico Madrid.

Granada and Elche played out a 0-0 drawn game on Sunday night. Neither Fatau Mohammed nor Michael Anaba played in the game.

In the Segunda Division, Ghana goalkeeper Razak Brimah manned the post for Mirandes who posted a 2-1 win over Racing Santander.

In the Segunda B, Ghana midfielder Clifford Aboagye and Richard Boateng both played for Granada II who drew 1-1 withÂ Cartagena.

Frank Acheampong was in full time action for Anderlecht who held a Club Brugge to a 2-2 draw.

Standard Liege's unimpressive start to the season continued as they played a 1-1 drawn game with Lokeren. Belgian-born defender Denis Odoi played the entire 90 minutes of the game for Lokeren but former Liberty Professionals youngster Eugene Ansah was not in the Lokeren squad for the game.

Sporting Charleroi posted a 2-0 win over KV Mechelen. There was no Jerry Vandam or Abdul Yakinu-Iddi in the Mechelen team.

Bennard Kumordzi was booked in the 40th minute and played full throttle under former Aston Villa manager Alex McLeish as his Racing Genk side drew 1-1 with KV Oostende.

Dutch-born defender Mitch Apau was in impressive form for Westerlo who shared the spoils in a 2-2 draw withÂ Zulte-Waregem on Saturday.

In the Second Division, Stephen Asamoah played the entire regulation minutes for AS Eupen when they succumbed to a 2-0 loss at OH Leuven.

Slovan Liberec totally outclassed Banik Ostrava by hammering them 6-0. Former Liberty Professionals midfielder Isaac Sackey missed the game with suspension but Dutch-born Kevin Luckassen sat on the bench. In the Ostrava team was former Ghana U20 pair of Francis Narh and Derick Mensah who both started the game.

Chelsea dismantled Everton 6-3 at the Goodison Park in the Premier League on Saturday. Ghana winger Christian Atsu was left in the stands due to a contract clause fixed in his loan move from Chelsea.

Crystal Palace produced a wonderful last-gasp display to share the spoils in a 3-3 draw at Newcastle United. Young striker Hiram Boateng could not make the Palace squad for the game.

Jeffrey Schlupp's tailor-made cross help Leicester City to hold Arsenal to a 1-1 draw in the Premier League on Sunday evening.

In the Championship, Middlesbrough recorded their second straight defeat after succumbing to a 1-0 home defeat to Reading. Ghana winger Albert Adomah was booked in the 76th minute and played full throttle at the Riverside.

Alexander Tettey was in action for Norwich City who drew 1-1 withÂ AFC Bournemouth.

In the League One, former Chelsea youth team captain Nana Ofori-Twumasi returned from injury to sit on the bench to Yeovil Town who drew 1-1 with Barnsley. Youngster Nana Boakye-Yiadom could not make the Barnsley squad for the game.

Birmingham City's Koby Arthur came off the bench to score the match-winner for Cheltenham Town in their narrow 1-0 win over Hartlpool United.

Kwadwo Asamoah beats off competition from Patrice Evra to start the match to start Juventus and complete the game for Juventus in their 1-0 win at Chievo Verona on Saturday. Midfielder Isaac Cofie came off the bench to play the last 70 minutes of the game for Chievo.

Sulley Muntari opened his Serie A season with a goal for AC Milan in their 3-1 victory over Lazio. The 30-year-old completed the game for the Rossoneris while countryman Michael Essien came off the bench in the 75th minute to play for Milan.

Richmond Boakye-Yiadom was introduced in the 74th minute by Atalanta who drew 0-0 with Hellas Verona.

Cesena marked their return to the Serie A with a narrow 1-0 win over Parma. Ghana midfielder Afriyie Acquah played the entire 90 minutes for Parma but youngster Stephen Nyantakyi sat on the Parma bench.

Palermo and Sampdoria grind out a 1-1 draw on Sunday night. Former Ghana U20 midfielder Alfred Duncan sat on the Sampdoria bench while Swedish-born Robin Quaison was unused by Palermo.

Sassuolo and Cagliari played out a 1-1 draw. Midfielder Raman Chibsah came off the bench to play for Sassuolo but Godfred Donsah was unused by Sassuolo.

Emmanuel Agyemang-Badu was booked in the 65th minute and was replaced three minutes by Udinese who humbled Empoli 2-0 at the Stadio Communale Fruili.

In the Seria B, former Inter Milan Primavera striker Isaac Ntow started and lasted 57 minutes for Brescia who lost 1-0 atÂ Frosinone on Saturday. 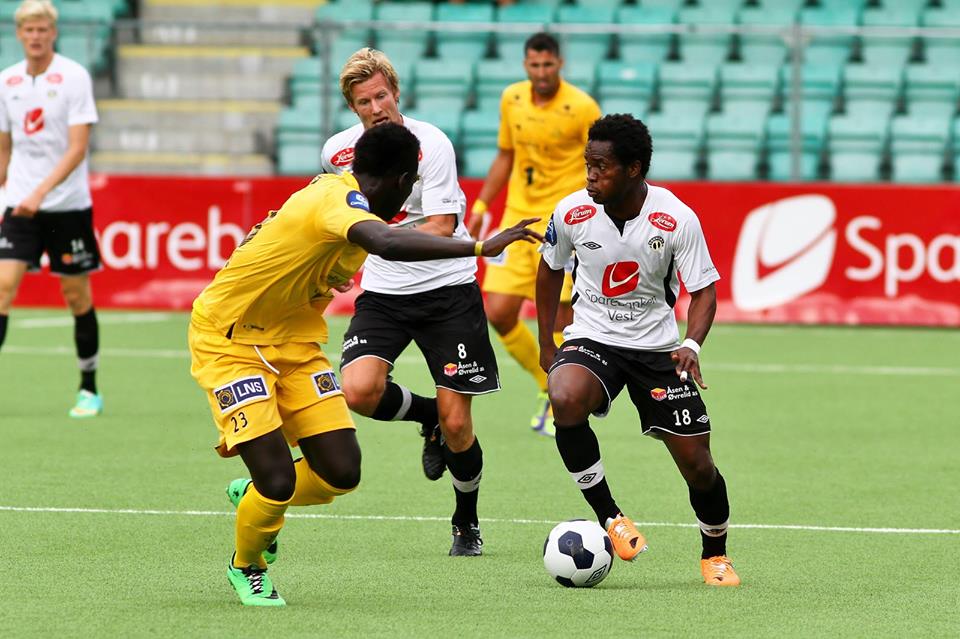 Osei Barnes was not in the PacoÂ Ferreira team that beat Penafiel 1-0 on Sunday in the Liga Sagres.

Spartak Moscow suffered a 2-0 away loss atÂ Amkar Perm'. Ghana striker Abdul Majeed Waris was introduced in the 64th minute but could not make any impact for Spartak.

Halmstad BK swapped places with Helsingborg IF after stunning them 4-1 at their own backyard. Swedish-born Ghanaian defender Joseph Baffo and King Osei Gyan played the entire game for Halmstad BK. In the Helsingborg team, David Accam and Ema Boateng both started the game for Helsingborg and Boateng was replaced in the course of the game.

At theÂ Nya Gamla Ullevi, BK Hacken and Mjallby split points in a 1-1 drawn game. Nasiru Mohammed started the game for Hacken and was replaced in the 82nd minute while former Heart of Lions midfielder Kwame Bonsu also lasted 88 minutes. Augustine Okrah could not make the Hacken squad for the game.

AIK Solna cruised to a 4-2 win overÂ Norrkoping. Former Ghana U20 defender Ebenezer Ofori played the entire game for AIK but Kwame Karikari and Ibrahim Moro were not in the AIK squad for the game.

Enoch Adu Kofi played full throttle for Malmo FF but they suffered a 2-0 loss at Djurgarden.

Godsway Donyoh was a second-half substitute byÂ Falkenbergs who lost 1-0 at Elfsborg.

FC Sion were 2-1 losers at FC Thun on Saturday afternoon. Ghana winger Ishmael Yartey came off the bench to play for Sion in the 77th minute but compatriot Ebenezer Assifuah could not make the trip due to injury.

Eski?ehirspor kicked started their season with a 2-1 win over Konyaspor with Ghana defender Jerry Akaminko who is recuperating from injury.

Elsewhere at theÂ BC Place Stadium, Vancouver Whitecaps were beaten 3-0 by Portland Timbers. Neither Gershon Kwoffie nor Khalif Alhassan played the game for Vancouver and Timbers.

Midfielder Wakaso Mubarak was unused by Celtic who drew 1-1 with Dundee United on Sunday in the Scottish Premier League.

Prince Buaben was red carded in the 72nd minute while in action for Hearts of Midlothian who beat Falkirk 4-1.