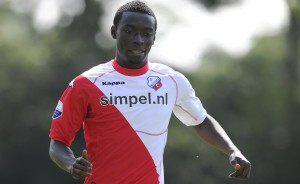 Ghana defender Nana Kwesi Asare is among the Ghanaian players who excelled in Europe this weekend as his two goals helped Utrecht to beat Ajax 2-1.

Winger Nana Kwasi Asare scored a brace for FC Utrecht who smashed Ajax Amsterdam 6-4. The former KV Mechelen man fired home a cracker from the edge of the box in the 16th minute before profiting from a goalkeeping error ten minutes after the break. Vitesse Arnhem siege up the ladder suffered a jolt as they slipped to a 1-0 loss at NAC Breda.Ghana's pocket-size midfielder Anthony Annan lasted the entire match for Vitesse Arnhem. Young midfielder Stanley Aborah Junior was introduced by Vitesse on the 85th minute. Kwame Quansah was in full time action for Heracles Almelo who suffered a 4-1 loss at giants PSV Eindhoven. Young defender Mitch Apau scored a 45th minute consolation goal for Veendam who lost 3-2 at Helmond Sport. He played full time for Veendam as well as compatriot Jonathan Opoku. Former Ghana U17 striker Kelvin Bossman sat on the bench for Helmond Sport who have moved up to 4th place. Striker Gideon Amponsah Boateng was not in the MVV 18-man squad that suffered a 5-1 loss at Cambuur.

Abdul Yakeen Iddi saw full time action for KV Mechelen who were condemned to a 6-2 defeat atGenton Friday. Young striker Marvin Ofori-Appiah was an unused substitute for Racing Genk who shared the spoils withÂ Kortrijkin a 2-2 draw. Neither Cofie Bekoe nor Rahim Ayew was in action for Lierse BK when they humbled new boysLeuven3-1. But striker Patrick Amoah was introduced after 76 minutes. Striker William Owusu-Acheampong sustained an injury and was replaced after just 38 minutes when his relegation-threatened Westerlo lost 4-2 at home to Lokeren. Denis Odoi was a 90th minute substitute for leadersAnderlechtwho lost 1-0 at Cercle Brugge. Standard Liege moved to occupy 6th spot after beating Club Brugge 2-1. Ghana's Daniel Opare sat on the Liege bench.

Newcomers Evian Thonon Gaillard surprisingly held champions Lille to a 1-1 draw at the Stadium Nord Lille. Ghana midfield starlet Rabiu Mohammed was brought on the 90th minute. Black Stars defender Jonathan Mensah is out with injury.Â  Defender John Boye who is out with a thigh injury watched from the Route de la Lorient stands when his Stade Rennes were held to a 1-1draw by Valenciennes.Â  Jordan Ayew came off the bench to score the opener for Olympique Marseille who defeated OG Nice 2-0. Jordan replaced Andre-Pierre Gignac on the 61st minute and opened the scoring on 72 minutes. Andre Ayew played 90 minutes for Marseille.Â  Defender Jerry Vandam was a pillar in defence for Caen who recovered from last weekend's loss to thrash Dijon 3-0.Â  Monaco remained at the foot of the table after failing to beat Le Mans at their own backyard. Defender Dennis Appiah was replaced just before the restart but Moussa Narry played full time for Le Mans who also face the prospect of dropping into the relegation zone.Â  Haminu Dramani did not play because Arles Avignon's game with Guingamp was called off.

Udinese reclaimed top spot after beating Siena 2-1 at the Stadio Friuli. Kwadwo Asamoah lasted the entire match for the 'Little Zebras but Emmanuel Agyemang-Badu was brought on after 75 minutes.Â  Ghanajunior international Afriyie Acquah was key toPalermo's 3-1 victory overBologna. He played the full 90 minutes.Â  Ahmed Barusso failed to break into the AS Roma first team when they beat new boys Novara2-0.Â  AC Milan dispatched Catania 4-0 to give their title ambitions a shot in the arm. Kevin-Prince Boateng who has retired from international football was suspended and watched the game from the stands.Â  In the Serie B, Sassuolo lost their leadership of the toTorino who held them to a 0-0 at their favouriteÂ Stadio Alberto Braglia. Striker Richmond Boakye-Yiadom played 59 minutes for Sassuolo but his compatriot Isaac Cofie did not feature in the Sassuolo 18-man squad for the trip.Â  YawAsante missed out of the Grosseto first team squad when they won 2-1 atÂ Nocerina.Â  In the Primavera league, Inter Milan eased pastGrosseto2-0 at the Appiano Gentile. Defensive midfielder Joseph Alfred Duncan was suspended for the game.Â  Daniel Kofi Agyei captained Fiorentina to pipSiena1-0. Nii Nortey Ashong and Amidu Salifu both played 90 minutes but speedster Maxwell Acosty Boadu remain suspended.Â  Parmadrew two-all with Sassuolo. Defender Bright Addae played 90 minutes for Parma but Godfred AdolfÂ  sat on the bench.Â  Essmond Hansen Sackey scored all two goals for Corregese who drew 2-2 atÂ Zola Predosa.

Quincy Owusu-Abeyie hit top form for Panathinaikos who consolidated their leadership of the Super League with a 3-2 victory at AEK Athens.Â  FormerÂ NorthamptonTownmidfielder Abdul Osman played the full 90 minutes for relegation threatenedÂ Kerkyra who lost 1-0 at Xanthi.Â  Full-back David Addy was booked on the 40th minute and played full time forÂ Panaitolikos who squeezed a point out of Ergotelis.Â  Bernard Yao Kumordzi played in central midfield for Panionios who recorded a 3-1 loss at home to OFI Crete.

Schalke 04 drew 2-2 with Hannover 96 to stay to 5th place. Veteran defender Hans Adu-Sarpei did not make the trip with Schalke 04.Â  Black Stars defender Isaac Vorsah played at the heart of defence for TSG Hoffenheim who were held to a 1-1 draw at theirÂ Wirsol Rhein-Neckar-Arena byÂ Kaiserslautern.Â  In the Bundesliga II, Charles Takyi watched the action from the bench as his St. Pauli were held to a 2-2 draw byÂ Greuther FÃ¼rth.Â  Mohammed Lartey played 82 minutes for Hansa Rostock in their 0-0 draw atÂ FSV Frankfurt.

Emmanuel Frimpong remained out of the Arsenal 18-man squad over the weekend when they defeated West Bromwich Albion 2-0 to move up to 7th place.Â  In the Npower Championship, defender John Pantsil lost his place in the Leicester City 18-man squad when they lost 1-0 at home to Leeds United. Winger Lloyd Sam sat on the Leeds United bench.Â  Akwasi Asante played with the Birmingham City second string side over the weekend as the senior team recorded a 1-0 defeat at Reading.Â  Prince Abankwah Buaben played 83 minutes for Watford who lost 1-0 at Middlesborough.

Newly promoted Rayo Vallecano condemned Real Sociedad to a 4-0 to move up to 8th place while Sociedad dropped to second from bottom. Jeffery Sarpong was not in the Real Sociedad first team squad for the match.

There was no Richard Boateng in the Granada FC team that drew 0-0 with Racing Santander at their own backyard.

Young midfielder Felix Agyei failed to hold down a place in the Red Bull Salzburg 18-man squad that lost 3-0 at Mattersburg.

FC Zarya slipped closer to the drop zone after losing 1-0 to Tavriya at their own backyard. Former Ghana U20 center-back Daniel Addo was replaced just after 35r minutes because of injury.

FC Dnipro managed a slim 1-0 win over Arsenal Kiev to move to 4th place on the Ukrainian Premier League table. Midfielder Derek Boateng was a full timer for Dnipro b

Yaw Antwi and Abraham Frimpong did not travel with Vojvodina who drew 0-0 with Javor Ivanjica.

Winger Quincy Osei was a second half substitute for Hajduk Kula who held Spartak Subotica to a 1-1 draw.

Striker Mathew Amoah warmed the bench whenÂ Mersinsnatched a vital in their 0-0 draw with giantsÂ Galatasaray.

Prince Tagoe watched the action from the bench when Bursaspor played a 1-1 draw withÂ ?stanbul BB.

In the second-tier league, Alhassan Wakaso warmed the bench for bottom-placedÂ Portimonense who lost 1-0 at home leaders Atletico CP.