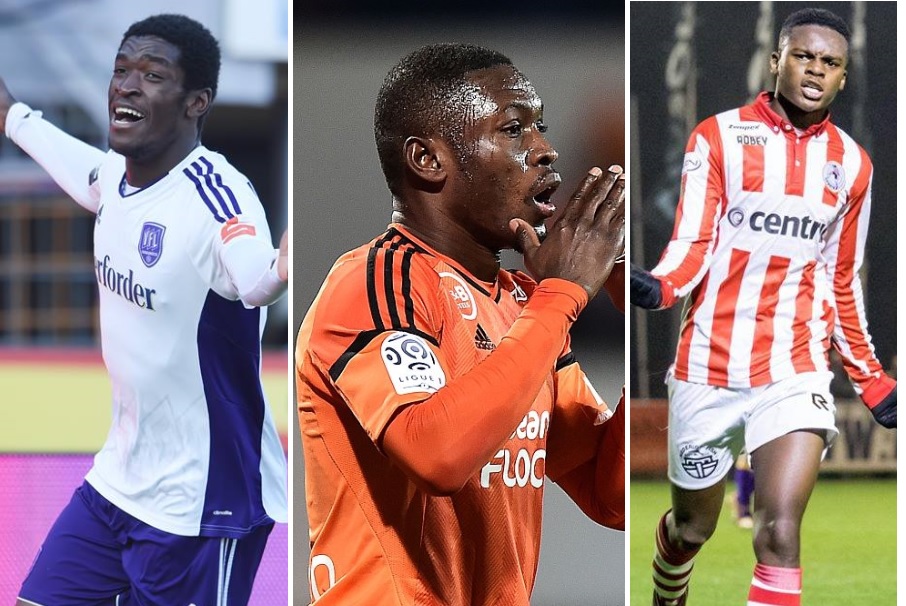 Andre Ayew was influential for West Ham United and Agyemang-Badu flourished for Udinese.

GHANAsoccernet.com's El Akyereko has more on how Ghanaian players fared abroad this weekend.

Striker Kwesi Appiah could not make the Crystal Palace team when they held Hull City to a 3-3 draw.

Daniel Amartey was in a delightful form for Leicester City who smashed Manchester City into pieces, beating them 4-2. Jeffrey Schlupp was not part of the Foxes of squad for the game.

Andre Ayew played 67 minutes for West Ham United and assisted one of their goals as they drew 2-2 with Liverpool at Anfield.

Dutch-born Ghanaian Timothy Fosu-Mensah lost his place in the Manchester United team as they pipped Tottenham Hotspur 1-0 at the Old Trafford.

In the Championship, Elvis Manu could not make the Brighton squad for their 2-0 win over Leeds United on Friday. But he scored for their U23 side during the week.

Aston Villa restored their winning run with a 1-0 win over Wigan Athletic at the Villa Park. Both Jordan Ayew and Albert Adomah started the game for Steven Bruce's side.

Belgian-born Ghanaian Denis Odoi watched from the Fulham bench as the Cottagers held Wolverhampton Wanderers to a 4-4 draw on Saturday.

Chelsea loanee Christian Atsu was introduced to play the last 20 minutes of normal time for Newcastle United as they battered Birmingham City 4-0.

In the Premier League Reserves League, English-born Ghanaian starlet Denzeil Boadu played until he was replaced in the second-half by Manchester City U23 side that beat Reading U23 2-1.

Chelsea loanee Abdul Baba Rahman was booked in the 81st minute while in action for Schalke 04 who lost 1-0 against Bayer Leverkusen. His Ghanaian compatriot Bernard Tekpetey could not make the squad for the game.

Phil Ofosu-Ayeh watched the game from the bench as his Eintracht Braunschweig side claimed a 3-2 win over Arminia Bielefeld. However defender Joe Baffo could not make the squad for the game.

Defender Jans Gyamerah was at the heart of defence for Bochum who won 1-0 against 1860 Munich.

Youngster David Atanga could not make the Heidenheim squad for their 3-0 win over Union Berlin.

Manfred Osei-Kwadwo was replaced in the second-half by Sonnenhof in their 2-1 away win over Holstein Kiel. Former Dortmund midfielder Evans Owusu Nyarko could not make the Kiel team for the game.

Forward Okyere Wriedt scored the solitary goal of the game for Osnabruck in their 1-0 win over Zwickau. Defender Marcel Appiah also played the full 90 minutes.

In the Regionalliga, midfielder Mike Owusu could not make the Hertha Berlin II squad for their 2-1 home loss against Lokomotive Leipzig.

Joe Gyau was introduced in second-half stoppage-time by Dortmund II in their 1-0 win over Wattenscheid 09.

Stuttgart II swapped places with Pirmasens after punishing them 4-1. Ghanaian youngster Prince Owusu came off the bench to play the last 5 minutes for Stuttgart.

Midfielder Emmanuel Agyemang-Badu flourished in midfield for Udinese who silenced Atalanta 3-1 at the Stadio Atleti Azzurri.

Youngster Godfred Donsah continued his bench-warming exercising at Bologna as he sat on the bench in their 0-0 draw with Empoli on Sunday.

Afriyie Acquah was introduced to play the last 9 minutes of normal time for Torino who were brushed aside 3-1 by Juventus at the Stadio Olimpico Grande Torino. Kwadwo Asamoah was dropped to the Old Ladies bench.

In the Serie B, Ransford Selasi warmed the Novara bench in their 0-0 draw with Brescia.

Kingsley Boateng came off the Bari bench in the second-half to play in their 0-0 draw at Pisa.

Benevento managed to squeeze a point from Avellino after holding them to a 1-1 draw. Both Raman Chibsah and Bright Gyamfi played for Benevento while Patrick Asmah featured for the home side. But Isaac Donkor was not in their squad for the game.

Latina played their 4th draw on a row after sharing the points with Ascoli in a 2-2 draw. Striker Richmond Boakye returned from injury to warm the Latina bench but Maxwell Boadi was not in their squad. However Bright Addae played the full 90 minutes for Ascoli.

Masahudu Alhassan was out of the Perugia team that won 1-0 against Pro Vercelli.

Moses Odjer was not part of the Salernitana team that won 3-1 against Frosinone.

Daniel Kofi Agyei played for Ancona in their 1-0 away win over Sambenedettese in the third-tier league.

Alimeyaw Salifu and Prince Besea were both on the Modena bench in their 1-0 loss at Mantova.

In the Primavera League, youngster Stephen Danso warmed the bench for Inter Milan as they posted a 4-0 win over Frosinone.

Dutch-born Ghanaian midfielder Derrick Luckassen was in action for AZ Alkmaar who got hammered 4-0 by in-form Feyenoord Rotterdam.

Manchester City starlet Yaw Yeboah came off the bench in the 65th minute to inspire FC Twente to a 1-0 win over Ajax Amsterdam on Sunday.

There was no Quincy Owusu-Abeyie in the NEC Nijmegen squad for their 3-0 win over ADO Den Haag. However Reagy Ofosu sat on the NEC bench.

Asumah Ankrah was introduced in the 87th minute by Willem II who held PEC Zwolle to a 0-0 draw.

In the second-tier league, Raymond Gyasi could not make the Cambuur squad for their 4-2 win over FC Utrecht II. Ghanaian forward Rodney Antwi was not in the Utrecht squad for the game.

Meanwhile veteran Fred Benson was not in the RKC Waalwijk side that lost 6-2 at Almere City.

Thomas Agyepong was introduced in the 71st minute by NAC Breda who lost 6-2 against FC Eindhoven.

Johnathan Opoku Agyemang scored the opener for VVV-Venlo in their 2-1 win at Emmen.

Felicia Lovette Ofori scored a classy finish for Sparta II in their 3-1 win over GVVV.

Veteran defender Carlos Opoku scored to earn a point for Koninklijke HFC in their 1-1 draw with FC Twente II.

Nana Kwesi Appiah returned from injury to play the first 45 minutes for Gent in their 1-1 draw with KV Oostende.

Eric Ocansey was not part of the AS Eupen side that drew 2-2 with Sporting Chaleroi on Saturday.

In the First Division B, forward William Owusu Acheampong played full throttle for FC Antwerp in their 1-1 draw with Tubize.

Issahaku Yakubu was in full time action for Lierse SK in their 1-0 away win over Cercle Brugge. Midfielder Charles Ankomah was a bench warmer.

Danish-born Kevin Mensah was not part of the Esbjerg squad that defeated Randers FC 2-0.

Togo-target Ibrahim Moro was in full time action for Silkeborg in their 1-1 draw with Lynby on Saturday.

Joseph Mensah could not make the Horsens squad for their 3-0 home win over AaB.

Both Ernest Asante and Godsway Donyoh played for Nordsjaelland in their 0-0 stalemate with SønderjyskE on Friday. However Divine Naah and Dominic Oduro were not in their squad for the game.

Wakaso Mubarak was not part of the Panathinaikos squad that pipped Atromitos 1-0 at the own backyard.

Owusu-Ansah Kontor sat on the bench for Larissa in their 1-0 away loss at Xanthi.

Both Michael Asigba and Jeffrey Sarpong were in action for Veria as they earned a point at Asteras Tripolis, holding them to a 0-0 draw.

In the second-tier league, midfielder Joachim Adukor was in action for OFI Crete who won 3-0 against Chania.

Former Bechem United forward Eric Warden played for Kallithea in their 3-1 away loss at Acharnaikos.

Samuel Danquah played for Anagennisi and helped them to consign Aiginiakos to a 3-0 defeat.

Midfielder Aziz Tetteh was dropped to the Lech Poznan bench as they beat Korona Kielce 1-0 on Sunday.

Belgian-born Ghanaian Vadis Odjidja-Ofoe scored for Legia Warsaw who hammered Piast Gliwice 5-1. Forward Saddam Sulley could not make their squad for the game.

Portimonense held Leixões to a 0-0 draw. Ghanaian defender Lumor Agbenyenu played for the away side but Emmanuel Sarpong could not make their squad for the game.

Attacker Emmanuel Boateng scored the consolation goal for Moreirense in their 2-1 loss at Chave.

In the second-tier league, both Kwame Nsor and Emmanuel Hackman played for União Madeira and Desportivo Aves respectively as Aves won 3-1.

Richard Ofori and Henry Mendarius both played for Sporting Covilhã in their 0-0 draw with Gil Vicente.

Ernest Ohemeng played for Académica who won 2-1 against Benfica II.

Mohammed Razaq, Kwasi George and Rashid Sumaila played for Al Gharafa in their 2-1 loss at Al Sailiya in the Star League.

Both John Benson and Fred Dabanka played the full 90 minutes for Al Ahli in their 1-1 draw with Al Shahaniya.

Las Palmas drew 1-1 with Leganes. Kevin Boateng was not part of the Las Palmas squad for the game.

Goalkeeper Razak Brimah continued his bench-warming exercise at Cordoba as he warmed the bench in their 3-1 home loss against Cadiz on Sunday.

Striker Ebenezer Assifuah was introduced in the second-half by FC Sion who won 3-1 aganst Luzern Sport. But Ishmael Yartey was not part of their squad for the game.

Young Boys made it four wins out of four after defeating FC Thun 3-2. Kwadwo Duah was unused by Boys while Kasim Nuhu missed the game with injury. Meanwhile Swiss-born Kwesi Wuthrich is out for the rest of the season.

Defender Nuru Sulley was a pillar in defence for Alanyaspor as they beat Karabükspor 2-0. However former Liberty Professionals man Isaac Sackey missed the game.

Defender Joseph Attamah was booked in the 73rd minute and played the entire minutes of the for Istanbul in their 0-0 draw with Gençlerbirliği.

Fatau Mohammed was sent off while in action for Gaziantepspor in their 3-1 away loss at Galatasaray.

In the second-tier league, Jerry Akaminko warmed the bench for Eskişehirspor in their away win over Samsunspor.

Defender John Boye was a pillar in defence for Sivasspor in their 3-0 win over Goztepe.

There was no Seidu Salifu in the Adana Demirspor team that slipped to a 2-1 loss against Boluspor.

Striker Kwame Karikari played the entire 90 minutes for Stal Kamianske as they lost 2-0 against FC Zorya. Aruba international of Ghanaian descent Erixon Danso came off the bench to play for Stal.

Meanwhile midfielder Reuben Acquah played for Tirana in their 1-1 draw with Korabi Peshkopi on Saturday.

And, attacker Samuel Afum played for Wadi Degla who suffered a 2-1 home defeat to Al Mokawloon.

Striker Majeed Waris scored in his fourth straight game for Lorient as they recorded a 3-2 loss at Toulouse on Saturday.

Former Ghana U20 midfielder Geoffrey Acheampong could not make the Bastia squad for their 2-0 win over Metz.

2015 Ghana U20 defender Emmanuel Ntim warmed the Valenciennes bench in their 2-2 draw with Red Star in the Ligue 2.

In the third-tier league, Charles Boateng played the entire minutes for Avranches in their 2-0 win over CA Bastia.

Rangers posted a 2-0 win over Hearts. Former Leicester City starlet Joe Dodoo came off the bench in the 87th minutes to play for Rangers but Prince Buaben was unused by Hearts.

Black Stars captain Asamoah Gyan returned from injury to play for Al Ahli in their 1-0 away win over Al Sharjah.