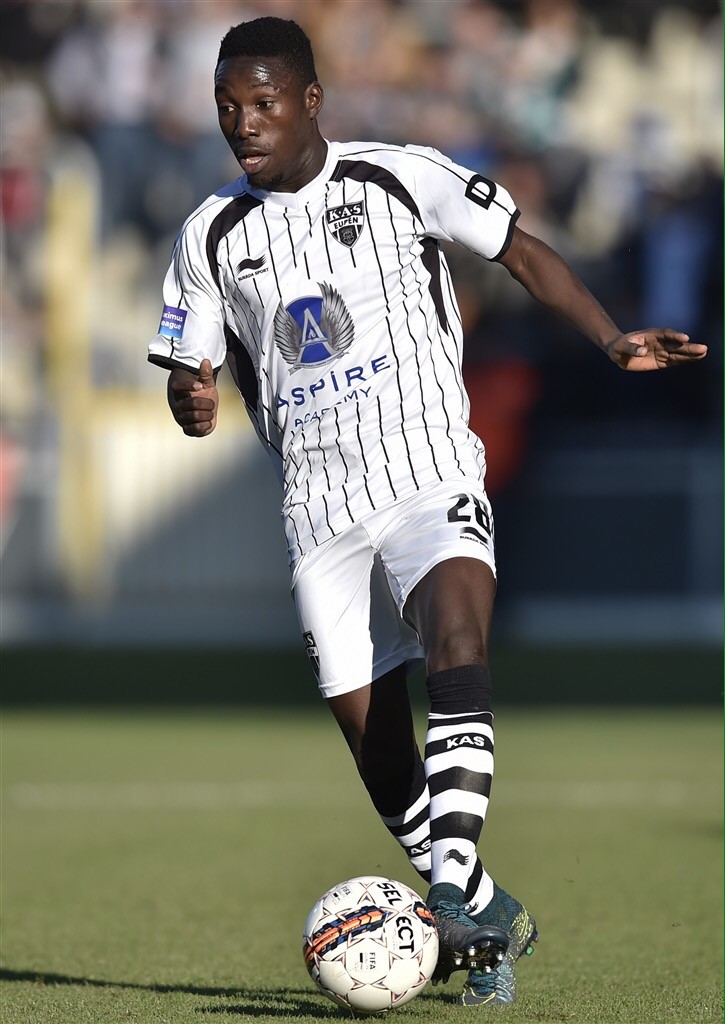 There were some superb displays by Ghanaian players across the globe this weekend as TEN players were on target for their various clubs.

Former Hearts of Oak forward Mahatma Otoo was unplayable as he followed up the goal he scored last week with a sumptuous brace for Balikesirspor likewise Eric Ocansey, who powered KAS Eupen to victory with a sweet double.

Reuben Obodai has a lowdown on how Ghanaian players fared across the globe over the weekend.

Andre Ayew was introduced at half time for West Ham in their 3-0 home defeat to Brighton Albion and Hoven on Friday night.

Jordan Ayew registered an assist for Swansea City as they lost 2-1 at home to Daniel Amartey’s Leicester City. Amartey was an unused substitute.

In the Championship, Albert Adomah scored for Aston Villa in their 2-1 win against Denis Odoi’s Fulham. Odoi was an unused substitute.

Andy Yiadom warmed the bench for the second successive weeks as Barnsley lost 1-0 to Hull City at the Oakwell.

In the League One, striker Kwesi Appiah was not included in AFC Wimbledon squad that lost 1-0 at home to Plymouth Argyle.

Striker Tarique Fosu’s lasted 86 minutes for Charlton Atletics in their 1-0 win at Bradford City while Joe Dodoo continued his bench warming role for the side.

In the League Two, midfielder Hiram Boateng enjoyed his first 90 minutes for Exeter City in their 1-0 home loss to Port Vale.

Midfielder Nortei Nortey warmed the bench for Dover Athletic as they played out a 1-1 draw with Maidenhead.

Koby Arthur was an unused substitute for Macclesfield in their 1-0 win at Leyton Orient.

Thomas Partey picked a booking but saw out full period for Atletico Madrid in their 1-0 away win over Celta Vigo at the Balaidos.

Emmanuel Boateng was not added to Levante squad that played out a pulsating 1-1 draw with Getafe at home.

Mubarak Wakaso was in superb form for Depotivo Alaves but they lost 2-0 to Real Betis.

In the Segunda Division, Yaw Yeboah made a cameo appearance for Oviedo in their 2-0 home win over Cordoba. His compatriot and teammate Owusu Kwabena warmed the bench.

Kwadwo Asamoah warmed the bench for Juventus as they humialated Udinese 6-2 at the Stade de Friuli.

Afriyie Acquah returned from a minor knock to warm the bench for Torino in their 1-0 loss at home to AS Roma.

Alfred Duncan lasted 47 minutes for Sassuolo in their 1-0 win at Spal.

Godfred Donsah was excellent in midfield for Bologna in their 1-0 loss at Atalanta.

Rahman Chibsah picked a booking but lasted entire period for Benevento Calcio as they lost 3-0 at home to Fiorentina. Bright Gyamfi also saw 90 minutes for Marco Baroni’s side.

In the Serie B, Bright Addae missed Ascoli 3-3 home draw with Venezia through suspension.

Defender Isaac Donkor returned from injury to play 69 minutes for AC Cesena in their 3-3 home draw with Foggia.

Moses Odjer was introduced in the 63rd minute for Salernitana in their 1-1 home draw with Emmanuel Besea’s Frosinone. Patrick Asmah warmed the bench for Salernitana.

Enock Kwarteng was not included in Nantes match day squad that recorded a 2-1 home win over Guingamp.

Abdul Majeed Waris scored the winner for Lorient in their 2-1 victory at Orleans.

Grejohn Kyei lasted 63 minutes for Stade Riems in their 1-0 win at Lens.

Daniel Opare was not at his usual best as Augsburg were beaten 2-1 at home by Hannover 96.

Defender Joseph Baffo suffered an injury for Eintracht Brauschweig in their 1-0 win over Bochum.

Defender Marcel Appiah kept his place in VfL Osnabruck side with another 90 minutes under his belt but they lost 2-0 to Hansa Rostock.

Kadiri Mohammed came off the bench to pick a booking for Austria Vienna in their 1-0 home defeat to Rapid Vienna in the Vienna derby.

Bernard Tekpetey was an unused substitute for Altach in their 3-2 home win over AC Wolfsberger.

David Atanga played full throttle for FC Liefering as they held FAC Wien to a 2-2 draw while Samuel Tetteh lasted 59 minutes for Liefering.

Kennedy Boateng lasted 51 minutes for Reid in their 1-1 draw at Wacker Innsbruck.

After scoring his debut goal for Austria Lustenau last week, Majeed Ashimeru enjoyed another 90 minutes for the side in their 2-0 home win over Wattens.

Midfielder Samuel Asamoah lasted the entire period for Sint Triudense as they pip Oostende 1-0 at home.

Eric Ocansey scored a brace for KAS Eupen in their 4-1 win over KV Mechelen.

Ghanaian duo Bennard Kumordzi and Nana Akwesi Asare both played the entire duration for Kortrijk and KAA Gent respectively in their 1-1 draw.

Nana Opoku Ampomah scored for Waasland-Beveren in their 5-2 remarkable victory at Zulte Waregem.

Osah Bernardinho Tetteh was an unused substitute for Westerlo in their 0-0 draw with KSV Roeselare.

Joel Fameyeh came off the bench to score for Dinamo Brest as they walloped Naftan 4-0. Saliw Babawo warmed the bench for Brest.

Dickson Afoakwa lasted 59 minutes for Gomel FC in their 3-0 away defeat to Neman. Evans Edomanko, meanwhile warmed the bench for Gomel.

Carlos Ohene was introduced in the 51st minute for Beroe in their 1-0 win at Bistritsa.

Ishmael Baidu was introduced in the 53rd minute for Septemvri Sofia as they shocked Vareya 1-0 away.

Midfielder Maxwell Boadu Acosty was taken off in the 53rd minute for Rijeka in their 2-1 home loss to Osijek.

German-born of Ghanaian descent Reagy Ofosu lasted 67 minutes for Istra 1961 in their 1-0 loss at Lokomotive Zagreb.

Obeng Regan made a cameo appearance for Inter Zapresic as they defeated Rudes 3-1 at home.

Frank Acheampong was taken off on the 80th minute mark for Tianjin Teda as they beat Beijin Guoan 2-0 at home.

Joseph Mensah was not included in AC Horsen squad that lost 4-2 at Midtjylland on Friday.

Ibrahim Moro played full throttle for Silkeborg in their 1-0 win over Sonderjyske.

Kelvin Mensah returned from injury to warm the bench for Brondby in their 1-0 win at Helsingor.

Nana Welbeck was not included in Odense OB squad that played 1-1 at Lyngby.

Ernest Asante lasted 54 minutes for FC Nordsjaelland in their 4-0 defeat at Hobro. His compatriots Collins Tanor and Godsway Donyoh both missed the clash through injuries.

Baba Mensah lasted the entire period for Ilves in their 1-0 home win over PS Kemi. His compatriot and teammate Reuben Ayarna, however picked a booking and was substituted in the 52nd minute.

Evans Mensah lasted 59 minutes for HJK Helsinki in their 3-1 over Inter Turku while compatriot Anthony Annan warmed the bench.

Seth Paintsil scored his 10th league goal for Jaro FF in their 1-1 draw at IF Gnistan.

Joseph Paintsil played full throttle for Ferencvarosi in their 1-0 win over Ujpest.

Patrick Twumasi could not continue his midweek exploits for Astana FC as he missed their 2-1 loss to Ordabasy through suspension.

Hard-tackling defender Rashid Sumaila opened his account for Al Qadsia with a powerful header in their 3-1 loss at Al Jahra SC on Friday.

Midfielder Abraham Ashrifie was not included in Metta/LU squad that played 1-1 with Jelgava.

David Addy was not included in Riga FC squad that lost 1-0 at home to RFS.

Rashid Obuobi won a penalty for Ventspils in their 1-1 stalemate at FK Leipaja.

Defender Derrick Luckassen warmed the bench for PSV Eindhoven in their 3-0 home win over Heracles Armelo.

Gilbert Koomson scored for Sogndal in their 3-3 stalemate with Sarpsborg 08.

Adam Kwarasey was phenomenal for Valeranga as they mauled Viking 7-1.

Raymond Gyasi lasted full period for Stabaek in their 2-1 home loss to Tromso.

Edwin Gyasi enjoyed full period of action for Aalesund in their 1-1 draw against Kristiansund.

Prince Buaben picked a booking for Hearts of Midlothian in their 1-0 win over St Johnstone.

Frank Arhin and Patrick Kpozo warmed the bench for Ostersunds in their 1-0 win at Goteborg while Samuel Mensah missed the game through suspension.

Nasiru Mohammed enjoyed full throttle for Hacken BK in their 1-1 away draw with Djurgarden while Mohammed Abubakar was introduced in the 64th minute.

Sabah Lawson made a cameo appearance for Varbergs in their 0-0 draw with Orgryte. Meanwhile, Thomas Boakye missed the game for Varbegs.

Edwin Gyimah missed Helsingborg’s 1-1 away draw with Degerfors through suspension.

Prosper Kasim lasted 71 minutes for Norrby in their 2-1 loss at GAIS.

Anas Mohammed picked a booking for Free State Stars in their 1-1 home draw with Platinum Stars. Mumuni Abubakar meanwhile, was not included in the match day squad.

Razak Brimah was beaten twice in goal as Mamelodi Sundowns lost 2-1 at home to Amazulu.

Nana Akorsah did not travel with Cape Town City FC to Chippa United as they lost 2-1.

Raphael Dwamena played full throttle for FC Zurich as they were walloped 4-0 at home by Grasshoppers.

Kasim Nuhu picked a booking for Young Boys in their 1-0 win at Luzern.

Richmond Boakye-Yiadom failed to recover from the injury he suffered in midweek in the Europa League against Arsenal as he missed Red Star Belgrade 2-1 win over Mladost. Defender Abraham Frimpong also missed the game through injury.

Samuel Owusu lasted 86 minutes for Cukaricki in their shocking 0-0 draw with Subotica.

Ghanaian duo Ibrahim Arafat Mensah and Derick Mensah both picked bookings but completed full minutes for Aluminij in their 2-1 win at Celje.

Dutch-born Ghanaian defender Mitch Apau picked a booking but completed 90 minutes for NK Olimpija Ljubljana in their 3-0 against Triglav while teammate and compatriot Kingsley Boateng made a cameo appearance. However, Olimpija striker Abass Issah missed the through injury.

Striker Sadam Sulley lasted 71 minutes for Zemplin Michalovce in their 0-0 stalemate with Nitra.

Hans Nunoo Sarpei played full period of action for FK Senica as they were humbled 3-0 at home by Ruzomberok.

Asamoah Gyan warmed the bench for Kayserispor in their 2-1 home win over Konyaspor.

Bernard Mensah lasted 78 minutes for Kasimpasa in their 2-1 loss at Antalyaspor.

Issac Sackey picked a caution and lasted 45 minutes for Alanyaspor in their 3-3 draw against Goztepespor.

Kamal Issah made a cameo appearance for Genclerbirligi in their 3-3 draw at Akhisar Genclik Spor while Elvis Manu warmed the bench for the visitors.

Jerry Akaminko was deployed as a right back for Eskisehirspor in their 3-1 home win against Erzurum BB.

Former Hearts of Oak talisman Mahatma Otoo continued his scintillating start to Balikesirspor career as he scored a brace in their side’s 4-2 away win over Boluspor.

Striker Dominic Adiyiah scored the winner for Nahkon Ratchasima in their 2-1 win over Ubon.

Dutch-born Ghanaian defender Johan Kappelhof, who has been nominated for MLS defender for the season, played full throttle for Chicago Fire in their 3-0 loss at Dynamo Houston. David Accam lasted 71 minutes for the Fire.

Dominic Oduro warmed the bench for Montreal Impact in their 3-2 loss at home to New England Revolution. Gershon Koffie saw 90 minutes of action for the winners.

Abu Danladi was introduced in the 67th minute for Minnesota United in their 3-2 loss at San Jose Earthquakes.

Bismark Adjei-Boateng  lasted 68 minutes for Colorado Rapids in their 2-1 defeat at Seattle Sounders.

Charles Sapong scored for Philadelphia Union in their 6-1 walloping of Orlando City. Joshua Yaro missed the game for Union through injury.

Kwadwo Poku lasted 82 minutes for Miami FC in their 2-0 win at Edmonton.

Michael Kafari warmed the bench for Puerto Rico in their 2-1 at Indy Eleven.

Mustapha Essuman lasted 71 minutes for Buildcon in their 1-1 home draw with Nakambala Leopards.