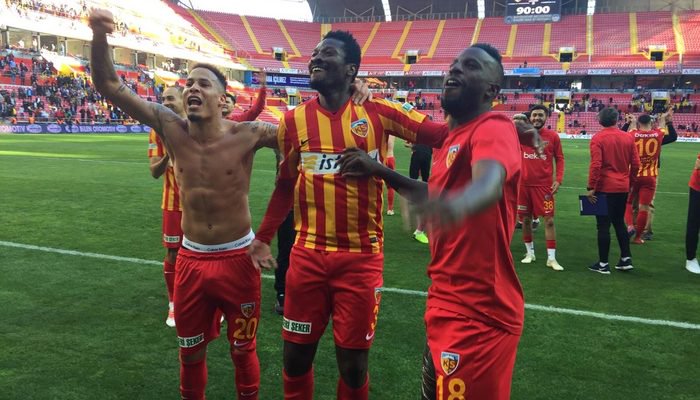 European football specialist, Herbert Boakye Yiadom brings to you a comprehensive update on how Ghanaian players performed abroad in their respective leagues this weekend.

The season is about wrapping up and most Ghanaian players abroad have intensified their performances as they hope to make it to the 2019 Africa Cup of Nations to be staged in Egypt.

The 23-man squad is being battled for by thousands of players at home and abroad.

GHANAsoccernet brings to you how these players fared in their respective leagues.

I start off with Asamoah Gyan came off the bench in the 54th minute to score a brace for Kayerispor as they came back from a goal to win 2-1 against Kasimpasa.

Thomas Agyepong played over the weekend for Hibernian as they lost against Kilmarnock. Agyepong saw 35 minutes of action in the game. The Man City player on loan was sidelined with injury for weeks and is racing to be in shape for the 2019 Africa Cup of Nations.

In the Premier League, Christian Astu lasted 66 minutes for Newcastle as they thrashed Fulham by 4-0.

Daniel Amartey missed Leicester’s game against Chelsea due to injury

In League One, Tarique Fosu was not included in the squad for Charlton Athletic as they won 2-1 against Doncaster in the League One play offs

In the La Liga, Thomas Partey played the entire duration for Atletico Madrid in their 1-0 win over Seville

Patrick Twumasi saw 16 minutes of action for Alves as they lost to Valencia by 3-1. Mubarak Wakaso was on the bench for Alves

In the La Liga 2, Yaw Yeboah came off the bench in the 88th minute for Numancia in their 2-0 win over Alcorcon

In the Serie A, Alfred Duncan saw 79 minutes of action for Sassuolo as they lost to Torino by 3-2. Claud Agyapong was unused substitute in the game

In the Serie B, Bright Addai warmed the bench for Ascoli as they lost to Crotone by 3-0

In the Ligue 1, Baba Rahman missed the game for Reims as they lost 3-2 against Caen

In the Ligue 2, John Boye played the entire duration for FC Metz against Nancy which they lost by a lone goal

In the Bundesliga, Luckassen Derrick missed the game for Hertha Berlin against Augsburg

In the Bundesliga II, Bernard Tekpertey saw 21 minutes of action for Paderbon in their 4-1 win over Hamburger. Christopher Antwi-Adjei scored a brace on the day for Paderbon

In the Budesliga III, Kyere-Mensah Bernard was sent off as Fortuna Koln as they lost to Munich 1860 by 3-2. Team mate Christopher Antwi was not included in the match day squad

Agyemang Diawusie came off the bench in the 74th minute for SV Wehen in their 1-0 win against Osnabruck. Kyereh Daniel warmed the bench for Wehen

Nana Asare played the entire duration for Gent as they beat St. Liege by 3-2

Elton Acolatse played 45 minutes for St. Truiden as they drew 2-2 against Eupen. Eric Ocansey was the bench for Eupen

Acosty Boadu Maxwell warmed the bench for Rijeka as they drew against D.Zagreb

Regan Obeng scored for Istra 1961 as they lost to Gorcia by 4-1. Nasiru Moro warmed the bench for the winners.

Abdul-Aziz Yakubu featured for Guimaraes as they thrashed Belenenses 5-1. Joseph Amoah and Henry Medarious were on the bench for the winners

In the Segunda division, Kwame Nsor scored for Academico Viseu in their game against Penafil

Richmond Boakye Yiadom was missing in action for Crevan Zvezda as they defeated Proleter by 1-0. Joseph Bempah warmed the bench for the losers

Patrick Asmah was not included in the match day squad for Senica in their 3-2 win over Nitra. Fellow compatriot Edmund Addo missed the game for Senica.

Osman Bukari played the entire duration for Trencin as they lost 2-1 against Z.Moravce. Mohammed Lamine was unused substitute in the game

Benson Anang lasted 90 minutes for Zilina as they were defeated by Slovan Bratislava. Michu Apau saw 81 minutes of action for the winners

Majeed Ashiremu and Nuhu Musah both featured for St.Gallen in their 2-1 win over Sion

Asamoah Gyan came off the bench in the 54th minute to score a brace for Kayerispor as they won 2-1 against Kasimpasa. Bernard Mensah also played for Kayerispor after his long injury lay off

David Accam and Jonathan Mensah both featured for Columbus Crew as they lost to Los Angeles FC by 3-0.  Harrison Afful missed the game for the losers due to injury while Latif Blessing played the entire duration for the winners.