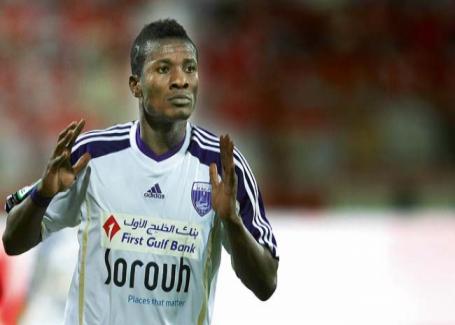 Asamoah Gyan continued his scoring form in the UAE and Isaac Vorsah saw red in the Bundesliga. GHANAsoccernet.comâ€™ Akyereko Frimpong-Manson has more.Â

Emmanuel Frimpong warmed the Arsenal bench when the suffered a 1-0 loss at Manchester City.

There was neither Jeffrey Schulpp nor John Pantsil in the Leicester City 18-man squad that slipped to a 2-1 loss to relegation-trapped Doncaster Rovers.

Elsewhere in the League One, on loan Liverpool young striker David Amoo played 90 minutes for Bury who were held to a 1-1 draw by Brentford.

In the Conference National League, Andy Yiadom set up both goals for Braintree Town as they cruised to a 2-1 win over AFC Telford United.

In the Scottish Premier League, Junior Agogo was excluded from the Hibernian team that lost 1-0 at Aberdeen.

Winger Quincy Owusu-Abeyie played 62 minutes for Panathinaikos when they defeated Asteras Tripolis 3-1 to narrow the point gap between them and Olympiakos to one.

Dijon-bound Bernard Yao Kumordzi did not travel with the Panionios team who recorded a 1-0 loss at Xanthi.

Abdul Osman was also involved full time action for Kerkyra as they nicked a vital away point from OFI Crete.

Abdul Yakeen Iddi was absent from duty when his KV Mechelen managed to squeeze a point out of Sint-Truiden after churning out a 0-0 draw.

Lierse SK ended their four-match winless streak in smooth fashion with a comfortable 2-0 victory over Kortrijk.

Injured versatile defender Rahim Ayew watched the game from the stands while Cofie Bekoe still has his documentation issues not sorted out.

William Owusu-Acheampong did not play for Westerlo who beat Germinal Beerschot 3-1.

Standard Liege recorded a third consecutive draw in the Belgian Pro League after being held at home by Genk.

Daniel Opare was excluded from the Standard Liege team.

Anderlecht stretched their lead at the top of the table to five points after brushing aside visiting Lokeren 3-2. Dennis Odoi played two minutes for Anderlecht.

Frederick Boi scored on the 90thÂ  mark to help OH Leuven to record a comfortable 3-1 win over Club Brugge.

Sensational youth midfielder Christian Atsu Twasam scored the consolation for Rio Ave as they slipped to a disgraceful 5-1 defeat against Benfica.

Vitesse Arnhem moved up to fifth place at the expense of Heracles Almelo after beating them 1-0 at their own backyard.

Kwame Quansah was unable to help his side avenge defeat at hands of a Vitesse side that consisted of Black Stars midfielder Anthony Annan and Belgian-born Ghanaian Stanley Aborah Junior.

FC Utrecht dropped further down the table after going down 1-0 at FC Groningen. Skipper Nana Akwesi Asare conspicuously missed out of the FC Utrecht team.

Elsewhere in the Eerste Divisie, Mitch Apau lasted the entire 90 minutes for Veendam who succumbed to a 2-1 defeat to Sparta Rotterdam.

Striker Gideon Boateng played the entire second half for MVV in their disgraceful 4-1 home drubbing by Den Bosch.

Caen recorded their fourth straight defeat after going down 2-1 to Nancy at their own backyard.

Jerry Vandam was not in the best of shapes as he was replaced after 58 minutes.

Jordan Ayew played 85 minutes for Marseille but Andre Ayew sat out due to suspension.

Black Stars defender Jonathan Mensah finally made his comeback from injury but sat on the substitute bench for Evian Thonon Gaillard who lost 2-1 to giants Olympique Lyon.

Midfielder Rabiu Mohammed was introduced after 77 minutes. There was no John Mensah in the Lyon team.

Elsewhere in the Ligue 2, Moussa Narry played the full 90 minutes of Le Mans 2-2 draw with Angers.

Speedster Haminu Dramani was left out of the Arles Avignon first team that returned from their trip to Sedan with a point.

In the reserves league, Ghana U20 defender Kamal Issah was replaced after 62 minutes after picking an ankle injury in their 2-1 defeat at Granville.

Former Asante Kotoko midfielder Francis Akwaffo scored the only goal of the match for Al Ittihad as they recorded a 1-0 victory over El Geish who also featured former Liberty Professionals striker Ernest Papa-Arko.

Eric Bekoe made his much-awaited injury return on Saturday by coming off the bench to play nine minutes for Petrojet in their 0-0 draw with FC Smouha.

Goalkeeper Jonathan Aryeetey was at duty for Krabi FC who are poised for promotion into the top flight as they drew one-all with Reyung FC.

He was assigned a defensive midfield role and he played 66 minutes before being replaced.

Kwadwo Asamoah was in fine form for Udinese in their two-all drawn game at Lazio. Emmanuel Agyemang-Badu did not make the trip to ankle injury.

Kevin-Prince Boateng won a penalty for AC Milan to help them defeat Siena 2-0 at the San Siro. He was replaced after 73 minutes.

Sulley Muntari did not make the trip with Inter Milan to Cesena as they returned with all three points after winning 1-0.

Afriyie Acquah did not feature in Palermo's 2-0 away reverse to Catania.

In the Serie B, young midfielder Mase Nana Addo Welbeck sat on the bench for Brescia who put an inspiring display to win 2-0 at Livorno.

Isaac Cofie and Richmond Boakye-Yiadom were replaced in the second half as their Sassuolo side squeezed a vital away point out of Reggina after drawing 1-1.

Ghana defender Isaac Vorsah got sent off on the 63rd minute after receiving a straight red card in TSG Hoffenheim's 1-1 drawn game with Hertha Berlin.

Hans Adu-Sarpei watched from the stands at the Veltins Arena as his Schalke 04 demolished Werder Bremen 5-0 to move up to third place.

Young defender Leonard Sowah could not break into the Hamburg SV first team squad as they were held to a 1-1 draw by new boys Augsburg.

Winger Mohammed Lartey missed the tie due to injury.

Phil Ofosu-Aryeh was an unused substitute for Rot-WeiÃŸ Erfurt who suffered a slim 1-0 loss at Carl Zeiss Jena.

Agyemang was replaced after 75 minutes. Marcel Appiah warmed the bench for Bielefeld.

Young Udinese midfielder Richard Boateng remained with the Granada FC second team over the weekend as they won 2-1 over Levante.

There was no Jeffrey Sarpong in the Real Sociedad first team squad when they shared the spoils with Racing Santander in a 0-0 draw.

Former NAC Breda forward Matthew Amoah failed to break into the Mersin first team squad as they thrashed Karabukspor 5-3 in the Super Lig.

Striker Prince Tagoe did not the 18-man squad for Bursaspor as they drew 0-0 with Antalyaspor.

Jerry Akaminko played 90 minutes for Manisaspor in the 0-1 home reverse to Genclerbirligi.

On Friday, striker Emmanuel Banahene came off the bench in the 71st minute to play in Orduspor's 2-0 loss to Galatasaray.

In the second-tier, Paul Aidoo lasted the entire regulation minutes for relegation threatened Gungorenspor who recorded a 3-2 home defeat to Giresunspor.

Obed Owusu was introduced after 41 minutes but former Hearts of Oak player Benjamin Boateng warmed the bench for Gungorenspor.

Dominic Adiyiah continued to remain out of first team action for Karsiyaka as he lost his place in the first team in their 2-0 win over Akhisar.

Bismark Idan played 15 minutes for GÃ¶ztepe in their 2-1 defeat at Konyaspor.