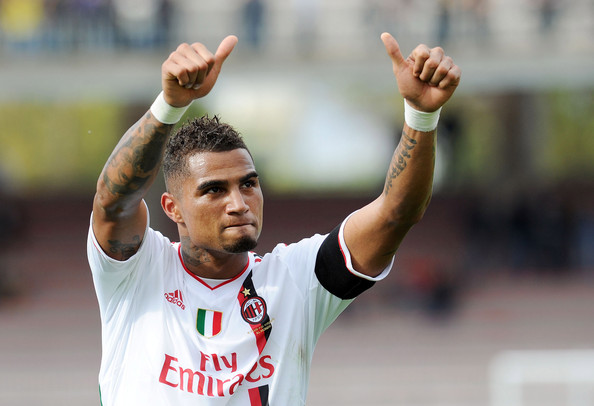 Kevin-Prince Boateng showed his importance to AC Milan squad by scoring a hat-trick which sparked a 4-3 win over Lecce.

GHANAsoccernet.com has more on how players fared abroad after another weekend.

Robin van Persie came off the bench to score a double to sink Stoke City 3-1 at the Emirates Stadium.

In the Npower Championship, Leeds United stretched their unbeaten run to five game after comprehensively beating Peterborough United 3-2 at the London Road Stadium.

Winger Lloyd Sam was introduced on the 48th minute and got booked on the 64th minute.

Elsewhere at the King Power Stadium, Black Stars full-back John Pantsil warmed the bench for Leicester City who suffered a 3-0 loss to Millwall.

Box-to-box midfielder Prince Buaben watched from the bench as his Watford surrendered a 2-1 lead to lose 3-2 at Hull City.

Bristol City remained at the foot of the table after losing 2-0 at home to Birmingham City.

Young striker Akwasi Asante did not make the trip with Birmingham City.

Schalke 04 moved to third place after piping Bayer Leverkusen 1-0 at the BayArena. Hans Adu-Sarpei lost his place in the Schalke 04 first team.

Ghana center-back Isaac Vorsah was a rock in defence for Hoffenheim and lasted the entire duration of the game.

In the Liga 3, neither Marcel Appiah nor Eric Agyemang played in Arminia Bielefeld's 2-1 win over SpVgg Unterhaching.

Andre Ayew put up an impressive performance to score all two goals in Marseille's 2-0 win over Ajaccio on Saturday.

Defender Jerry Vandam lasted the entire duration of the match for ten-man Caen who lost 3-1 at home to Montpellier.

Midfield machine Rabiu Mohammed played 58 minutes for Evian Thonon Gaillard who squeezed a point out of Sochaux in a 1-1 draw.

In the Ligue 2, speedstar Haminu Dramani was in full time action for Arles Avignon who succumbed to a 2-1 defeat at Laval.

He set up Arles' consolation.

Moussa Narry returned to the Le Mans starting line-up and played 90 minutes when they run away with a point at Reims after a 1-1 draw.

Defender Dennis Appiah manned the AS Monaco defence in their 0-0 draw with Tours.

Heracles Almelo moved to 7th place at the expense of bottom-placed Excelsior Rotterdam. They defeated them 2-0 at their own backyard.

Left-footed Nana Akwasi Asare maintained his place in defence for FC Utrecht who crashed to a 4-1 defeat at home to Heerenveen.

Former Ghana U17 striker Kelvin Bossman sat on the bench for Helmond Sport who scored a 69th minute goal to draw 2-2 with Fortuna Sittard on home grounds.

Kevin-Prince Boateng came off the bench to score a stunning hat-trick for AC Milan in their 4-3 triumph over Lecce.

Sulley Muntari missed out of the Inter Milan first team squad that defeated Chievo Verona 1-0 at the Giuseppe Meazza.

Erik Lamela scored a solitary 8th minute strike to hand AS Roma a 1-0 win over Palermo at the Stadio Olimpico.

Udinese hit the summit of the Serie A table after thumping new boys Novara 3-0.

In the Serie B, Sassuolo dropped to 4th place after drawing 1-1 with Empoli.

Striker Yaw Asante was absent when his Grosseto side beat Brescia 2-0.

Sensational midfielder Edmund Etse Hortor sat out due to injury.

Fiorentina captain Daniel Kofi Agyei set up the second goal as they run past Sassuolo 3-1.

Parma played a 0-0 draw game with Grosseto on home turf.

Defender Bright Addae played 90 minutes but Godfred Adolf was forced to sit out because of injury.

Real Sociedad are still without a win in four games. They drew 0-0 with Getafe at the Estadio Municipal de Anoeta.

In-form Levante cruised to a 2-0 victory over Villarreal at the El Madrigal.

Ghana youth winger Wakaso Mubarak was not in the Villarreal first team.

AIK Stockholm earned a Europa Cup spot on the last day of the Swedish top flight league after playing a 1-1 draw with champions Helsingborg.

Gefle IK ended the season with a 1-1 draw at Djurgarden.

Norrkopping were just lucky to escape relegation after losing 3-0 at Goteborg. Swedish-born Ghanaian James Frempong was introduced on the 30th minute.

Stromsgodset condemned giants Rosenborg BK to a 3-1 defeat at the Marienlyst Stadion in Drammen.

Westerlo dropped to the relegation zone after slipping to a 2-1 home loss to Anderlecht.

In the Ukrainian Premier League, FC Dnipro moved to fifth on the table after beating Metalurh Donetsk 1-0.

Black Stars pair Samuel Inkoom and Derek Boateng both started the match for Dnipro but Boateng was replaced after 57 minutes.

Winger Abeiku Quansah reovered from injury to sit on the bench for Arsenal Kiev who lost 1-0 at Volyn.

Dynamo Kiev demolished FC Zorya 6-1 to take a commanding lead at the top of the table.

Former Heart of Lions captain Daniel Yeboah played 32 minutes for Haras El Hadood who confirmed their superiority over Wadi Degla with a 2-0 win.

Eric Bekoe did not play in Petrojet's 3-2 triumph over Misr Lel Makasa.

Former Kotoko striker Kwabena Yaro was introduced on the 65th minute for El Entag Harby who shared the spoils with Al Masry in a 1-1 draw.

Striker Samuel Ocran scored on the 49th minute to earn a draw a point for El Gounah at giants Al Ahly.

Christian Atsu set up the second goal for Rio Ave in their 2-0 win over Uniao de Leiria. He was replaced on the 89th minute.

FC Sion shocked Servette FC 2-0 at their own backyard. Winger Ishmael Yartey was booked on the 46th minute for Servette.

Hapoel Petah Tikva suffered yet another defeat after going down 1-0 at home to Hapoel Haifa.

In the Major Soccer League, Khalif Alhassan played 80 minutes for Portland Timbers who squeezed a point out of Real Salt Lake.

Chicago Fire laboured to a 3-2 win over Columbus Crew at the Toyota Park.

Ghanaian duo Dominic Oduro and Patrick Nyarko were both in action for Chicago Fire.