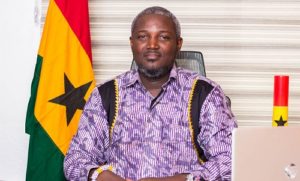 He replaces former Deputy Minister of Sports, Pius Enam Hadzide, who has been moved to the Ministry of Information as a deputy minister.

Even though the press release from the Jubilee House does not state why Hadzide was taken away from the Sports Ministry, however reports indicate that there was a break down in the working relation between himself the pair.

According to media reports, Isaac Asiamah recommended the suspension of Pius Hadzide after the Commonwealth Games visa scandal.

Hadzide was suspended by the President before investigations into the saga began but he was reinstated in July.

The relationship never recovered and so the latest reshuffle may be seen as one that potentially suits both parties.

Perry Okudzeto’s entry into the Sports Ministry will throw him into any potential discussion or event that has to do with the resumption of all football activities in Ghana following a freeze as a consequence of the Anas Aremeyaw Anas Documentary.