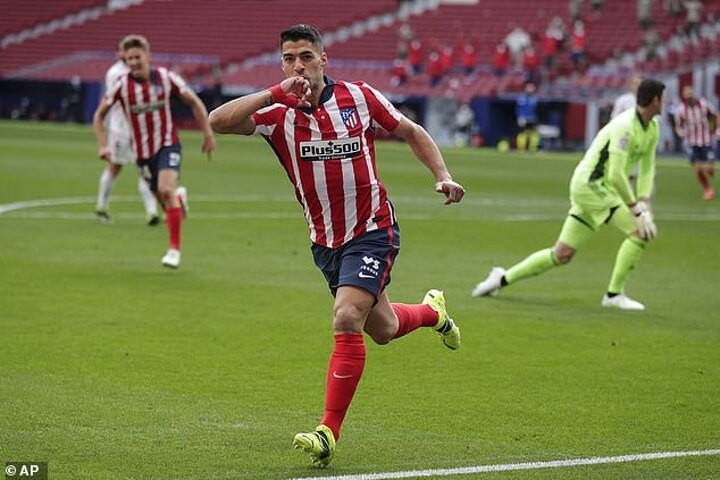 Luis Suarez goes back to the Camp Nou for the first time this weekend since Barcelona forced him out last year and he does so on the day the Spanish title race may well be decided.

Suarez scored 195 goals in 283 games for Barça, becoming the club’s all-time third highest scorer, but at the end of last season they decided he was too old, too slow, too expensive, and too close to Lionel Messi.

New coach Ronald Koeman called him to tell him he was not wanted. They didn’t even mind him joining Atletico Madrid, maybe not anticipating Diego Simeone’s side would be title rivals nine months later.

Atletico arrive in Barcelona on top of the table and it’s Suarez’s 19 goals that have helped put them there.

There has been talk of Barcelona paying tribute to him before kick-off and the club tweeted on Friday that he was 'once a team-mate, now a rival, but always a friend' but Suarez is unlikely to let those sentiments soften him up.

He’s not one to forget and while the president who oversaw his unceremonious departure, Josep Bartomeu, is no longer at the club, there were sizable portions of both local media and supporters who backed the idea of ditching him and it’s them he’ll be thinking about when he crosses the white line.

The magnitude of the fixture in which he makes his return cannot be underestimated. If Suarez inspires an away win then Atletico will be on course to win the league with three games left.

If Suarez's old pal Messi leads Barcelona to victory then Barcelona will be top on Saturday night and three games from the title provided they win their remaining fixtures and Real Madrid don't.

And if it’s a draw it’s advantage Real Madrid: it will be in Zinedine Zidane’s team’s hands – if they win all their games they will be champions.

Suarez will be up against a man he has tangled with a thousand times on the training ground, Gerard Pique. And he will also face international team-mate Ronald Araujo with both those two likely to start in a back three for Barcelona.

As much as this game matters to Suarez in many ways it’s not likely to be a contest that suits his strengths. Atletico are likely to set up to defend in numbers and try to hit Barcelona on the counter attack.

That brought dividends last November when Yannick Carrasco raced away to score despite being charged down by Marc Andre ter Stegen who had sprinted out of his goal in a failed attempt at stopping the Belgian.

Atletico won that game 1-0 with Suarez out after a coronavirus positive.

Carrasco and Marcos Llorente will be the greatest weapons in Atletico’s armoury as they try to hurt Barcelona on the break the way that Granada did in the Blaugrana's last home game.

Suarez will spend plenty of the game a long way from the Barca penalty area as Atletico invite Koeman’s side into their half so they can spring out and run in behind Pique, Araujo and Clement Lenglet, who is likely to be the third centre-back.

If the game is special for Suarez then it will also be for Antoine Griezmann. Like the Uruguayan, he will be up against former team-mates.

Last season in this fixture then-Barcelona coach Quique Setien brought Griezmann on for the last minute of the 2-2 draw. That humiliation is long behind him now and in 2021 he can boast an extraordinary record of 14 goals and 10 assists.

If Atletico win it will be the first league victory at the Camp Nou for Simeone. Asked about his dismal record there on Friday he said: ‘Always in life there is a first time for everything.’

Part two of the battle for the title will take place on Sunday with second-placed Real Madrid against fourth-placed Sevilla. And the focus will be on the managers at the Alfredo di Stefano just as it will at the Camp Nou.

Under-fire Zidane must choose if he sticks with Eden Hazard and Sergio Ramos after he drafted them in for the Champions League semi-final second leg against Chelsea.

Hazard will be out to make up for his disappointing showing in London and his post-game joke with Kurt Zouma.

Ramos, who did not train with team-mates on Friday, still needs to convince the club they should make him a better offer so he doesn’t have to leave this summer. Zidane could look to make the most of both players’ extra-motivation if they are fit to start.

Last but not least on to the main stage of the season’s biggest weekend will be Julen Lopetegui.

Dumped by Real Madrid after just two months in the job in 2018 he could kill off their title dream on Sunday and for the optimists among their supporters put them back in with a chance of gate-crashing the title race once more.

Sevilla are at full-strength and not the ideal rival for a tired Madrid still getting over their Chelsea defeat.

It could be a weekend of sporting revenge. Suarez and Lopetegui will hope so. Whoever it is grabbing the headlines, it looks like being 180 minutes of football that decides La Liga.

At the very least Europe's tightest race will look a little clearer by 10 o'clock on Sunday night.