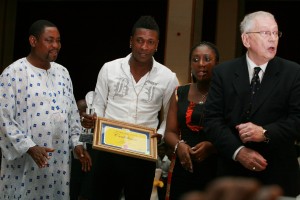 Plans are far advanced to have an annual awards ceremony to acknowledge the performance of Ghana players both locally and abroad.

The awards ceremony which will be under the auspices of the Professional Footballers Association (Pfag) will also celebrate past heroes who have won honours for the nation at all football levels.

"We are working towards having the PFA awards for Ghana players by next year," General Secretary of the welfare body Tony Baffoe exclusively revealed to GHANAsoccernet.com.

"This is where we will be having players voting and awarding their fellow players like its done in Europe and also an opportunity to recognize the achievements and sacrifices made by our old stars."

Though there are several awards event to honour footballers in Ghana, this will be the first of its kind where the jury lies with the footballers themselves.

England readily comes to mind with respect to organising an award voted and presented for professional players.