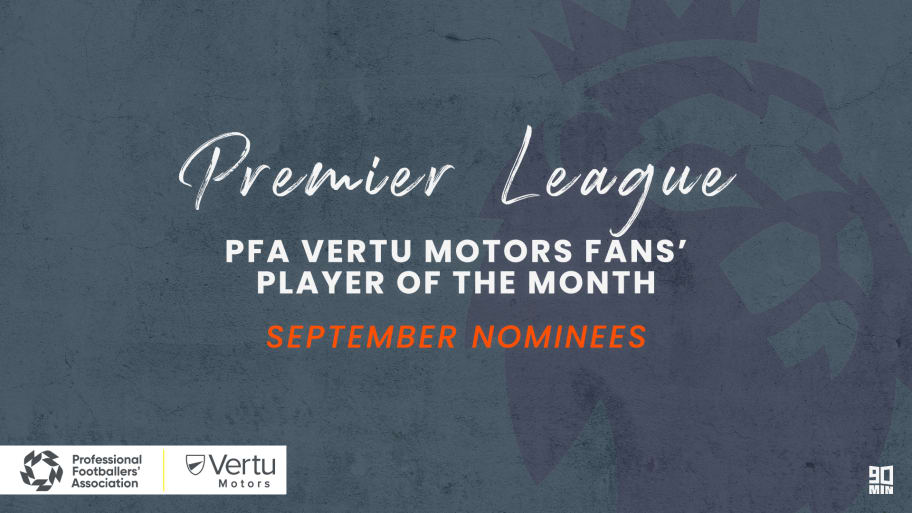 90min is the home of the PFA Vertu Motors Fans’ Player of the Month Award for the 2022/23 season.

Each month, you can vote for your favourite players across five divisions of English football, for the chance to win incredible prizes, including the opportunity to present the award to the winning player.

Your Premier League nominees for September are...

Gabriel Jesus has continued going from strength to strength at Arsenal since his summer move from Manchester City.

While the Gunners were beaten by Manchester United at the beginning of the month, he impressed onlookers with his all-round performance, before closing September with a goal against Brentford.

Everton have managed to stop shipping goals at an alarming rate, and a big part of that is down to the arrival of Conor Coady, who helped the Toffees to two clean sheets in September.

The centre-back was inches away from scoring a Merseyside derby winner against Liverpool too, but had just strayed offside.

Erling Haaland continued his fine start to life at Manchester City with an additional two goals in September, taking his Premier League tally to 11 for the season.

August's award winner has somehow already bettered that tally in one match in October. Incredible.

Both of Manchester United's Premier League games in September came in the first four days of the month, and it was quite the week for Marcus Rashford.

After grabbing a match-winning assist against Leicester, he teed up Antony and scored a brace in their seismic win over Arsenal.

Tottenham won both of their Premier League matches in September, and Harry Kane played a starring role.

He scored their second in a 2-1 win against Fulham before grabbing an early equaliser and late assist in a 6-2 thrashing of Leicester.

Haaland's arrival has been the big story at Manchester City so far this season, but Kevin De Bruyne has also been quietly going about his business too - he grabbed three assists in just two matches in September and stands alone as the Premier League leader in that stat.

You can place your vote here!

NO PURCHASE NECESSARY. Enter Competition between 10/5/21 at 6:00 PM BST and 6/11/23 at 6:59 PM BST; conducted as 18 separate monthly competitions & 2 separate Grand Prize competitions. Open to legal residents of the United Kingdom (excluding Northern Ireland), who are 16+ at time of entry. Limit 1 entry per person per period.

See Official Rules for full details on how to enter, eligibility requirements, entry periods, odds of winning, prize descriptions and limitations. Void in Northern Ireland and where prohibited.

This article was originally published on 90min as PFA Vertu Motors Premier League Fans' Player of the Month - September nominees.