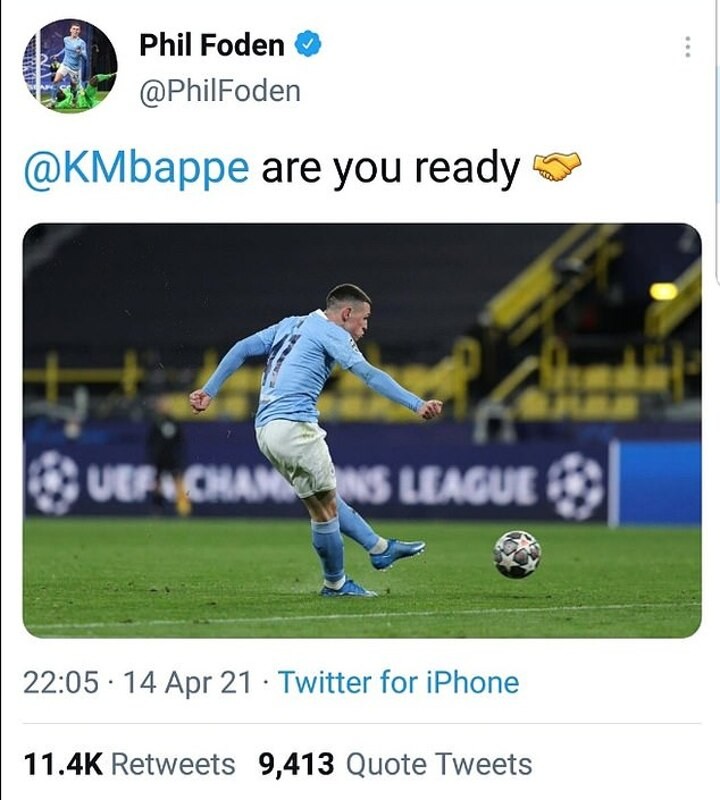 Shortly after Manchester City had booked their place in the semi-finals, a picture of Foden began circulating with the words ‘@KMbappe are you ready?’

But the 20-year-old City star and his representatives were not happy with the tone of the tweet, as it looked almost as if he was throwing down the gauntlet to Paris Saint-Germain superstar Kylian Mbappe.

He quickly asked for it to be taken down. The post had however already gained plenty of online traction and received a series of replies from online Twitter users, who questioned why Foden had appeared to immediately reach out to Mbappe.

Foden’s representatives will be discussing their next steps and could well look to end their relationship with the company.

City’s win has set up a mouth-watering semi-final against PSG and their 22-year-old World Cup winner Mbappe, who is likely to pose the greatest danger to City’s chances of reaching their first final.

PSG put on a dazzling show of their own to reach the last four of the competition, by banishing the ghosts of 12 months ago and eliminating holders Bayern Munich.

Bayern broke PSG hearts in last season's final, though the Parisians got their revenge this week by progressing on away goals following a 3-3 aggregate scoreline.

Mbappe dazzled in the first leg, scoring a brace as PSG took a slender 3-2 lead from Bavaria back to the French capital.

Bayern's 1-0 victory in Paris on Tuesday evening was not enough, as Mbappe and Co. now take a step closer to booking their place in the final once again.

In the other half of the draw Thomas Tuchel's Chelsea will go up against Real Madrid over two legs, in a battle to secure a ticket to Istanbul.