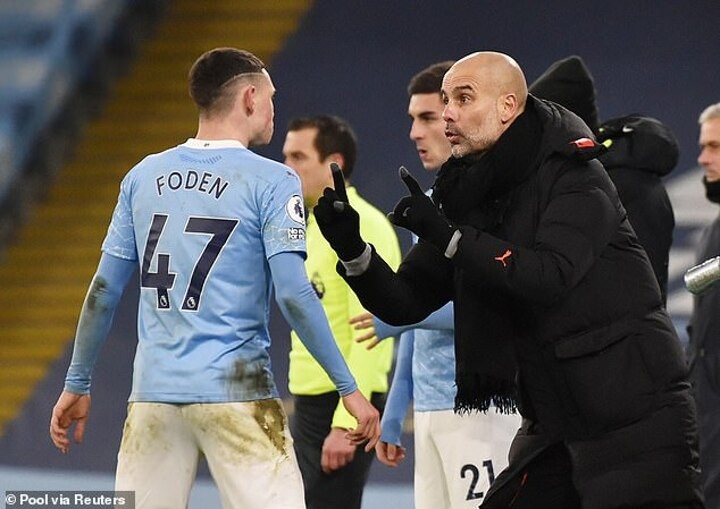 Pep Guardiola believes Manchester City starlet Phil Foden needs to make some changes to his game if he is to play a more central role and become an 'exceptional' player.

The 20-year-old has really begun to deliver on his potential this season, contributing 11 goals and six assists in all competitions, and is now widely regarded as one of the best young players in the world.

However, he still does not yet command an automatic starting birth and is usually used out wide.

And Guardiola says that is because his play can be a little one-dimensional and overzealous at times.

'He is a top, top player but still he is playing football in one rhythm and he has to combine different rhythms to be an exceptional player,' Guardiola told BT Sport.

'He makes all the actions in one explosion. When you play in the middle you have to be more calm. Maybe it's because he's 20, he has incredible energy to do everything.

'It doesn't mean he's going to change now. That comes with time and seasons... Every player at 28 is better than at 20 but he has the desire, he loves the club and I am pretty sure he will. If there's one player that can do it he is the one.'

'It doesn't matter if you are 25 or 20, if you have the skills and the talent you can play,' Guardiola said. 'I think he was patient enough to have his moment and he has to continue to be patient.'

City's 4-1 win over Wolves on Tuesday, in which Foden did not feature, leaves them 14 points clear at the top of the Premier League.