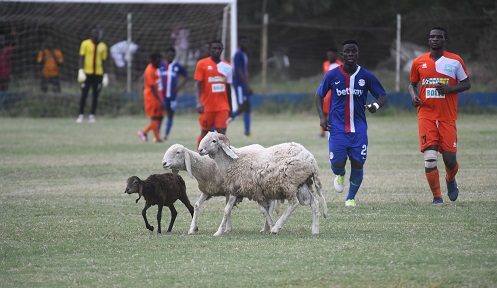 The Normalisation Committee Special Cup match between Liberty Professionals and Ebusua Dwarfs at the Dansoman Carl Reindorf Park on Wednesday, April 3, 2019, was momentarily halted by a heard of sheep.

Their presence on the pitch compelled referee Solomon Modey to halt play for about five minutes to allow for the sheep to be shepherded out of the pitch.

Although in Ghana it is not uncommon to see stray animals all over, it is considered strange when such animals find their way unto the stadium.

The situation drew mixed feelings among spectators. While some laughed over it, others attributed it to superstition.

However, the circumstance under which the three sheep invaded the pitch to graze while play was ongoing still remains mystery, with many fans wondering how they were able to outwit security at the gate and enter the park in the first place in spite of the inner perimeter fence wall.

A steward at the park was seen in a comical pursuit of the sheep who were running in circles before finally making their way out of the pitch with the help of some players.

This happened after the 80th minute when the Dansoman-based side were four goals up. Some fans were heard saying the three sheep represented three goals that Liberty Professionals were supposed to have scored in the match but the home side ended up scoring four unanswered goals. Liberty scored through an own goal by Dwarfs defender Kwadwo Addai, a brace from forward Emmanuel Addo and Benjamin Eshun.