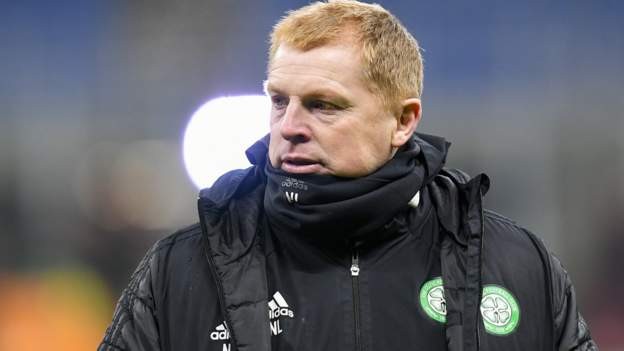 Celtic played at a "very high standard" in the 4-2 defeat by AC Milan but let themselves down by "not being physical enough", says manager Neil Lennon.

The Scottish champions were 2-0 up inside 15 minutes but succumbed to a fourth defeat in five Europa League group games as Milan roared back.

They have won just twice in 11 matches in all competitions, conceding 26 goals in that run.

"I was delighted with a lot of aspects of our play," Lennon said.

"Even at 3-2, I thought we were always in the game, and we looked a threat all night. But we've let ourselves down in not being physical enough in the tackle at times.

"It's not as if we were cut open, we have plenty of players back to deal with it and we don't, so that's the way the game went. That's where the tie was lost really."

The game had no practical significance for Celtic, who could not progress to the knockout stages after back-to-back defeats by Sparta Prague.

But with Lennon under increasing pressure after the League Cup exit to Ross County, he needed his side to show a marked improvement against the Serie A leaders, which he felt they did.

"The scoreline doesn't do us justice," the Northern Irishman added. "We're talking about playing AC Milan at the San Siro, we're sitting here disappointed that we haven't got something out of the game.

"Other people may say it's another defeat, another four goals, I get that, I understand that.

"But the quality of opposition we're playing tonight is top class, and the performance of the team and the players as individuals was a very, very high standard."