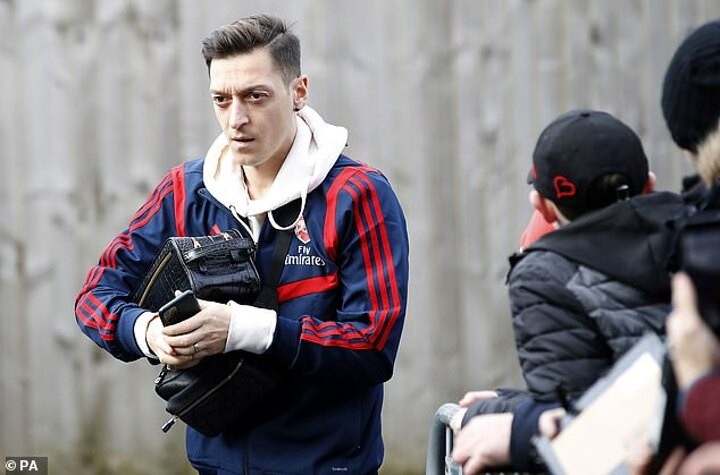 Mesut Ozil in red and his infamous £350,000-per-week deal are finished, sparking a hostile send-off from Piers Mogan who branded the star 'lazy' and 'manipulative'.

Relations between Gooners and their top-earning talent have been strained for years, with Ozil yet to make a single appearance in any competition this season.

The former Real Madrid midfielder is now set to join Fenerbahce, ending an era at the Emirates. Ozil has spent seven-and-a-half years in north London but has barely contributed for the last three.

'Loved @MesutOzil1088 when he first came to Arsenal,' Morgan wrote on Twitter.

'World class player with a sublime natural talent. Now I can’t wait to see the back of the lazy manipulative £350,000-a-week wastrel.

'You could have been a club legend, Mesut - but you just couldn’t be bothered. Bye.'

Once the Premier League's assist king, Ozil's has been a stunning decline since being rated as one of the world's top technical players.

Despite failing to wheel-out an ounce of that talent during a disastrous period of Europa League misery for Arsenal, Ozil has held onto a loyal core of fans and remained a heated topic of debate.

'Thanks for the good times Ozil. You'll remain a legend at Arsenal,' @mndukwe wrote as the news broke.

'It is so unfortunate that it had to end this way but this is the right move for both, the club and Mesut Ozil. Thank you for everything, Mesut. You are a club legend,' @m_anasmalik added.