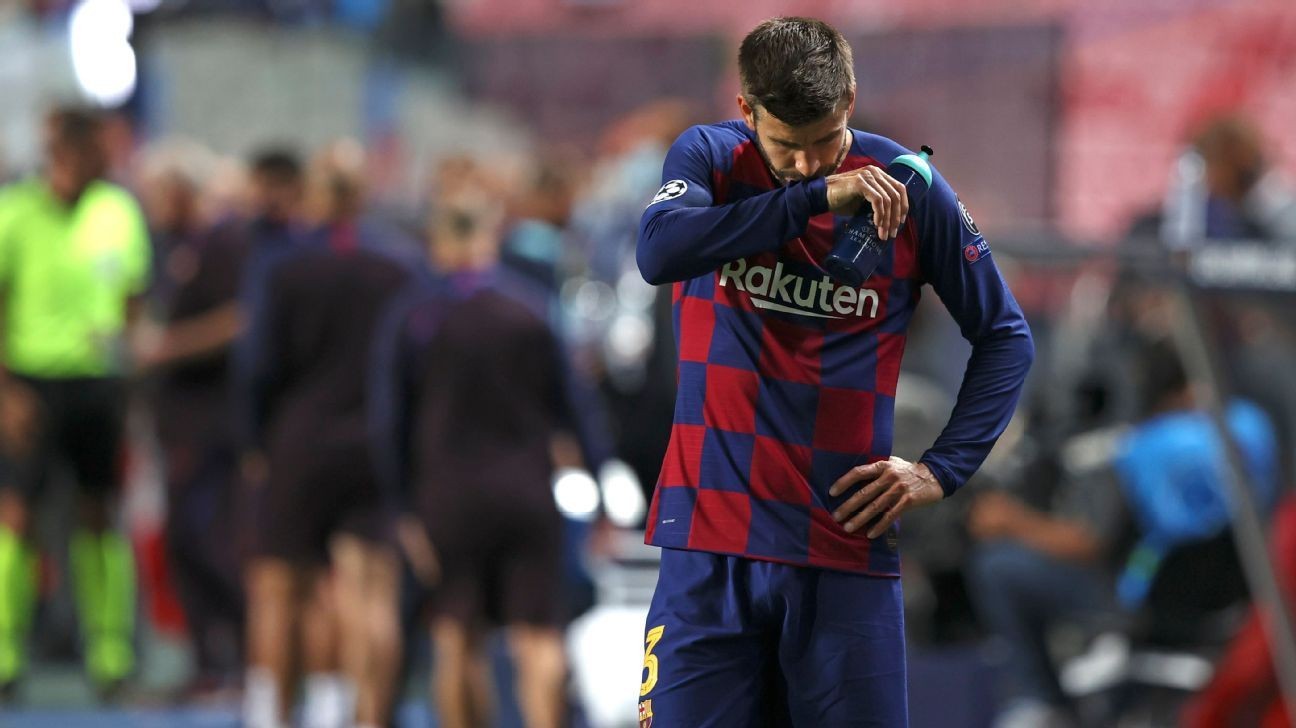 The Champions League was Barca's last chance of silverware this season after they missed out on La Liga to Real Madrid last month, but defeat means a first trophy-less season at Camp Nou since since 2007-08.

- Ratings: Barca woeful all over the field in defeat
- Stream ESPN FC Daily on ESPN+ (U.S. only)
- Champions and Europa League fixture schedules

It was the first time Barca have been beaten by six goals since 1951 and comes on the back of three and four goal losses at the hands of Roma and Liverpool in each of the last two seasons.

"It was a horrible game, terrible, disgrace is the word," Pique told Movistar. "You cannot compete like that in Europe. And it's not the first or second time it's happened to us.

"It's tough and I hope it serves for something. We all have to reflect. The club needs changes. I am not speaking about the coach or players or singling anyone out. Structurally the club needs all type of changes, because this isn't the first time."

An ageing spine has been blamed for Barca's decline -- the average age of the starting lineup against Bayern was over 29 -- and Pique, now 33, even said he would walk away from the club if that's what is needed to turn things around.

"No one is indispensable," he added. "I'm not. I'll go if new blood has to come in and change this dynamic because we've hit rock bottom.

"We all have to reflect internally and decide what's best for the club, which is the most important thing. This was unacceptable for a club like Barcelona."

Asked if he agreed with Pique's comments, Setien told a news conference: "I've only been here for six months. If he has said what he has said then there will be something in that. Decisions will have to be made for the best for the future of the club."

Sources told ESPN before the Bayern game that Barca were already scouring the market for a new manager, but Setien says it is not the moment to discuss his future.

"It is too soon to say if I am going to continue or not," the coach added. "It does not depend on me."

However, while Setien is likely to pay the price for a trophy-less campaign, Pique's comments have also been taken as a criticism of president Josep Maria Bartomeu.

Amid the calls for an overhaul of the squad and a change of coach, there is also a clamour for Bartomeu to bring the presidential elections, which are due to be held next summer, forward by a year.

Bartomeu, who cannot stand in the next elections, confirmed a number of decisions regarding changes had already been made prior to the Bayern game and suggested more drastic measures could be taken in the coming days.

"We have already made some decisions but I am not going to say what they are now," the president told reporters. "Now is not the time. It is time to reflect.

"This is really tough. We're sorry to all our members and supporters because this was not the team or the club we represent. It was a disaster."

There were flashbacks of defeats against Roma and Liverpool as Bayern raced into a 4-1 lead inside a blistering opening half an hour in Portugal, with two goals from Thomas Muller and efforts from Ivan Perisic and Serge Gnabry. A David Alaba own goal had briefly drawn Barca level.

Luis Suarez briefly brought Barca back into the game after the break but a goal from Joshua Kimmich, set up by the outstanding Alphonso Davies, killed off any hopes of an unlikely comeback.

Robert Lewandowski added the fifth before a late brace from substitute Philippe Coutinho, Barca's record signing who is on loan at Bayern, completed the rout and sealed one of the worst nights in the Catalan club's history.