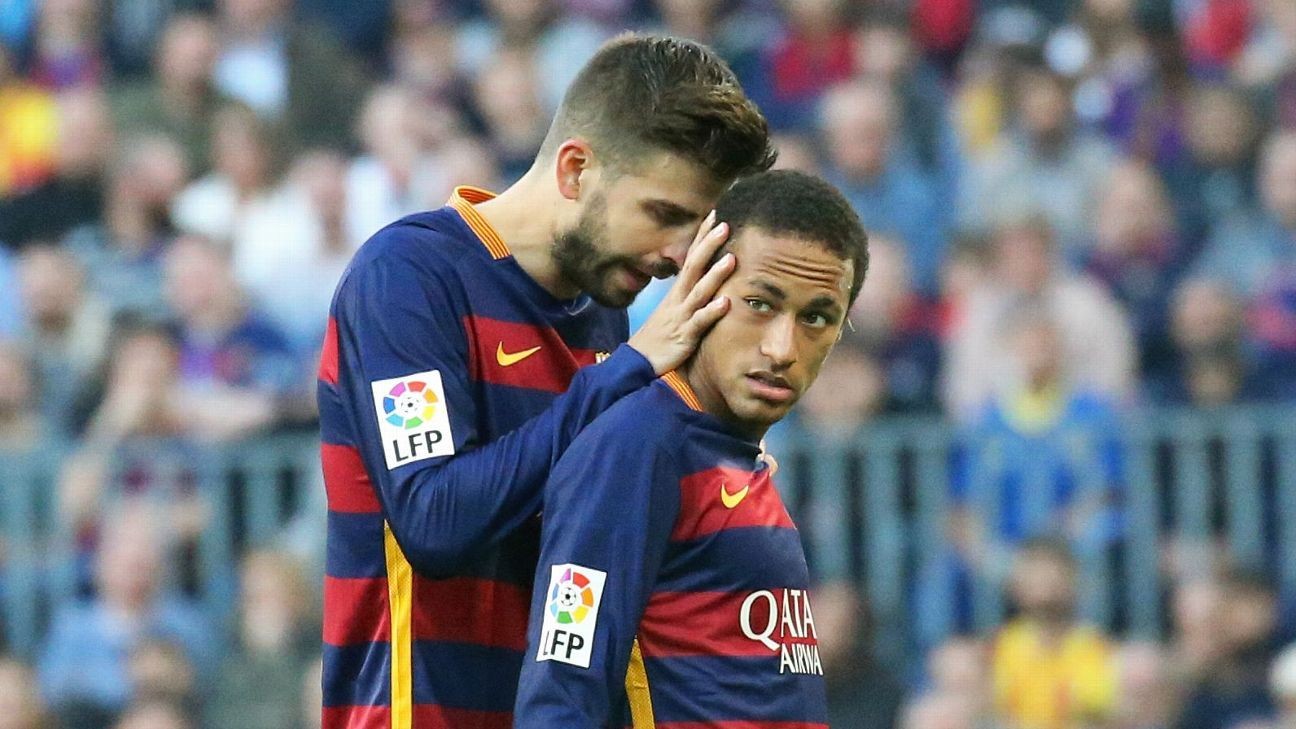 With PSG and Neymar still at odds, Alejandro Moreno says the Ligue 1 club needs to come down on the price to land the Brazilian.

Julien Laurens dismisses the possibility of Neymar joining Real Madrid on loan, even if Florentino Perez wants the move to happen.

With players like Paul Pogba and Neymar trying to force their way out of their clubs, Frank Leboeuf explains why this behavior is unfair to the teams.

MIAMI -- Gerard Pique says Neymar must speak out if he wants to push through his "complicated" return to Barcelona from Paris Saint-Germain this summer.

Sources have told ESPN FC that Barca have looked into a deal for Neymar, while PSG sporting director Leonardo has confirmed the club would sell the Brazilian forward for the right price.

Neymar, 27, left Barca for PSG in a world record €222 million transfer two years ago and the way he forced through his exit angered some people at the Catalan club.

However, Pique says he would be delighted to welcome him back to Camp Nou but added the caveat that it will not be easy to come up with a formula to satisfy the French champions.

"I think Neymar's a great player that knows the dressing room, the city and the club," the defender said in a news conference ahead of Wednesday's game against Napoli at the Hard Rock Stadium in Miami.

"There are people that weren't happy with how he left, but there are a lot of people who were very happy with his performances. It's a complicated operation. He's a PSG player and the squad that we have is good enough to win every trophy.

"If the opportunity comes up, you know the relationship I have with him. I would be delighted if he came back, but he's a PSG player. A personal opinion doesn't change anything.

"It has to be Neymar who speaks out. Of course we speak with him, but it's not right to reveal private conversations. If he wants to speak out or give his opinion, he has to come out and say it. He's a crack on and off the pitch and we're waiting to see what happens. I can't say anything else."

Barca had to take out a loan to finance the €120m signing of Antoine Griezmann in July so are unlikely to be able to meet PSG's asking price. Therefore, they would either have to offer players in exchange or sell before they buy. A loan with an obligatory option to buy later, and therefore defer the payment, has also been mooted.

Philippe Coutinho could be key. Barca are keen to sell their club-record signing and sources have told ESPN FC they're looking to move him to a Premier League club before the transfer window shuts in England on Thursday. Tottenham Hotspur have emerged as an option.

"I don't know what will happen with Coutinho," Pique added. "Obviously I want him to stay but at the end of the day it's what he wants and I want him to be happy. Let's see.

"Until the last day of the transfer market, we will not know if he stays or not. But it's not my decision, it's the club's and Philippe's."

If Neymar did come back to the club, he would become the fifth signing of a busy summer following a disappointing end to last season. Barca were heavily criticised for their Champions League loss to Liverpool and the Copa del Rey final defeat to Valencia.

However, they did still win the league for the second year in a row, this time by a margin of 11 points, and Pique echoed comments made by Lionel Messi earlier in the week calling for more value to be given to their domination of La Liga.

"To [win eight of 11 leagues] in Spain, which has one of the strongest leagues, deserves a lot of credit," he said. "It's not valued because we win it by 15 or 20 points. Instead of adding value because we've been superior to the rest, it's taken away.

"We could throw the league and the Copa del Rey and focus on the Champions League, but we don't like playing Russian Roulette. Sometimes, everything comes off, other times it doesn't."