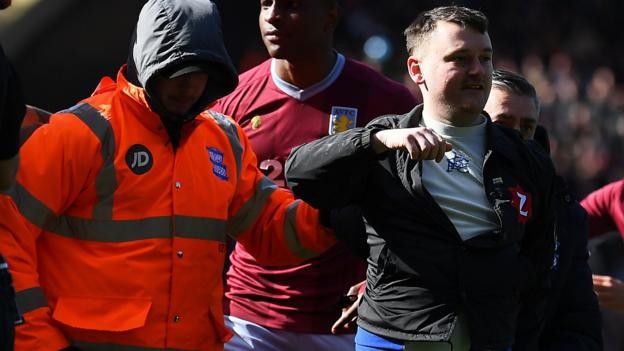 The warning comes from the Football Association, Premier League and English Football League after on-field attacks on Jack Grealish and Chris Smalling.

A man was jailed for 14 weeks for assaulting Aston Villa captain Grealish during the first half of Sunday's Championship match at Birmingham City.

Paul Mitchell, 27, from Worcestershire, has been banned for life by the club.

Another man has been charged with assaulting Manchester United defender Smalling in the second half of their Premier League defeat by Arsenal on the same afternoon.

Gary Cooper, 30, from Chertsey is due to appear before magistrates on 26 March.

In a joint statement, the game's three governing bodies strongly condemned the "reprehensible actions of supporters who entered the field of play".

The statement added: "English football has worked hard over many years to ensure that our grounds are safe places. It's essential all players feel safe and supported every time they go on the pitch.

"There is absolutely no place for any type of behaviour that puts this at risk.

"We also acknowledge that the overwhelming majority of fans attend football matches to support their team in a positive manner and we will continue to work with those fans, clubs and stakeholders to generate the best possible atmosphere at games.

"Anyone who attends a match to threaten this principle, either from the stands or by entering the field of play, will face the strongest possible sanctions."

The attacks on Grealish and Smalling followed a number of incidents in Scotland, including one involving Rangers captain James Tavernier during his club's match against Hibernian earlier this month.