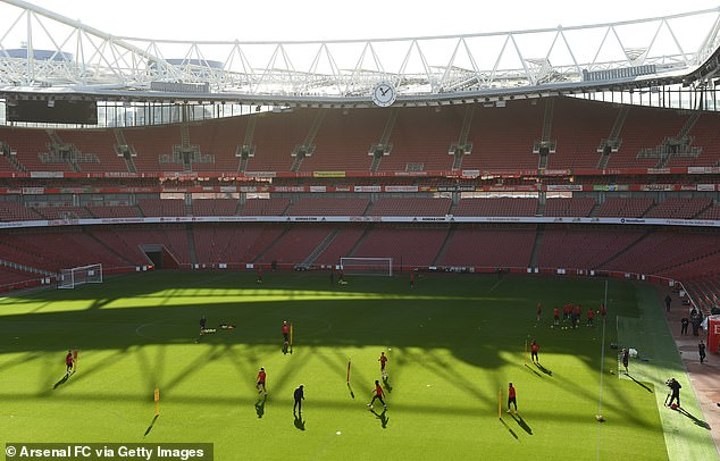 Premier League clubs are considering holding friendly matches and training sessions at their stadiums for behind-closed-doors practice ahead of the top-flight’s return.

Several managers and their coaching teams have discussed using home grounds in their Project Restart preparations to help familiarise players with their new surroundings for the remainder of the season.

The Premier League will resume from June 17 though all games will be without supporters leaving players needing to adjust to club games in empty stadiums.

Many top-flight bosses are hoping to arrange at least one warm-up fixture before the competitive action resumes with their players having not played since early March.

Staging them at training grounds is an option but using their stadiums will add further value to the games for clubs and managers.

If matches cannot be arranged holding training sessions will at least give managers and players some opportunity to gain experience of performing in empty grounds to take into the end of the season.

Holding practice matches at their stadiums would give clubs the chance to give their match travel plans a test run.

In Germany clubs have had to travel on multiple coaches so players can be far enough away from each other to observe social distancing guidelines and similar orders may be introduced here.

Stadium friendlies, if they can be arranged, will also be an early test of supporters and whether they comply with instructions to stay away amid concerns about them congregating outside grounds while they are locked out.

Premier League chief executive Richard Masters hopes supporters will be able to return to grounds at some point in 2020/21.

‘There is optimism at the Premier League and at clubs that we will see fans back in the stadiums next season and it may happen on a phased basis,’ he said.

Masters also confirmed it is ‘absolutely our intention to complete the season with VAR in place.’