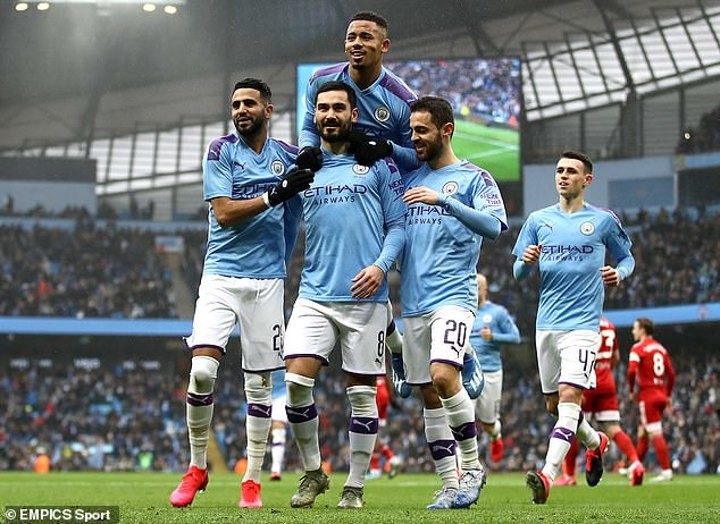 Fans could be asked to vote to select personalised goal celebration music for individual players when the Premier League resumes.

The proposals are being discussed by clubs to promote greater supporter engagement around behind-closed-doors matches.

The prospect of fan polls has led some clubs to express concerns that inappropriate or embarrassing tracks could be chosen, particularly if the online process was hijacked by rival supporters.

An alternative proposal is for the players to pick their own celebration music.

The Premier League’s Enhancing the Broadcast Product Advisory Group are also considering using images of fans, banners and pictures in empty stadiums in an attempt to improve the televisual spectacle.

HUMMEL SIDE WITH UNDERDOGS

Everton’s new kit sponsors Hummel have scored an own goal by declaring an affinity with clubs who do not win.

On the sponsorship section of their website, the Danish sportswear company say that their priority in seeking commercial partnerships is not sporting success, stating clearly that ‘we look for underdogs, those who rarely win’.

This may go some way towards explaining the fact that their British sponsorship portfolio also includes Rangers, Charlton and Oldham.

It was perhaps fitting therefore that Everton’s club record £9million-a-year deal with Hummel started on the 25th anniversary of the last time they won a trophy, the 1995 FA Cup.

Next season’s Europa League could begin before the current competition has been completed under plans being considered by UEFA.

Scheduling the Europa League qualifiers is emerging as a real problem as only 17 of the 48 clubs in the group stages qualify directly from domestic leagues. The remaining 31 go through a qualification process that in some cases consists of six matches.

Under the latest proposals from UEFA’s emergency working group, the qualifiers are due to start in the middle of August, whereas the final of the 2019-20 competition is not scheduled until the end of that month.

Manchester United and Wolves are still in this season’s competition, which reached the last 16 stage before the shutdown. Both sides may need to qualify for the next instalment, depending on where they finish in the Premier League.

UEFA’s final decision on scheduling the Europa League and Champions League will be made at their Executive Committee meeting on June 17.

Championship clubs have effectively been given a veto over whether the lower divisions can curtail their seasons due to a quirk of the EFL’s constitution.

In order to be passed, all regulation changes require the support of at least 13 Championship clubs and a 51 per cent majority from all 71 members of the EFL. So a positive vote from Leagues One and Two would not be sufficient to sanction the proposed move to points-per-game if enough second-tier clubs object.

If the proposal is passed then the individual divisions will vote again on whether to curtail, with a ballot already planned for League One.

Amazon Prime are lobbying the Premier League for the right to broadcast some of the 45 additional matches that will be up for grabs when the season resumes by pointing out that they have already screened extra games in Germany.

The internet streaming service showed Friday night's Berlin derby between Hertha and Union and will also stream Schalke v Augsburg on Sunday — both matches that were not included in their original Bundesliga rights package.

As Premier League rights-holders, Amazon will argue for a share of the extra matches — most of which will be given to Sky Sports and BT Sport — which are in addition to the 47 matches those broadcasters were already due to televise.