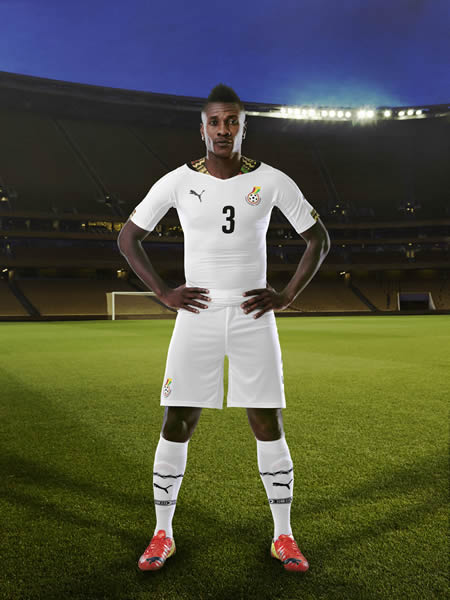 James Kwesi Appiah assessed the strength of his side World Cup-bound player with the international friendly against Montenegro in Podgorica.

AC Milan star Michael Essien produced the most outstanding performance of the night as he held the midfield with experience and precision.

GHANAsoccernet.com rates the performances of the Black Stars in Podgorica.

The Stromsgodset shot-stopper had to be at his best on two occasions in the first-half to deny the host from going 2-0 up.

Kwarasey expressed feline reflexes to keep Ghana's hopes of snatching a point from the game alive but stood no chance of preventing Boskovic from scoring the only goal of the game from the spot.

Kwesi Appiah deployed the Standard Liege versatile full-back at right-back and he overly impressed in the game.

His tackles were apt and manned his side of the defence well. He occasionally joined the attack.

Not the brightest of evenings for the Vitoria Guimaires defender as his tackle in the 1st minute resulted in the penalty that helped Montenegro to win the game.

He was substituted by Samuel Inkoom in the second half.

A pillar at the back. The Turkish-based defender won most of the tackles he went into and kept the hosts attack at bay.

The Stade Rennes man was playing his first game for the Black Stars since last August and he formed a good partnership with Akaminko in defence.

He came close to scoring twice in either halves but he missed his headers.

The AC Milan star was Ghana's best player for the period he lasted on the pitch. With substantive captain Asamoaj Gyan starting from the bench, the ex-Chelsea star took the armband and proved his quality in the middle winning important tackles and distributing the balls in midfield with a measure of quality technique.

The Rubin Kazan midfielder appears to have experienced a dip in form and failed to impress in the 45 minutes he lasted on the pitch.

There was no telepathy between him and Christian Atsu in the Ghana midfield.

Subbed by Albert Adomah before the commencement of the second department, Badu could not produce one of his inspiring displays in midfield as he appeared underwhelmed.

He failed to impose himself in the game.

The Chelsea loanee was not the dribbler known in Ghana games. He failed to gel and link up well with the rest of the midfield.

He always lacked the final bite in his play.

The 22-year-old failed to find the back of the net on his tenth cap for the Black Stars. And, he formed a poor partnership with Jordan Ayew as he was pairing with him for the first time.

He completed the entire 90 minutes of the game.

Once the midfield failed to create scoring opportunities in the first half, Jordan was inefficient in attack and could not threaten the opposition goal.

He was replaced by Kevin Boateng in the 58th minute.