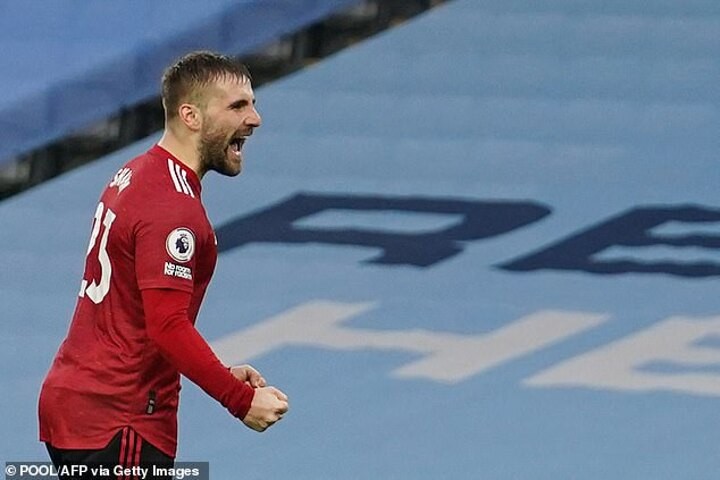 Manchester United won at the Etihad for the third time in the last four seasons to close the gap on Manchester City to 11 points, and hand them their first defeat in 22 games.

Bruno Fernandes gave Ole Gunnar Solskjaer's side the lead from the spot in just the second minute of the game after Gabriel Jesus fouled Anthony Martial in the box, Luke Shaw doubled United's lead shortly after half time.

The win did the Red Devils' hopes of securing a top-four finish a major boost – they're now eight points clear of fifth-placed Everton and unbeaten in their last 22 Premier League away games.

Sportsmail's Jack Gaughan cast his eye over the action and provided the ratings for the players and managers.

Disappointed not to stop Bruno Fernandes’ early penalty. Later made a huge save from Anthony Martial.

Nowhere near the standards set in recent months. Caught out for United’s second goal after half-time.

Strong display initially, turning over the ball across the pitch, but did not enjoy United running at him.

Unusually shaky when faced up one-on-one. United managed to isolate City’s defenders well on the break.

Rarely put a foot wrong at left back and City’s problems did not originate from his side.

Appeared to be one of City’s better players and regularly thwarted counters fairly well. Hit the bar at 1-0.

The Belgian has struggled since returning from injury and did so again. Radar was off but showed glimpses.

Located the correct pockets in the final third but nothing fell for the midfielder as it has done recently.

Was not given an inch by Aaron Wan-Bissaka. Missed a huge chance inside the six-yard box when moved centrally.

Clumsy tackle in the opening moments for the penalty while attempting to make up for conceding possession.

Picked the sort of team that has been blowing others away. Will be frustrated at City rushing in the final third.

Solid handling throughout and never flustered. Smart throw out to Luke Shaw prompted the counter for the second goal.

Loves the challenge against Sterling and smothered the England winger when he cut inside on his right foot.

Not often that City broke beyond the back four and much of that was down to the central defensive pairing.

The captain must have a good game in order to win and keep a clean sheet at the Etihad Stadium. Maguire did just that.

Terrific running from back to front as he slotted in the second goal. Stood up to Mahrez on United’s left.

Similar to McTominay in a defensive sense, although gave away the ball too often in midfield.

Not an explosive afternoon, although did do a good job of keeping hold of possession later in the game.

The Portuguese retained his magnificent penalty record and went against natural instincts to simplify things in midfield.

Could have been utilised more often but gave City so many problems when involved on the break.

Purposeful drive in the first minute gave United an advantage; Ole Gunnar Solskjaer will want more of that in future.

Set United up perfectly to hit City where it would hurt. Stable defensively and included lots of pace.

Allowed the game to flow where possible and called the majority of decisions without the need for VAR’s intervention.