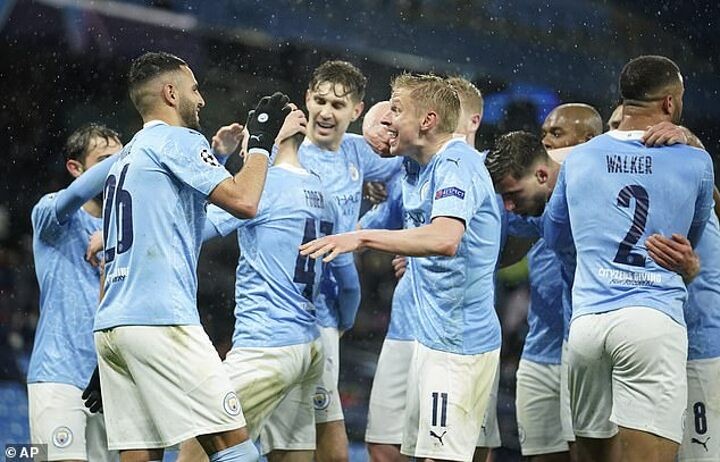 City headed into the game leading 2-1 on aggregate, but it was Riyad Mahrez who provided the two goals at the Etihad to confirm their place in the final.

Here, Sportsmail's Jack Gaughan gives his verdict on how each player performed on Tuesday night.

Wonder pass for the opener. Came and collected several crosses without fuss.

Exemplary recovery runs were a hallmark of his performance. Very solid yet again.

Colossal at the back. In the way of everything. Read the game and PSG’s runs beautifully.

The main organiser of City’s back four and put his body on the line for the cause so often.

Integral as a substitute last week and flawless from the start last night. Key role in the opener.

Two exceptionally calm finishes. Quiet for spells but has enduring quality around the box.

Incredible that he turned 36 yesterday. The master of breaking up play and annoying opponents.

Some lovely touches and intelligently moved into the final third when required. Cool display.

Silk for boots. One 30-yard dance took five PSG markers with him. Top cross for the second.

Seems to enjoy this role and drives on with proper gusto on the break. Always dangerous.

Played two false nines. Drilled his team to contain PSG, absorbing pressure, before hunting in packs and devilishly hitting them on the break.

Not an awful lot to do, although did make one smart stop after half-time from Foden.

Quite isolated at right back as City broke quickly. Held his own to a degree.

Struck the bar as PSG searched for an equaliser. Completed a few crucial blocks.

Could have got out to deal with Mahrez quicker as City opened the scoring early on.

Stood up to Mahrez for the majority. Would have wanted to push his marker back the other way.

Niggly night. Exactly what PSG wanted from him but Herrera appeared a little pre-occupied.

Expected to offer that bit of punch from deep. Could have taken more risks going forward.

Petulant kick out on Fernandinho that led to his sending off. Frustrated by Zinchenko all evening.

Good use of the ball and attempted to find little spaces. PSG’s best player again.

The obvious threat throughout. Found City doubled up on him so often and needed help.

Severely hampered by Mbappe’s injury. Set up to attack yet PSG just could not make their territorial advantage count.