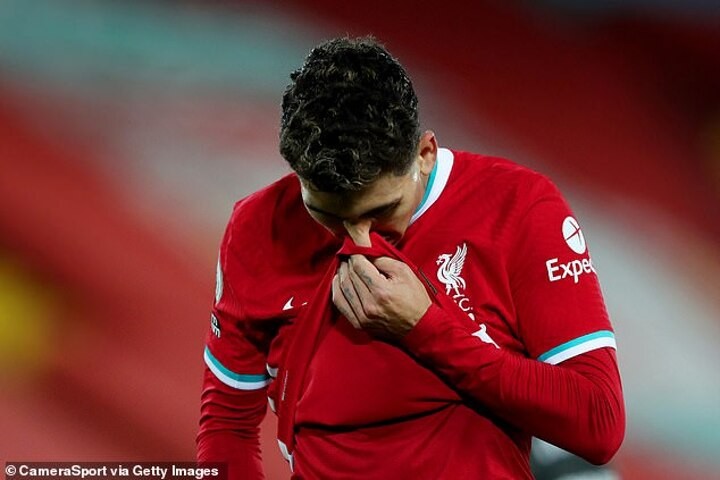 Liverpool and Manchester United played out a drab goalless draw at Anfield on Sunday evening.

Both sides had little spark in attack, with only seven shots on target in total between both sides.

Ole Gunnar Solskjaer's side had the better of the late chances, with two strong saves late on from Reds goalkeeper Alisson, and the point leaves the Red Devils top of the Premier League with Liverpool three points back.

Sportsmail's Chris Wheeler rated the performances of the players from both sides.

TRENT ALEXANDER-ARNOLD 6 – Kept Martial quiet but didn’t get forward as much as he likes.

FABINHO 7 – Calming influence at the back and made an excellent block from Fernandes.

ANDREW ROBERTSON 6.5 – Got in a couple of lovely crosses that deserved a better finish.

XHERDAN SHAQIRI 6 – Did well considering it was his first league start for more than a year.

THIAGO 6.5 – Authoritative start on his home debut and came strong again in second half.

MO SALAH 5.5 – Subdued by Shaw and couldn’t find the target when he had a sight of goal.

ROBERTO FIRMINO 5 – Had the best of Liverpool’s chances but his finishing let him down.

SADIO MANE 5 – Rarely got the better of Wan-Bissaka. Very quiet by his standards.

Manager: Jurgen Klopp 6.5 – Will be happy with the performance from an unfamiliar line-up.

DAVID DE GEA 6.5 – Flying save from Thiago and dealt with everything else comfortably.

AARON WAN-BISSAKA 7 – Came out on top with his duel with Mane and got forward well.

VICTOR LINDELOF 7 – Justified his selection with several fine interceptions in front of goal.

HARRY MAGUIRE 6.5 – Shaky start from him but stood strong when it mattered.

LUKE SHAW 8 – One of his best games. Outstanding in defence and a threat going forward.

SCOTT McTOMINAY 6 – There to break up play and add bite to midfield. Did his job.

BRUNO FERNANDES 4.5 – Probably his worst match for United. Passing game was completely off.

ANTHONY MARTIAL 5 – Passed fit to start but had little effect. First player to be subbed.

Manager: Ole Gunnar Solskjaer 6 – Had a big chance to win at Anfield and will rue not taking it.

Referee: Paul Tierney 6.5 – Liverpool were unhappy he blew early for half-time but otherwise handled it well.