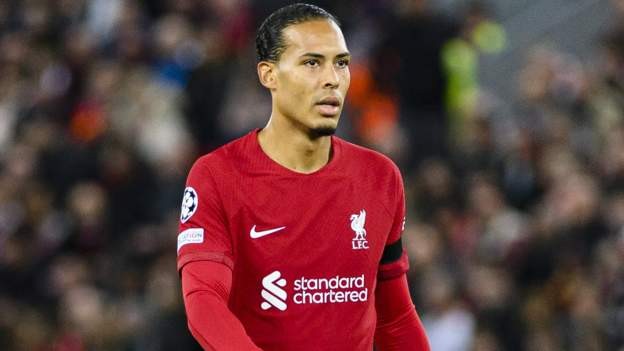 Virgil van Dijk says the well-being of players in the UK is "forgotten" amid criticism of Liverpool team-mate Trent Alexander-Arnold.

There has been an intense focus on the defender's recent performances after an indifferent start to the season.

"Everyone here is very good to praise a player very high up to the sky and let them fall as hard as they can," said Netherlands defender Van Dijk.

"That's what we, as players, have to deal with."

"For him to just carry on working - not only him but other players as well - and deal with it and show a reaction is what we need, all of us.

"To do that I think it's important that we back him and the manager and the club and the fans."

Liverpool have struggled for form generally this season - winning just two of seven Premier League games - but Alexander-Arnold's displays have been of particular focus.

Former Manchester United defender Gary Neville said Alexander-Arnold, 23, has the potential to be one of the world's best right-backs if he worked on his defending.

Liverpool boss Jurgen Klopp responded by labelling Alexander-Arnold "exceptional" and saying he would pick him in any team he managed.

Speaking after Tuesday's Champions League win against Rangers, where he scored a free-kick, Alexander-Arnold said he was just focusing on performing on the pitch.

"No matter what I always try and think positively," he told BT Sport.external-link "People will say things but for me it is about going out there and helping the team win games.

"It's been a slow start to the season for me but I'm looking forward to the rest of the season."

Van Dijk believes the debate surrounding Alexander-Arnold is typical of what modern day players have to put up with, unlike those from previous eras.

"If the players from 10, 20 years ago were under the microscope we are at the moment there would also be a lot of players struggling," he said.

"It will always come to you and it's not easy to just completely shut it out and keep your head down - or you need to live under a rock and just turn up for training and then go back home and go to the game and go back home.

"We have to deal with it but it is not easy, let's put it that way."