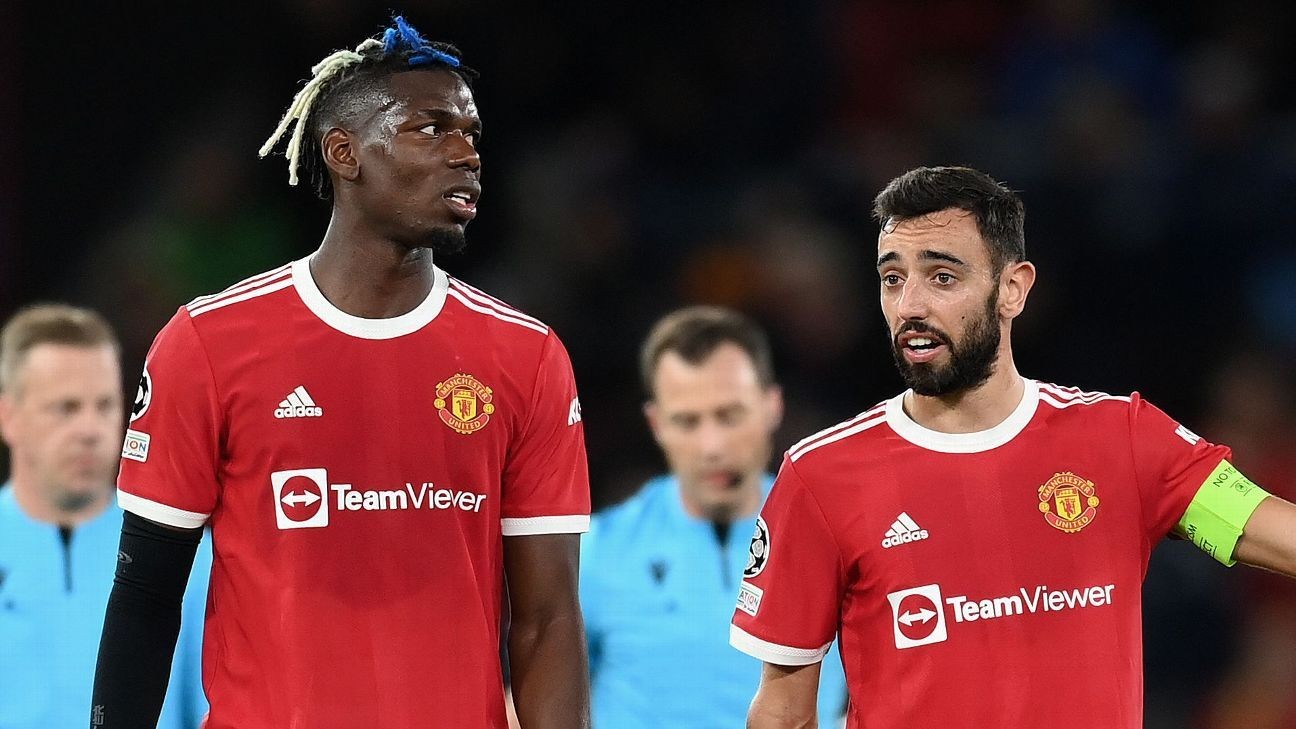 It's never a good sign for a manager when his most high-profile players begin to talk openly about a need for improvement, so for Ole Gunnar Solskjaer at Manchester United, there can be no positive spin about Paul Pogba following Bruno Fernandes by publicly calling for things to change at Old Trafford.

Of course, Solskjaer this week will likely trot out the usual damage-limitation tactic with comments about players showing how much they care when they vent their frustrations, but he will have been in enough dressing rooms during his playing career to read between the lines when it comes to players questioning tactics or mentality. Quite simply, players don't call for improvement when things are going well and they certainly don't do it when they play for a manager who is the dominant personality at their club.

Ask yourself when Manchester City manager Pep Guardiola or Liverpool boss Jurgen Klopp last had to put up with senior players speaking of the need for "change" or telling the world that "we cannot do this anymore" after a negative result. Similarly, think back to when, if ever, Sir Alex Ferguson had to read or hear comments from his players along the lines of those issued by Pogba after Saturday's 4-2 defeat at Leicester City.

"We have been having these kind of games for a long time and haven't found the problem," Pogba said postmatch at the King Power Stadium. "We have conceded easy and stupid goals.

"We know that the fans were going to push and put pressure on us and we need to be more mature, play with more experience and arrogance -- in a good way -- by taking the ball and playing our football.

There is quite a lot to unpack in Pogba's postmatch quotes. He talks of long-standing problems, a need for players to be more mature -- he even questions the mindset of the squad. But by talking about finding the "mentality and tactics" to win, he dropped everything straight at the feet of Solskjaer.

But it is not just Pogba. After the 1-1 draw at home to Everton earlier this month, Fernandes also delivered an exasperated assessment of United's progress, or lack thereof, this season.

"We have to learn and the time is now," Fernandes said. "We cannot do this anymore. We did it so many times, we cannot slow the game down when we're winning.

"We have to make it quicker, score once again, get one or two more goals and after that, maybe you can slow it down and make them run a bit more."

Neither Pogba nor Fernandes directed their comments at Solskjaer. To have called out their manager in such clear fashion would have been a challenge to his authority, but even by being nuanced, both players undermined Solskjaer's position. To many, it will be regarded as a bold move by Pogba to demand improvement considering that he has consistently failed to play to his potential since returning to United from Juventus in a world-record transfer in 2016. Pogba has had five years to help drag the team to the heights he, and others, expect of the club, but he is one of those who Solskjaer could accuse of letting him down on more than one occasion. Fernandes has been a more consistent performer since his arrival at Old Trafford from Sporting Lisbon in January 2020, but the Portugal midfielder has lost his spark this season and his own performances have been below the standard he has previously set.

But speak to people within the game -- players, ex-players and coaches -- and they will often speak of how players will always look for excuses elsewhere before pinning any element of blame on themselves. Managers have had to deal with this for years, and recent seasons are littered with examples of some of the biggest names in management losing their jobs because world-class players have allowed their boss to shoulder the blame for poor results.

But even though sources at United have made it clear that Solskjaer's position is not under threat and that the Norwegian knows he has the backing of the club's owners, the Glazer family, the comments of Pogba and Fernandes show that the sands are now beginning to shift under his feet.

Regardless of who they blame for the problems that have seen United win just one of their last five games, exit the Carabao Cup at the first hurdle and drop to sixth in the Premier League table, Pogba and Fernandes have now admitted publicly that things aren't right at Old Trafford and that the players aren't happy.

If they were coded messages to Solskjaer and his coaches to raise their game and make the team better, they must now be acted upon because Pogba and Fernandes have exposed the cracks.

United face Atalanta and Liverpool in two crucial games at Old Trafford this week and a defeat in either will leave them facing an uphill battle to succeed in the Champions League or Premier League.

Solskjaer needs his players to do their talking on the pitch in both games, rather than speak out afterwards, but if the same old problems surface again, he knows that he won't be able to put the genie back into the bottle.