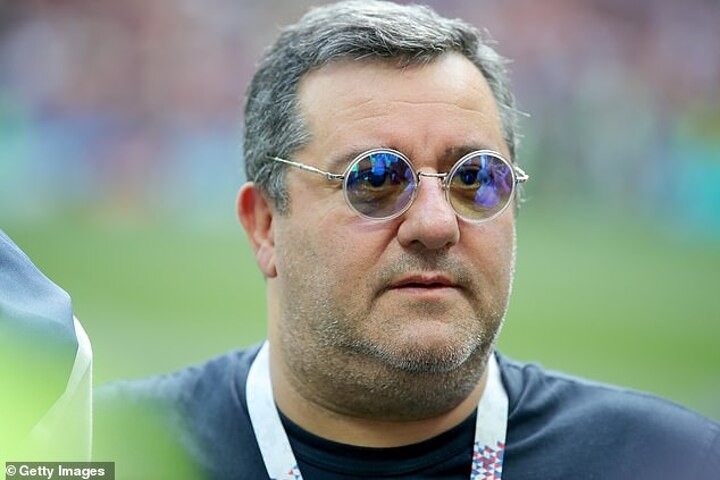 Paul Pogba's agent Mino Raiola has dismissed claims that he destabilised Manchester United with his outburst about Paul Pogba's future.

The super-agent gave an interview in Italy on the eve of Manchester United's crucial Champions League group encounter at RB Leipzig last December in which he said the club should sell the midfielder this summer because he 'has to change teams'.

A day later the Red Devils, with Pogba named as a substitute, crashed out of the Champions League after a 3-2 defeat to RB Leipzig and Raiola came under fire from some supporters for the timing of his controversial comments.

But in an interview on Tuesday, he told BBC Sport: 'I just expressed an opinion, I didn't want to cause any problem.

'I don't think that it destabilised anybody, because they had a fantastic run and they were even first, for a period, in the league.

'You think big players like Paul Pogba - or [Ole Gunnar] Solskjaer, who won everything in his life - get destabilised by what Mino Raiola says? Come on, please. But I don't talk about it any more. It makes life a little bit boring, but it is what it is.'

The outspoken Raiola - who has also represented Belgium striker Romelu Lukaku, Italy forward Mario Balotelli and Netherlands centre-back Matthijs de Ligt, has had run-ins with a series of other managers, including Sir Alex Ferguson, Pep Guardiola and Jurgen Klopp, but says he has learned lessons.

He said: 'Whenever I tell my opinion, everyone in England goes berserk, and I am the worst agent, or the best agent…and the clubs get so stressed from the public and journalists that I have learned not to talk much about it.'

Claims that Raiola earned £41m from Pogba's world-record £89m transfer from Juventus to Manchester United in 2016 intensified criticism of agents.

But he insists the perception of greed and excess is unfair.

'It's not nice always to hear this same preconception,' Raiola said.

'But maybe the public can also think: 'If this man is so greedy and so bad, how are his players all happy and stay with him?'

'I would be lying if I said it didn't bother me…how can you judge if I was a good agent for Ibrahimovic? The only one who can judge that is Ibra himself.

'I don't have power and influence… my job is to get the best deal done for my player. And no more than that. And doing that is to provide him with a whole range of services that people don't even know.

'My players don't call me a parasite, and that's who I work for. I only care what my players call me.'