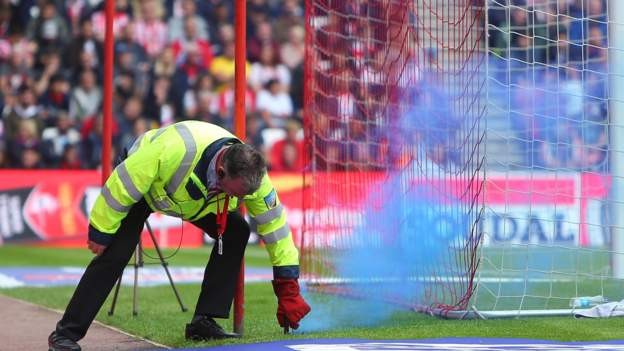 Sunderland say they are "extremely disappointed" about the alleged conduct of a "small minority" of Coventry City fans during Sunday's Championship game.

Several incidents were reported by supporters of both clubs at the Stadium of Light, according to the Black Cats.

They said objects such as pyrotechnics, bottles and coins were allegedly thrown towards home fans in the North Stand.

In a statement,external-link Sunderland said police had started an investigation to identify the people responsible.

Coventry City commended the good behaviour of the vast majority of fans of both sides at the match, but made clear their stance against flares.

They also stated that the incidents were "isolated" on what they described as a "very successful day in general for Sunderland's matchday operation".

The Sky Blues' statement endedexternal-link: "We will be conducting investigations with relevant authorities privately and take the appropriate action against any individual that is identified as a perpetrator."

The incidents happened just days after the Premier League and the EFL introduced new measures to clamp down on fan disorder going into the new season.

These followed a rise in anti-social behaviour last season, which included a number of pitch invasions and the increased use of pyrotechnics and smoke bombs.

Individuals who come on to the pitch or are seen carrying or using pyrotechnics will receive an automatic club ban.

Despite this, there were a number of incidents this weekend.

A Crewe Alexandra supporter required "urgent medical attention" after a flare was let off in the away end during their 2-1 victory at Rochdale on Saturday.

The use of flares was also seen amongst Liverpool supporters in the Community Shield at Leicester's King Power Stadium, and by Rayo Vallecano fans during the Spanish club's friendly with Manchester United at Old Trafford on Sunday.

Sunderland stressed that the alleged misconduct had been caused by a "small minority of visiting supporters" who had caused problems, from a contingent of close to 2,000 Coventry fans in an overall crowd of 40,851.

The Wearside club issued an apology to any supporters who may have been affected and reported that they are "in dialogue" with supporters' groups to ensure such incidents are not repeated.