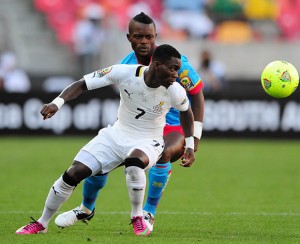 Porto must sell Tottenham and Liverpool target Christian Atsu in 20 DAYS or risk losing the Ghanaian winger on a free transfer, GHANAsoccernet.com can exclusively reveal.

The 21-year-old's contract with the Portuguese giants expires in June next year which means he can sign a pre-contract agreement with another club in January.

According to FIFA laws, a player can reach an agreement with another club with six months remaining on his expiring contract with his current club.

With the current transfer window set to close on 31 August in Europe, Porto must organise for a quick sale of the youngerster who is refusing to sign a new deal.

If they are unable to sell the player in 20 days time, he can reach an agreement with another club when the transfer window reopens in January.

Atsu has been locked in a contract wrangle with Porto all summer, with the club keen to tie down the Ghana international to a new deal and increase his buy-out clause.

However, the 21-year-old has refused all offers from the club as he seeks to win a move away from Porto.

Tottenham and Liverpool are said to be interested in the youngster but are yet to put in an official bid to prise the player away from Porto.

Atsu been left out of Porto's first team squad for next season because of his reluctance to extend his expiring contract.

Liverpool have been strongly linked with a move for Atsu, but GHANAsoccernet.com understands Tottenham and Everton are now actively monitoring the player's situation at Estadio do Dragao.

Porto must now decide to cash in on Atsu this summer rather than lose him on a free transfer in a year's time and the news has alerted the African's suitors.