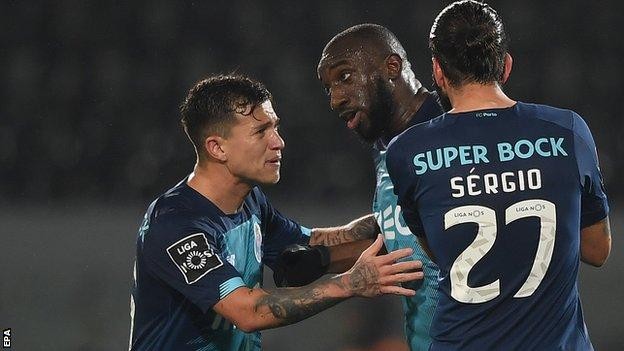 Porto forward Moussa Marega walked off mid-way through his side's win at Vitoria Guimaraes, saying he was subjected to racist abuse from fans.

Marega, 28, started to walk towards the dugouts in the 69th minute, nine minutes after scoring what would prove the winner in Porto's 2-1 victory.

He pointed his thumbs down and also raised his middle fingers to the crowd.

Team-mates and opposition players tried to persuade him to stay on, but he was eventually substituted.

"We are a family regardless of nationality, skin colour, hair colour," said Porto boss Sergio Conceicao. "We are human, we deserve respect. What happened here is unfortunate.

"We are completely indignant about what happened. I know the passion that exists for Vitoria and I think most of the fans do not see themselves in the same attitude of some people who have insulted Moussa since the warm-up."

FC Porto's match report on their website described it as "a sad situation that should make the Guimaraes club and Portuguese football blush with shame".

Team-mates including Alex Telles, Sergio Oliveira and Ivan Marcano all tried to stop Marega walking off the pitch, grabbing the Malian player around the waist - but he pushed everyone aside on his way to the tunnel.

And staff from the dugouts tried to persuade Marega to remain

Attempt missed. Davidson (Vitória Guimarães) right footed shot from the centre of the box is just a bit too high. Assisted by Florent Hanin with a headed pass.

João Pedro (Vitória Guimarães) wins a free kick in the defensive half.

Zé Luís (FC Porto) wins a free kick in the attacking half.

Attempt missed. Corona (FC Porto) right footed shot from the centre of the box is too high. Assisted by Otávio.

Zé Luís (FC Porto) wins a free kick in the defensive half.

Attempt missed. Iván Marcano (FC Porto) header from the centre of the box is high and wide to the left. Assisted by Sérgio Oliveira with a cross following a corner.

André André (Vitória Guimarães) wins a free kick in the defensive half.

Corona (FC Porto) wins a free kick in the defensive half.

Attempt missed. Florent Hanin (Vitória Guimarães) left footed shot from outside the box is close, but misses to the left. Assisted by Ola John.

Attempt missed. Lucas Evangelista (Vitória Guimarães) left footed shot from the centre of the box misses to the right. Assisted by Florent Hanin with a cross.

André André (Vitória Guimarães) wins a free kick in the defensive half.