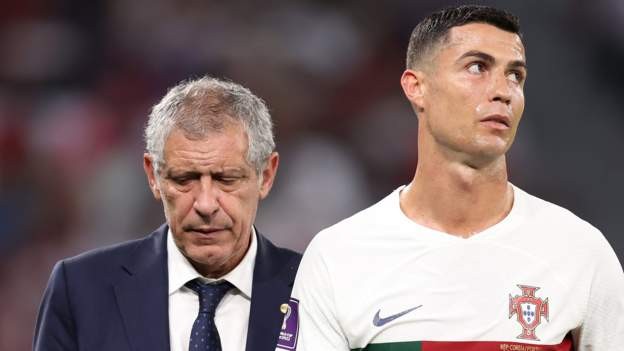 Portugal coach Fernando Santos says he "really didn't like" Cristiano Ronaldo's reaction to being substituted in the World Cup defeat by South Korea.

Ronaldo was taken off 65 minutes into their final group-stage defeat and has denied directing an outburst towards his coach.

Santos refused to comment on reports Ronaldo could be dropped for Tuesday's last-16 match with Switzerland.

"I am not worried if information is right or wrong," said Santos.

"I do not read this type of information. I am focused on my team. We are focusing on training and not paying attention to any polls [in the Portuguese media].

Much of the Portugal news conference on Monday was dominated by talk of the 37-year-old forward, who left Manchester United by mutual consent in November following a controversial interview.

Saudi Arabian club Al-Nassr have already made a huge offer to sign Ronaldo after the tournament in Qatar, while other clubs have expressed an interest in him.

"I have not spoken to him about this," added Santos.

"We are focused on the World Cup. I don't know anything about this other issue."

Switzerland were really passive against Brazil and didn't manage a shot on target, but their other games in Qatar give us a better idea of what to expect from them here.

Portugal have some excellent players but the Swiss will be full of confidence after the way they overcame Serbia to get to the last 16. They also beat Portugal when they played them in the Nations League in June.

This will be close and I have a feeling Cristiano Ronaldo will have a big say in the outcome - although not necessarily in a positive way.

It is a risk-versus-reward scenario for Portugal if they pick Ronaldo, because his influence on the team is massive, but they might have a better starter who should be in the side.

If this tie goes the distance, how long should he stay on the pitch?

Sutton's prediction: 1-1 - Switzerland to win on penalties after extra time, with Ronaldo missing the decisive spot-kick.

This will be the third meeting between Portugal and Switzerland in 2022, having faced each other twice in the Nations League in June. Portugal won 4-0 in a match played in Lisbon, before Switzerland won 1-0 in Geneva a week later.Portugal will be looking to reach the quarter-finals of the World Cup for just a third time, previously doing so in 1966 and in 2006. However, they've failed to win any of their past five knockout games at the tournament, losing each of their past four, including defeats at this stage in 2010 (0-1 vs Spain) and in 2018 (1-2 vs Uruguay).Switzerland won two of their matches in the group stage at the 2022 World Cup (L1 v Brazil), and will be looking to win three games in a single World Cup tournament for the first time in their history.All eight of Cristiano Ronaldo's World Cup goals have come in the group stage of the competition, the joint-most goals scored by a player in the tournament's history without ever netting in the knockout rounds (alongside Lionel Messi). Ronaldo is yet to find the back of the net in any of his six knockout appearances for Portugal at the World Cup, despite playing 514 minutes and having 25 total goal attempts.