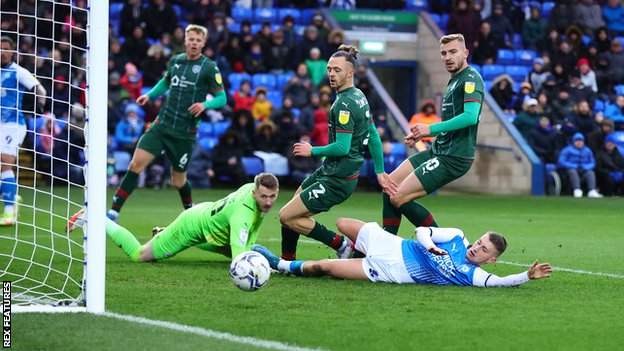 Peterborough United and Barnsley had to settle for a point each, after a cagey 0-0 draw that was subject to a delay after the floodlights failed inside the Weston Homes Stadium.

With both sides confined to the relegation zone and struggling for wins, it was unsurprising the match was bereft of quality in front of goal.

The result keeps both teams in the bottom three with just six wins between them this season.

Both Peterborough and Barnsley came into the match on the back of torrid runs, having lost their past three games in the league, sat in the relegation zone and desperate for a win.

Collectively, they had lost 24 matches between them this season, while Barnsley's tally of 13 goals is the fewest in the Championship.

The first half saw just one shot on target apiece, the first of which did not come until 20 minutes in when Barnsley's Cauley Woodrow forced Posh keeper Dai Cornell to dive low and make a save with a long-distance strike.

The best chance of the half then fell to 19-year-old Corbett on his debut. He stretched but couldn't quite tap the ball in after Clarke-Harris sent a shot across the front of the goal.

Collins made a crucial save just before the hour mark, using his feet to deny Clarke-Harris who found space in the box.

But when the floodlights went out at London Road with 10 minutes to go, it was a metaphor fitting of the uneventful spectacle fans had been subjected to.

The players were briefly sent to the changing rooms and when they returned a short while later, Joel Randall missed a golden opportunity to snatch all three points for the hosts.

He was picked out in the box by Siriki Dembele but sent the ball flying over the bar.

The result means both teams remain in the bottom three, with Peterborough four points from safety and Barnsley eight.

Jack Taylor (Peterborough United) wins a free kick in the attacking half.

Attempt saved. Carlton Morris (Barnsley) right footed shot from the right side of the box is saved in the bottom right corner. Assisted by Romal Palmer.

Claudio Gomes (Barnsley) is shown the yellow card for a bad foul.

Nathan Thompson (Peterborough United) wins a free kick in the attacking half.

Josh Knight (Peterborough United) wins a free kick in the defensive half.

Attempt saved. Cauley Woodrow (Barnsley) right footed shot from the right side of the box is saved in the bottom right corner. Assisted by Bradley Collins.

Attempt missed. Joel Randall (Peterborough United) right footed shot from the centre of the box is high and wide to the right. Assisted by Siriki Dembélé.