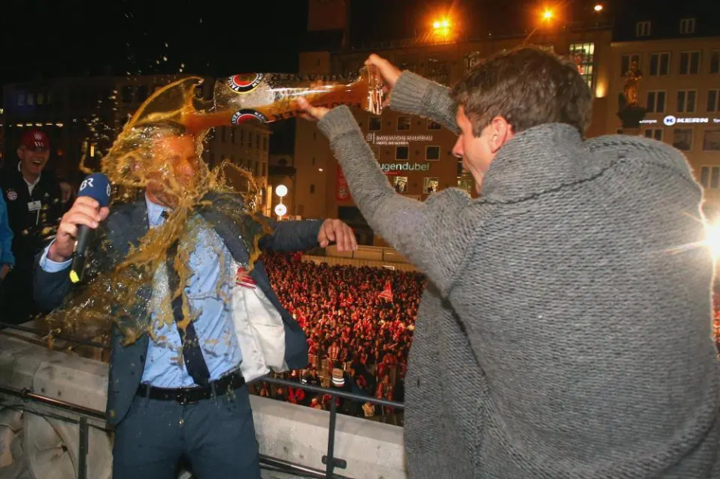 When Thomas Muller isn't banging in goals for Bayern Munich or Die Mannschaft, the German forward is making us laugh.

Muller puts pen to paper on a two-year contract extension that'll keep him at Bayern till 2023.

He revealed: "This club is not just any old employer for me. It’s my passion.

"I’m happy that I’ll be here for two extra years, and I’ll give everything on and off the pitch.”

And you don't doubt that. Married to professional horse trainer Lisa, he also owns a nag called Dave, loves dressing up in Lederhosen and is always clowning around.

If that's not enough, he's calls himself the title of managing director of carrots because of his horse stable, and his madcap antics keep him and his teammates entertained.

Come October, and those brilliant pictures Bayern Munich share of their players enjoying the annual Bavarian beer festival, look out for Muller.

You'll find him dressed to the nines in traditional Lederhosen, pretending to down beers and joshing with his teammates.

He's always got a smile on his face and isn't afraid to dance Gangnam Style.

And since we're speaking of beer, Thomas once poured a cold one over German TV presenter Markus Othmer after winning the 2014 title.

A notorious prankster, Muller doesn't have a horse called Star or Spirit or Lucky... he's opted for the common human name Dave instead.

His missus has her own stables, which Muller calls himself the managing director of carrots at because Bayern permit him from riding.

Muller regularly attends events his dressage rider other half competes in and loves spending time with Dave.

"I come here to watch if everything's fine," he once replied when asked why he loves horses.

"And for the carrots. I'm the managing director of carrots! I watch the dogs. Sometimes I help a little bit but it's her business.

"I enjoy it a lot. They make me feel comfortable, the attitude and what they look like and (the way they) live their lives.

"It's fun. It's easy to relax around horses." Absolutely a-neigh-zing.

Thomas knows the best way to avoid those pesky transfer rumours... and it's a take on the old mobile phone trick.

Celebrities around the globe know the best way to avoid questions from reporters when leaving an airport is to pretend your on a call.

Thomas took that one-step further, fooling us into thinking his passport was his mobile when he walked through a Munich terminal.

Reporters tried to ask if he was moving to Man United, but Muller couldn't hear them with his passport pressed up against his ear.

Brilliant stuff from the German.

HE KNOWS HIS AUDIENCE

The jester of Bavaria knows exactly how to get a crowd going - and we mean that literally.

The scene was set, it was a crunch Champions League quarter-final tie against Porto in 2015.

Needing a 2-0 win, Bayern dismantled the Portuguese giants 6-1 in a thrilling blowout to win 7-4 on aggregate.

Afterwards, the players saluted their faithful fans who were in fine voice.

Realising his opportunity, Thomas ran straight into the crowd and grabbed a megaphone from one of the fans.

He led the celebrations and chants, much to the delight of the home crowd and his teammates couldn't hide their smiles.

He's repeated the trick since, doing the same against Juventus in 2016 following an impressive win.

A COMEDIC TROLL TO HIS TEAM-MATES

The prankster onc teased Mario Gotze during a TV interview for wearing the wrong jersey the last time he won a Bundesliga before joining Bayern.

He purposefully fell over during a pre-orchestrated free kick routine for Germany.

And Muller also told a reporter he would wipe his backside with his golden boot trophy following Germany's 2014 World Cup win.