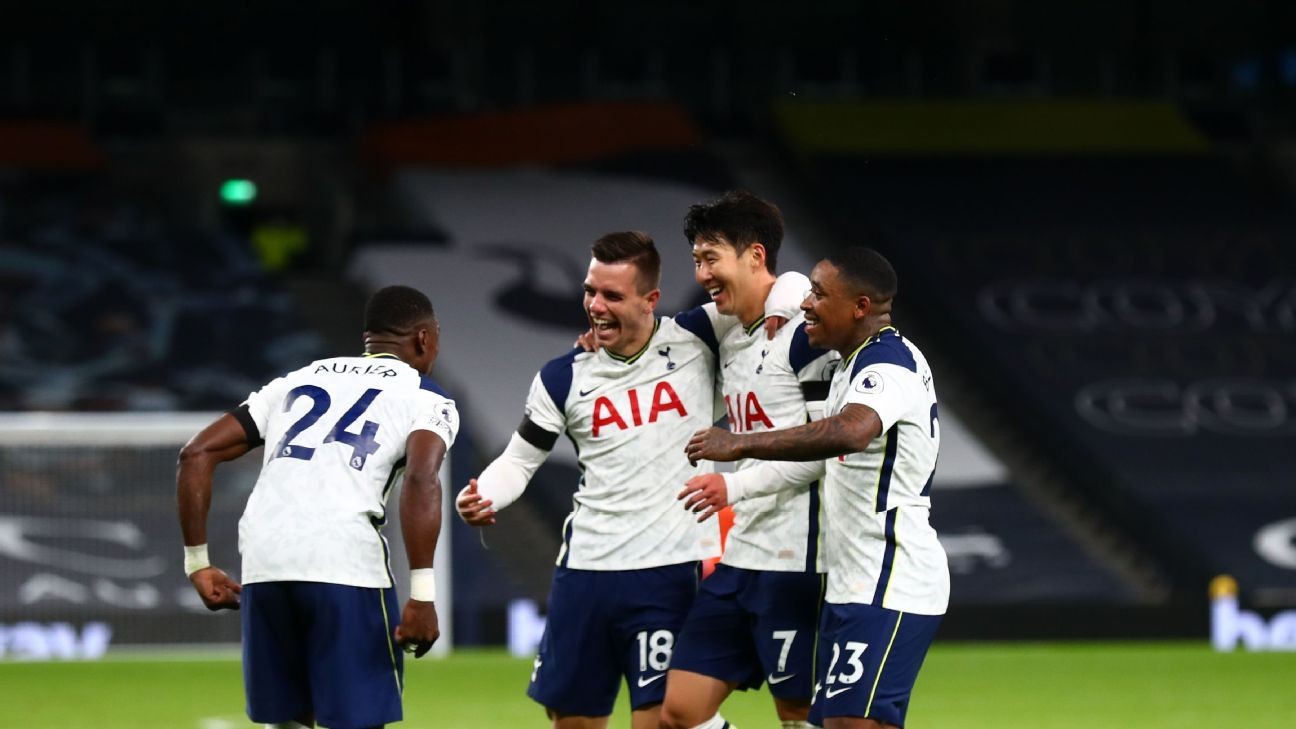 It has been the most unpredictable of seasons, with fixture congestion, mounting injuries and the impact of COVID-19 creating unprecedented challenges for the 20 Premier League clubs.

Arsenal's troubles a reflection on the lack of goals, creativity around AubameyangAbramovich's 1,000th game: The highs and lows of his time at ChelseaLeeds United's Premier League return: Bielsa, Bamford & Co. taking club into modern era

Heading into the arduous month of December, Tottenham are the surprise leaders, Manchester City are stuck in mid-table, while Arsenal are languishing in 14th having made their worst-ever start to a Premier League season. Meanwhile, Sheffield United, the surprise team of last season, are winless after 10 games and rooted to the foot of the table.

It's been a topsy-turvy Premier League season so far, so with 10 games played we look at the storylines that are a surprise, and those that aren't.

Having sneaked into the Europa League on the final weekend of last season, Spurs did not end the 2019-20 campaign like a team that would make such an impressive start this time around. But Jose Mourinho is back at the top of the table and showing signs that he might just be able to become the first manager to win the Premier League with two different clubs.

Time will tell if Spurs can last the pace, but they have the best defensive record so far and only Liverpool and Chelsea have scored more goals, so Mourinho is certainly on the right track.

Jota is more than a backup

Check out all the latest news and debate from the ESPN FC TV team. Stream full episodes on ESPN+ (U.S. only).

When Liverpool sealed a deal worth up to £45m for Wolves forward Diogo Jota in September, it seemed that the Premier League champions had taken an expensive gamble on a forward only likely to be first reserve behind Mohamed Salah, Sadio Mane and Roberto Firmino.

But the Portuguese has proved to be anything but a back-up forward, with nine goals in all competitions and a goal in each of his four league games at Anfield so far.

Carlo Ancelotti's team were the early leaders of the Premier League and, although the Toffees have dropped off the pace in recent games, they remain a contender for a top four finish.

Dominic Calvert-Lewin's 10 Premier League goals have been a crucial factor, but so have the performances of summer signings James Rodriguez, Allan and Abdoulaye Doucoure.

Bamford has stepped up

Leeds United have been an exciting addition to the Premier League under Marcelo Bielsa, but no player has shone as brightly as striker Patrick Bamford.

The 27-year-old had previously scored just one Premier League goal during spells with Chelsea, Crystal Palace, Norwich, Burnley and Middlesbrough and appeared destined to fail at the top level. But Bamford now has seven goals in 10 Premier League games for Leeds and he is proving his doubters wrong.

Kane can create as well as score

One of the biggest surprise of this season has been the reinvention of Tottenham striker Harry Kane as a playmaking No. 10.

The England captain is once again proving to be Mr Consistent for Spurs with seven league goals so far, but he is also sitting at the top of the assists table with nine in 10 games this season.

Make your Bundesliga and Serie A picks to compete for a chance to win ESPN+ for FREE! Make Your Picks

Pep Guardiola's City have been unconvincing so far, but it is unusual to see them in midtable after almost a quarter of their games.

Perhaps a reduced summer break, the failure to sign Lionel Messi, David Silva's summer exit and Sergio Aguero's injury problems have all had an effect, but one thing for certain is that nobody should write City off just yet.

The Arsenal forward was the goal scoring inspiration of the club's FA Cup success last season and his decision to commit to a new three-year contract in September was a major boost for the Gunners.

But Aubameyang's goals have dried up since -- he has just two league goals -- and Arsenal's progress under Mikel Arteta has ground to a halt as a result. Stop Aubameyang and you stop Arsenal.

Grealish is the real deal

The Aston Villa midfielder missed out on a big-money move in the summer and signed a new contract at Villa Park instead, but rather than sulk about failing to seal a switch to a Champions League side, Grealish has kicked on to become one of the standout performers for club and country this season.

The 25-year-old has been Villa's talisman, but he has also grabbed his chance with England and made himself a strong contender for a starting role in Gareth Southgate's XI for Euro 2020.

Inconsistency has been the only consistent thread of Ole Gunnar Solskjaer's reign as manager at Man United, which will hit the two-year mark in mid-December.

Whenever United look set to kick on, they fall down again. New season, same old story.

Managers and players voiced concerns ahead of this season over the increased risk of injuries due to the absence of a regular preseason break and fixture congestion caused by the campaign starting a month later than usual due to the pandemic.

And those fears have been confirmed, with Brighton, Liverpool, Manchester United and Newcastle all missing eight players due to injury. Arsenal and Aston Villa have also been hit hard, with those clubs both having seven players on the sidelines.

VAR is no better

Last season's teething troubles with VAR were just that -- the inevitable stumbles of a new system that everyone was having to adjust to. There can be no such excuses this season, but rather than iron out its flaws, VAR has arguably got worse, with so many decisions angering players, coaches and supporters alike.

Liverpool complained to the Premier League after VAR's worst day of the season at Everton, but the club did not get satisfactory answers to their questions.

The attempt to bring clarity to handball decisions has only succeeded in adding more confusion. There have been some inexplicable penalty decisions this season due to the Premier League adopting the stricter interpretation which was already in force in most other leagues last season.

Handball is now awarded if the hand/arm is clearly away the body and outside the 'body line.' Sounds simple, but it has been anything but. The Premier League adopted a more relaxed interpretation after three rounds of games, but that hasn't stopped the controversy.