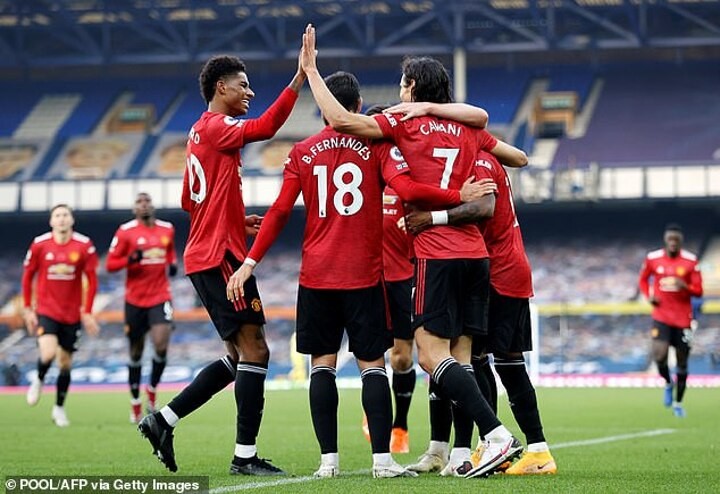 Clubs should practise celebrating goals safely in training to ‘get the hang of it’, Premier League chief executive Richard Masters has said.

Top-flight players have faced mounting criticism this week for continuing to hug in groups as they celebrate goals, in breach of new Covid protocols.

Masters’ suggestion might raise eyebrows with some managers who have argued that football is all about emotion, but he appears to have Frank Lampard on side.

The Chelsea boss said he would consider encouraging his players to avoid celebrating in training and Masters, who also said he doesn’t expect fans back this season, told Sky: ‘I think if every club does that, then they will get the hang of it.

'All sport is played in the moment, with emotion, if we set ourselves the target of perfection, we will fall short.

‘All we’re asking is that players adjust to the situation. I think they understand that we’re in a fortunate position, where we’re able to play, to ply our trade while millions of others aren’t.

‘You’ve got to follow the rules and also set a good example.’

Pep Guardiola says his Manchester City players will try to stick to the protocols but urged: ‘Don’t blame footballers for the pandemic.’

Guardiola, whose 82-year-old mother passed away from the virus last April, believes it would be wrong to accuse footballers of being irresponsible. ‘Honestly we try, I’m pretty sure of that,’ said the City boss ahead of tomorrow night’s game at home to Crystal Palace. ‘All the clubs, all the managers, doctors, want to follow the rules.

‘We know we are concerned how important it is and how difficult the situation is in the UK. Unfortunately a lot of people are dying every day and being infected. We are going to do our best to follow the new rules and what the scientists inform us we have to do.

‘But, please, the situation in the UK is not due to football players, so don’t blame us and the players for irresponsibility in our jobs. It’s a pandemic all around the world. From day one we followed what the Prime Minister says.

‘We know the situation. Hopefully we will score a lot of goals and we have to be careful not to hug much, but sometimes it’s difficult. On the other side, I understand. A lot of people cannot do their jobs and are closing and we are fortunate we can play football.

‘I understand how sensitive everything is, but I don’t think the whole problem or the pandemic right now is due to the players.’

Wolves manager Nuno Espirito Santo agreed with Guardiola and said: ‘We are making a big effort to try to continue.

‘We want to avoid [a stoppage] as we realise it’s tough for society. But if football stops, it cannot be because somebody makes a mistake in a game.

‘Let’s be fair. Everyone in the game has been tested the day before. Football is about emotion and it’s about contact.

‘Everyone — especially the players — are making a big effort to keep football moving. We speak to the players but it’s too emotional not to touch when he scores a goal. I don’t know if there is a solution.’