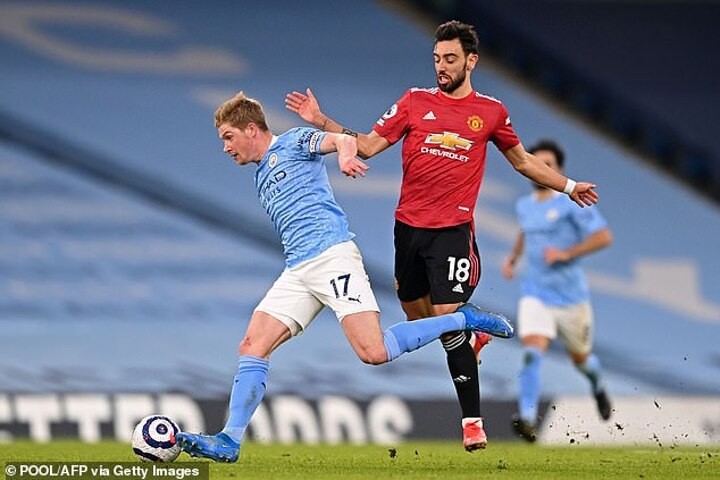 The FA will ban any breakaway clubs from signing foreign players as part of their new rules designed to prevent the Big Six Premier League clubs attempting to set up any new European Super League.

FA chief executive Mark Bullingham says the governing body, which recommends to the Home Office whether work permits should be issued for any foreign player coming to England, insists that no club playing outside official leagues would be able to sign any foreign players.

The FA's powers have already considerably increased post Brexit as they now have power over allowing European Union footballers and coaches into the Premier League. And Bullingham says the FA are prepared to stop the likes of Bruno Fernandes and Paul Pogba playing for Manchester United or Kevin De Bruyne and Ruben Dias playing for Manchester City if clubs try to break away again.

Asked about how the FA could prevent a repeat of Manchester United, Liverpool, Manchester City, Chelsea, Tottenham and Arsenal ditching domestic football, Bullingham said: 'We may tweak some aspects of the visa system to make sure that people only get visas for our competitions which we accredit. So, you can't pull in talent from abroad to play in competitions that we don't sanction. They couldn't bring in foreign players to play in that [breakaway] competition.

Bullingham says that British government is also likely to change competition law to ensure that football is a special case and exempt from certain anti-competitive practices that the Big Six planned to use to force the Premier League and FA to accede to their demands.

Prime Minister Boris Johnson threatened to put a legislative bomb under the Super League and Bullingham said: 'There's [government] legislation. We were very clear early on that we were opposed to a European Super League and we were going to use our rulebook to stop it.

'The clubs were definitely going to take an anti-competitive legal position on that. You can legislate that certain actions are not anti-competitive. That's what we wanted the Government to do, that's what they committed to really quickly. We still want to follow through with some legislation in that way that would give our rulebook more power in that situation.'

'I think you could absolutely get it [agreement] from the Premier League [without the need for legislation] and we were actually starting to have conversations with the Premier League before the review. There are quite a few areas where we overlap, and let's look at whether we can simplify that.'

But he did concede that a new body is required for financial and ethical tests on fit and proper owners and to ensure fan representation.

'We don't agree with people bandying around an independent regulator, without really specifying what it is. If you're talking about some new body that has some independence in it which looks after financial aspects of football, I think we'd be really keen to explore some areas of that.

'We absolutely think that body could potentially be more involved in the owners and directors test and… the protection of club heritage assets. We think there's also some areas where fans can have more says, absolutely... but if you're asking me if I think there should be a new body to sit above the existing bodies of football, no I don't.'