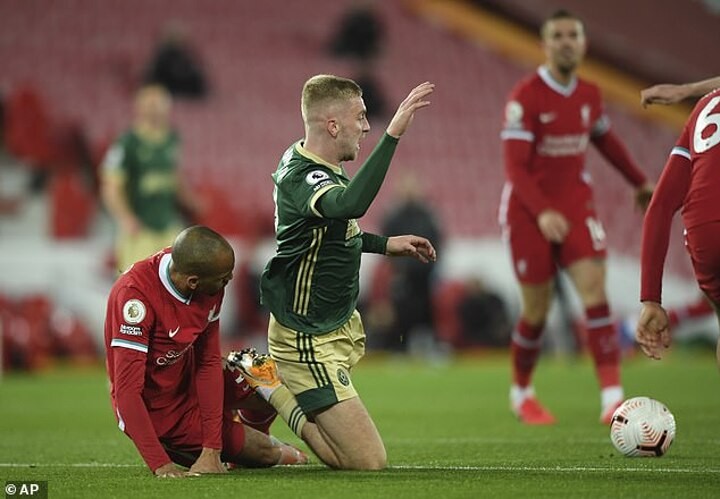 There was yet more VAR controversy in Liverpool's match against Sheffield United on Saturday when the Blades were awarded a penalty in the first half of the Reds' 2-1 win.

The referee had originally given a free kick just outside the area but the Video Assistant Referee upgraded it to a penalty based on where the foul happened.

It was initially claimed that officials did not check whether Fabinho had actually fouled Oli McBurnie in the first place and instead only looked at whether it was outside the box.

However the Premier League later revealed they did look at both elements and ruled that giving a foul was not a clear and obvious error.

Fabinho's left leg caught Oli McBurnie, and the Sheffield United man went down, prompting the referee to blow his whistle.

It was a very close call, with the tackle appearing to take place right on the line of the penalty area, and VAR ruled that it was a penalty.

Not only was there dispute over the position of where the tackle happened, but also whether it was a foul or not, with Fabinho getting the ball on his way through.

A lot of fans were furious on social media, with one saying: 'VAR is a genuine embarrassment. Not only did Fabinho win the ball, it's outside the box. Game. Is. Gone.'

Meanwhile, a Manchester United fan admitted that even he thought Liverpool were hard done by to have a penalty awarded against them.

Earlier in the evening, officials were under fire after a penalty was not given after Harry Maguire appeared to bring Cesar Azpilicueta to the ground by his neck in the 0-0 draw between Manchester United and Chelsea, prompting one fan to call the inconsistency 'embarrassing.'

And of course, VAR has been criticised since its inception, with controversial calls seeming to happen every week in the Premier League.

As a result of this latest incident, Sander Berge sent goalkeeper Alisson Becker the wrong way with his penalty kick, calmly slotting the ball into the right corner to give Sheffield United the lead.

Liverpool fought back though, as Roberto Firmino found the equaliser later in the first half, and Diogo Jota put his team ahead with a goal in the second.