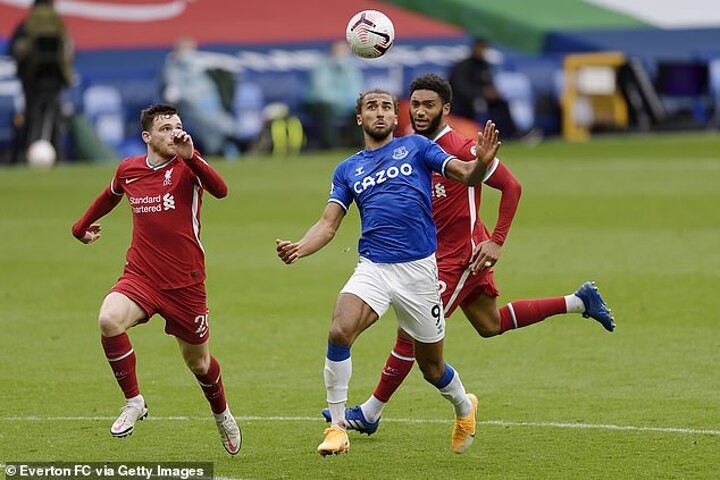 After Liverpool won the Premier League title by a staggering 18 points last season, this year's top-flight in England couldn't be more open.

Six weeks into this crazy season which followed a shortened summer break and the banning of fans from football grounds, the top 14 teams in the league are distanced by just five points. The same margin separated just the top two teams - Liverpool and Manchester City - at this stage last term.

One reason why the Premier League is so open is due to slow starts from so-called 'Big Six' - who all suffered defeats in the opening five matches of the season for the first time since 2014.

This has led to none of the elite group of English teams - bar Liverpool - being in the top-eight of the league at this stage of the season, which begs the question - can a different team shock the top-flight title race this year?

As Carlo Ancelotti's Everton lead the way as the league moves into November, it is the first time a 'non-Big Six' team has been top of the pile after five games since Portsmouth in 2006.

Harry Redknapp's Pompey ended up finishing ninth that year, but the 'Big Six' have plenty to do if they want to catch this season's young pretenders.

Sportsmail looks at where England's biggest clubs have been going wrong so far this season and what they need to do to get their title race spot back...

LIVERPOOL - LIGHT AT THE BACK

Out of all the 'Big Six' sides, Jurgen Klopp's champions have started the better and sit joint-top of the table alongside Merseyside derby rivals Everton. But it has still been a far-from-convincing start by the Reds, particularly from a defensive standpoint.

No club in the league has conceded more goals than Liverpool so far this season, who have shipped 14 goals which is the same as bottom club Fulham. Half of that tally came in the embarrassing 7-2 defeat to Aston Villa this month where their defence imploded.

Klopp's side have kept just one clean sheet in the league so far, as they continue to feel the impact of losing Virgil van Dijk to a potentially season-ending ankle ligament injury.

Joel Matip's additional injury woes mean Liverpool are incredibly light at the back, as Klopp's decision not to sign a new centre-back over the summer comes into question.

But the warning signs were there before van Dijk got injured. The Reds became the first Premier League reigning champions to concede seven goals since 1953 in their shock loss to Villa.

Top-flight teams are working out how to hurt Liverpool through their incredibly high defensive line, which often leaves two Reds centre-backs isolated due to the attacking intent form full-backs Trent Alexander-Arnold and Andy Robertson.

Makeshift centre-half Fabinho struggled in the first-half of Liverpool's win over Sheffield United and conceded a penalty, while the Blades arguably should have ended up with more spot-kicks as the Reds backline struggled in the opening period.

And as Glen Johnson pointed out this week, van Dijk's absence means Liverpool are more vulnerable at the back than ever before if teams try to hit them on the break.

Liverpool have no issues at the top end of the pitch - they are still scoring goals for fun.

But if coaches train their teams to be defensively solid against Klopp's side, then the Reds will end up with more disappointing results.

It was a summer of great promise at Stamford Bridge as Frank Lampard overhauled his squad with £253million-worth of new blood - but the Blues' campaign has not gone to plan so far.

The west Londoners have drawn four out of their last five league games, with the majority of them being high-scoring matches. In short, Chelsea's dodgy defence continues to let down their new all-star attack.

After a year in the job, Lampard still can't work out his best back line combination. Brazilian defender Thiago Silva looks like a solid acquisition but the likes of Kurt Zouma, Andreas Christensen and Fikayo Tomori have dipped in and out of firm and Toni Rudiger has been exiled.

Speaking before the goalless draw with Manchester United, Sportsmail columnist Martin Keown pointed out the lack of concentration among the Blues backline.

The former Premier League defender said: 'What has stood out is the mannequin-like ball-watching from Chelsea's defenders.

'They stand around admiring the pretty football being played in front of them rather than preparing for when they lose possession.'

One area that Lampard appears to have fixed, however, is the goalkeeping dilemma as new £20million man Edouard Mendy was the difference between a draw and a defeat in the goalless showing at Manchester United this weekend.

But the Old Trafford blank does shine a light on whether Chelsea's new men up front have properly settled in at Stamford Bridge yet.

Both Timo Werner and Kai Havertz have shown glimpses of potential but have gone missing in the big games so far this term. The only game in which either player has found the net came in the 3-3 draw with Southampton this month.

The German duo are forming a fluid front four alongside Mason Mount and Christian Pulisic but may need more tactical input from Lampard to get more goals.

There plenty to come from Chelsea - the likes of Hakim Ziyech and Christian Pulisic are coming back from injury - but time is running out for Lampard to justify his summer spree.

While many will point at Manchester City and say 'they've only lost one game', it's bizarre to think that Pep Guardiola has won just two out of his opening five matches.

It is also City's worst start to a league season under their iconic manager, whose side was famed for their long winning runs at the start of his tenure.

Though the club have been let down by a considerably long injury list so far this campaign, which is why bookmakers are still placing them as Premier League title favourites.

The loss of Sergio Aguero and Gabriel Jesus earlier this season was a major blow and while the former has returned from the sidelines, his injury history means Guardiola tends to bring him off in and around the 60-minute stage.

Raheem Sterling has often adopted a central role to overcome this problem, which means City have even less efficiency out wide following the loss of Leroy Sane to Bayern Munich this summer.

There are also question marks in Guardiola's squad about the reliability over their defensive players. Aymeric Laporte is the only reliable option at the back, with Kyle Walker, Eric Garcia and Benjamin Mendy all making high-profile errors in the opening games.

Meanwhile, defensive midfielder Rodri is still failing to live up to the hype as Fernandinho's long-term successor following his £63million move from Atletico Madrid.

With Garcia refusing to extend his contract at the club, Nathan Ake still getting used to life at the Etihad and Mendy being frequently injured, there's no real long-term defensive plan at City.

Manchester United's progress has been halted after an impressive third-placed finish last season with Ole Gunnar Solskjaer's side dropping points three times in their first five games - all of them at home.

Though fingers can be pointed towards poor summer planning and a series of off-the-pitch distractions to this slow start to the campaign, which has seen them fail to win their opening three home games for the first time in nearly 50 years.

A lack of sporting director at Old Trafford means the Red Devils' transfer window business was rather sporadic. The club have so far splashed out £40million on marquee signing Donny van de Beek so he can sit behind Paul Pogba and Bruno Fernandes in the attacking midfield pecking order.

With the window running down into its final hours, United eventually bought the bullet again and signed unwanted free agent Edinson Cavani and left-back Alex Telles from Porto, as main targets such as Jadon Sancho fell through the net.

In and amongst all that questionable spending came the off-field dramas which have raised concerns about the squad's current culture.

Captain Harry Maguire's European holiday exploits have not coincided well with a sloppy start to the season from a defensive point of view, while Mason Greenwood has yet to hit the heights of last term following his England debacle with Phil Foden.

Other niggling incidents such as Anthony Martial's careless red card in the 6-1 defeat to Tottenham this month means Solskjaer often has his work cut out at Old Trafford.

If the Norwegian boss can get goals from new man Cavani or even reignite the Greenwood, Martial and Marcus Rashford front three from last season, then United may have a chance to pull themselves back into the fold.

Mikel Arteta's Gunners started the season brightly with three wins from their first four games and looked to be heading in the right direction following their FA Cup triumph in August.

But back-to-back defeats to Manchester City and Leicester in which the north Londoners failed to find the net have raised concerns about Arsenal's ability to create chances from open play scenarios.

If teams can stop Arsenal's dynamic front three, normally consisting of Pierre-Emerick Aubameyang, Alex Lacazette and one of Willian or Nicolas Pepe, then Arteta's structure allows for little other attacking intent.

Bukayo Saka is a bright spark in midfield and Thomas Partey can create some chances from deep, but one option is still raw while the other is still finding his feet following his £45million move from Atletico Madrid.

A lack of midfield creation is a problem that Arteta tried to fix by bringing in Lyon playmaker Houssem Aouar in the transfer window, but the Gunners were outpriced by the French club.

Mesut Ozil was an internal option for creativity but all ties appeared to have been cut following his omission from Arsenal's 25-man league squad.

This meant Arteta had to resort to a flat midfield three of Partey, Dani Ceballos and Granit Xhaka, which is a system that Unai Emery tried and failed with during his Emirates Stadium tenure.

The goals have also dried up for captain Aubameyang in recent weeks. The Gabon striker had six successful strikes in six games this time last year but has not scored for the Gunners since opening his account on the opening day at Fulham.

And as always with Arsenal, there are major question marks about their defensive performances.

The Gunners fell apart against Leicester after David Luiz went off injured and usual suspects Shkodran Mustafi and Xhaka let Cenzig Under and Jamie Vardy run clear to net the winning goal for the latter on Sunday night.

Spurs' 3-3 draw with West Ham summed up the last 15 years for the north London side. No matter how impressive Tottenham look going forward, there will always be that mentally weak side to their game to creep up on them.

Manager Jose Mourinho, who has won 22 trophies as a coach, has tried to fixed that problem by signing players who have lifted titles at their former clubs.

Figures such as Joe Hart, Pierre-Emile Hojbjerg, Gareth Bale and even Gedson Fernandes all won league trophies before arriving at White Hart Lane as Mourinho looks to add experience to the largely trophyless group consisting of Harry Kane, Dele Alli and Son Heung-Min.

But Spurs have still shown a tendency to fall at the final hurdle this season. The West Ham collapse followed the late equaliser conceded against Newcastle and the lack of attacking urgency seen in their opening day loss to Everton in September.

There are some reasons to be positive for Mourinho's men. Son and Kane are forming a dynamic partnership at the top end of the pitch, while the arrival of Bale has created a feel-good atmosphere at the club.

And victory at Burnley on Monday night could see Spurs make early ground on their rivals and move into the top-five. Unless their usual habits reappear, of course.