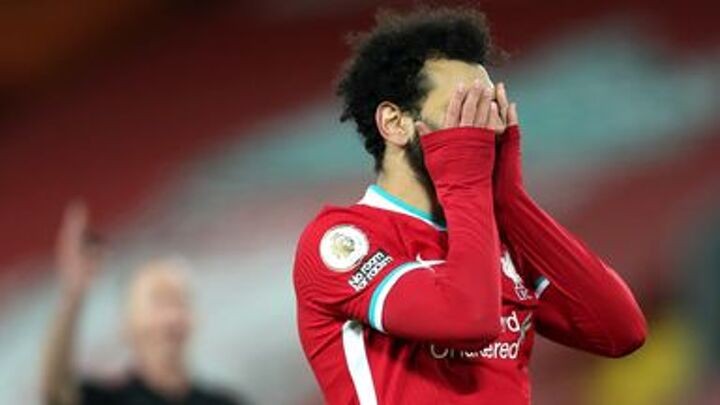 Where have Liverpool's goals gone?

What has happened to Liverpool's attack? The 7-2 defeat to Aston Villa was an aberration and the injuries at the back became the focus of debate before Christmas but it is the chronic lack of firepower that has undermined their title defence in recent weeks.

On the face of it, they are the Premier League top scorers. But five games since Christmas - including three against teams in the bottom half of the Premier League table - have yielded only one goal and no victories. Now their unbeaten home record at Anfield that dated back to April 2017 is gone after blanking against Burnley.

Suddenly, Liverpool look blunt in front of goal and Jurgen Klopp is searching for answers. Divock Origi is not it. He started this game with Mohamed Salah dropping to the bench but squandered the clearest opening of the match when hitting the crossbar in the first half.

Was it an error of judgment by Klopp to go into this game without Salah and Roberto Firmino in the starting line-up? That argument would carry more weight if the pair had looked any likelier to find the breakthrough after they were introduced. Both are struggling.

The dip has coincided with Thiago's return to the side but any suggestion that the midfielder has slowed down the tempo does not really explain the basic errors that have crept into the performances of those around him. Almost every key player looks woefully out of form.

Trent Alexander-Arnold kicking the ball out of play when attempting a simple pass in stoppage time summed up his night - and perhaps even his season. The young dynamo has one assist since September and that was the fourth goal against Crystal Palace. Only one of his 22 crosses against Burnley found a team-mate and his defending was lacklustre too.

Not that the forwards can blame it all on service. What few chances that are being created continue to be wasted - many of them by Firmino. The Brazilian's reputation as a selfless player precedes him but does not explain the fact that he has had 16 shots of his own through this barren run of results without once finding the back of the net.

In Diogo Jota's absence, there is still far too much onus on Salah and Sadio Mane to conjure up the goals and both look well below their best. The result is that Liverpool look lost.

There is still time to turn it around but the fixture list in the coming weeks and months is more daunting. Even if they do improve their performances, an average points haul in the forthcoming games might not be enough to put them back in a strong position. Put simply, they have wasted a series of winnable matches and now find themselves playing catch up.
Adam Bate

Nick Pope loves a trip to Anfield. In July, he was named man of the match for his heroics as Burnley drew 1-1 at the then-champions elect. Sean Dyche's men went one better this time.

Admittedly, Burnley faced a Liverpool side who are following their own style somewhat - tight at the back but lacking goals. While the Reds were unable to find a cutting edge, they also found Pope once again in sensational form on his 100th Burnley start.

He made some routine saves early on, but showed off his skills to deny Andy Robertson, Trent Alexander-Arnold and Mohamed Salah and kept a sixth clean sheet in his last 11 Premier League games.

In fact, since the start of last season, no goalkeeper has made more saves against a single opponent in the Premier League than Pope against Liverpool (19). Pope has made 14 saves in his last two games at Anfield, including six on Thursday night.

He has been Burnley's Mr Consistent for a while now and should be giving England manager Gareth Southgate some food for thought ahead of Euro 2020. But what does he have to do to pry the No 1 shirt from Jordan Pickford?

"I think he has a challenge on his hands in that Burnley don't play the same style that England do in terms of playing out from the back. If that's a factor, I don't know, but all he can do is keep putting the performances in.

"He's in the England mix and right in the manager's mind so from his point of view, I'm sure it's just more of the same."
Charlotte Marsh

Keep calm and carry on: it's the United way

This Manchester United team still do plenty wrong - but one thing they have down to a tee is being able to take a punch. They have a strong chin.

Ademola Lookman was the latest opposition player to score the first goal in a United fixture, meaning the league leaders have now won seven Premier League games having gone behind this season. That equates to 21 points picked up from losing positions - 11 more than the next-best record, posted by Liverpool.

Conceding first is seemingly when United are at their most comfortable. That pressure to go and chase a game brings out their game-changing talent. At Fulham, it was Edinson Cavani and Paul Pogba who rose to the occasion, putting in outstanding performances backed up by quality finishing.

As we approach the halfway stage of this bonkers season, United obviously need to show more components than just staying calm in matches to sustain a title bid. But one thing in their favour is their ceiling level - they haven't reached it yet. There is without question more to come from a team that still have yet to really put in that "wow" performance that reeks of a potential title winner. Surely there is one is around the corner soon.

'Keep calm and carry on' will be the message for the time being though.
Lewis Jones

Manchester City have been flying for some time now and a sixth consecutive Premier League win took them top of the table on Wednesday night, albeit only while they waited for Manchester United to play catch-up.

The manner of their win over a good Aston Villa side was more impressive than just another three points moving them superficially to the position of champions.

In both boxes, City did what they had to, something over the past year and a half they haven't done enough. Their slow start to the season owed a good deal to being unable to kill games off - scoring only once to draw with West Ham, West Brom and Leeds, and none at all when beaten 2-0 at Tottenham in November.

It looked like it could be a similarly frustrating night against Villa to halt their surge up the table, but they had the winning touch that you need to get three points when you are not at your best.

How many times in their back-to-back title-winning seasons did we see them dig it out late on? Remember Sterling versus Southampton, even Kompany versus Leicester? Maybe Silva versus Aston Villa will have its own page in their history books if they are top of the pile by the end of the season.

There is a long way to go, but with Ruben Dias and John Stones looking the solid partnership no one could have predicted and the goals starting to flow again in attack - even without Sergio Aguero - City are as in the mix as they have been for a long time.
Ron Walker

Everything but the goal for Fulham

Scott Parker is a manager who wears his heart on his sleeve. There was no hiding the frustration he felt watching Ruben Loftus-Cheek squander two fantastic chances to pull level against Manchester United. He knows chances like the ones Fulham are creating need to start dropping and the Cottagers need to turn plaudits into points.

Defensively all is pretty rosy with a good shape to Fulham's play whilst in midfield, with Andre-Frank Zambo Anguissa at the heart, they knock the ball around with great confidence. However, it's in the box where they crumble. Since their 2-1 win over Leicester in November, they have scored just four goals, the lowest return of any Premier League side during that period.

Loftus-Cheek was the culprit this time around, further enhancing the flaw within his game in front of goal. A player in his position, carrying that sort of talent really should have more than just 10 Premier League goals to his name in 90 appearances.
Lewis Jones

One thing that has been understandably lost amid the wonder at West Ham's form this season is how they have finally, finally turned the London Stadium into a fortress.

It would be unfair to suggest the only thing the Hammers needed to improve their home form was to play in front of an empty stadium because their form has been built on 14 points from nine away games as well.

But back-to-back wins in Stratford, such a weight around the neck of the club for so long, means only Liverpool and Manchester City have picked up more points at home.

So much of that comes down to removing their soft underbelly. Things were looking good when Jarrod Bowen chested in an injury-time opener against a newly confident West Brom on Tuesday night, but the moment Matheus Pereira equalised five minutes after half-time, you wondered whether this was going to be a familiar capitulation.

Not this time. Having weathered the storm for a few minutes, Declan Rice twice came close before Michail Antonio turned on a sixpence to fire in a wonderful winner.

The 30-year-old Antonio deserves his own mention. Bigger, perhaps better, attacking players have come to the London Stadium to take West Ham to the next level. He has seen them all off. At his peak, when fit, he is capable of leading the line of a team heading for Europe. And the signs increasingly suggest the team behind him are good enough to get there too.
Ron Walker