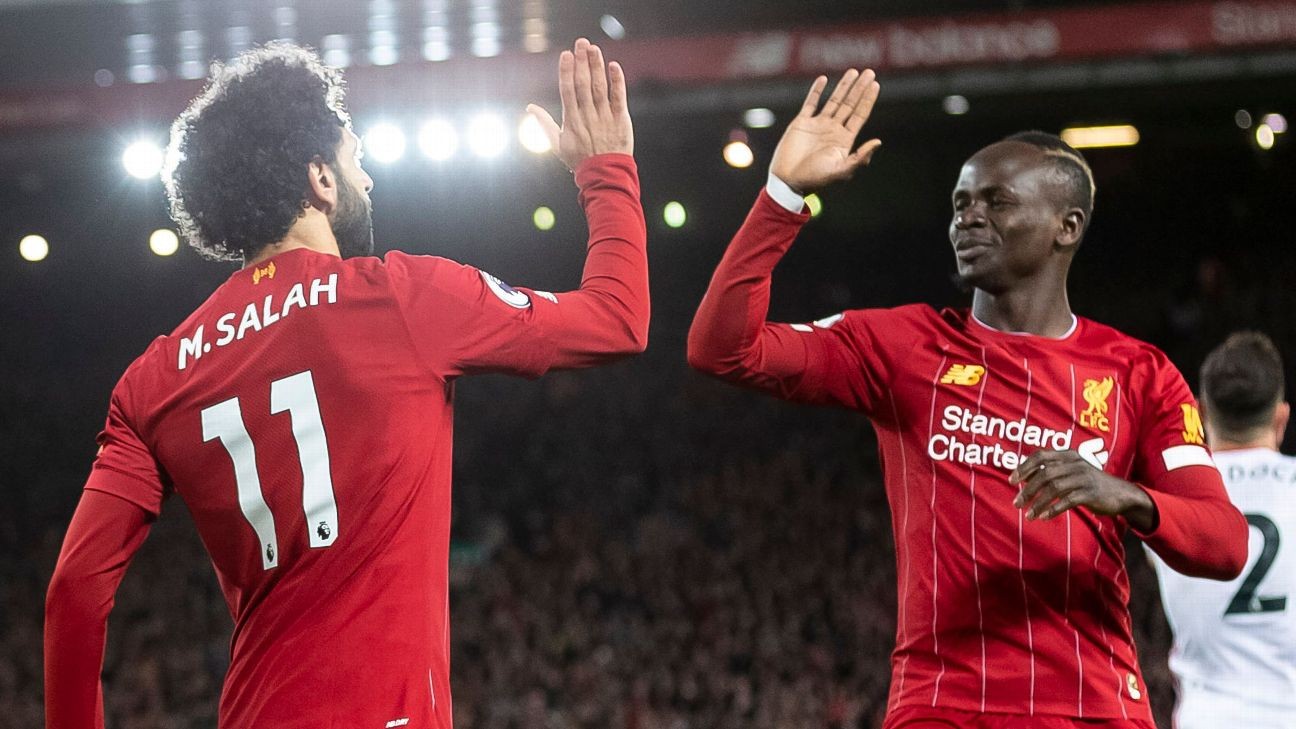 The Premier League is back!

Or, at least, it should be on June 17. The plan is still subject to government approval but barring any further setbacks, English football will return from its coronavirus-enforced break with Manchester City vs. Arsenal and Aston Villa vs. Sheffield United.

These Wednesday openers will be followed by a full round of weekend fixtures (June 19-21), with a provisional end date for the campaign set for July 25. There are 92 outstanding matches and while they will be played behind closed doors, all will be broadcast live.

There will have been exactly 100 days between the Premier League's last game -- Leicester City's 4-0 win over Aston Villa on Mar. 9 -- and the scheduled return of English football's top flight. Here are a few things to look forward to when the games finally resume.

Liverpool's title party is back on

Liverpool fans have endured a nervous wait as the debate around how to end the season has rumbled on, but they should now get to see their team crowned champions for the first time in 30 years. Jurgen Klopp's side are 25 points clear at the top and it is a question of when, not if, captain Jordan Henderson gets his hands on the trophy.

A 3-1 defeat to Watford at the end of February means Liverpool cannot match Arsenal's Invincibles, but they are still chasing a host of records. They are five wins away from matching the 32 victories recorded by Manchester City in 2017-18 and 2018-19 and need another 19 points from a possible 27 to pass Man City's record of 100 in a single season. That same City side won the title by a record 19 points in 2017-18, though Liverpool are on course to set a new benchmark.

The Reds need just a maximum of two wins to claim the title but can do it in their first game back if City lose to Arsenal at the Etihad Stadium on June 17.

Liverpool have waited 30 years for a Premier League title but that wait will soon be over.What else is at stake at the top of the table?

The race for the Champions League is complicated by Manchester City's appeal over the two-year European ban handed down by UEFA. The case is set to heard by CAS in early June and if City's suspension is upheld, fifth place in the Premier League will be enough to secure Champions League football next season.

Leicester City, Chelsea, Manchester United, Wolves, Sheffield United, Tottenham and Arsenal are in the pack behind Liverpool and City battling for the remaining European places. Leicester and Chelsea occupy third and fourth place respectively at present with nine games to play while United, in fifth, are a team in form after a run of 11 games unbeaten in all competitions before the break. Tottenham and Arsenal -- eighth and ninth in the table -- have a lot of ground to make up but Jose Mourinho's Spurs should be boosted by the return of Harry Kane and Son Heung-min from injury.

What about at the bottom?

Everyone below Southampton in 14th look to be in danger leaving Norwich, Aston Villa, Bournemouth, Watford, West Ham and Brighton battling to avoid the three relegation places. The season will restart with Norwich, Villa and Bournemouth in the bottom three and in the most danger of dropping down to the Championship. Norwich, bottom of the table and six points from safety, need a great escape in their final nine games to stay up, but only four points separate Villa in 19th and Brighton in 15th. The fight to stay up could go down to the wire.

Which are the must-see matches?

Manchester City vs. Liverpool: It will not end up being a title decider but the fixture will still feature the two best teams in the Premier League. Klopp against Pep Guardiola is usually a thrilling tactical battle and even without silverware on the line, it will still be worth a watch. City have surrendered their crown but they will be keen to show they can beat the best in Europe ahead of the proposed culmination of the Champions League in August.

Tottenham vs. Arsenal: The North London derby is scheduled to take place at The Tottenham Hotspur Stadium, but may yet be moved to a neutral venue depending on police advice. Mourinho and Mikel Arteta are harbouring faint hopes of a late dash into the top four, meaning there will be more up for grabs than just bragging rights when these two rivals meet.

Paul Pogba is fit again and his partnership with Bruno Fernandes these next nine games could go a long way in determining the Frenchman's long-term future.

Leicester vs. Manchester United: A fixture originally penciled in for the penultimate weekend of the season, there could still be plenty riding on the game. United have found form since the January arrival of Bruno Fernandes, while Brendan Rodgers' Leicester are chasing a return to the Champions League after making the quarterfinals following their unexpected title triumph in 2016.

Paul Pogba: Ole Gunnar Solskjaer hasn't had the luxury of picking Paul Pogba since Boxing Day, but the unexpected break has allowed the Frenchman to return to full fitness in time to help United's push for a place in the top four. Pogba's long-term future is still up in the air but for nine games at least, Solskjaer will hope to be able to pair the World Cup winner and new star Fernandes in midfield.

Jack Grealish: Aston Villa's survival hopes rest, in part, on the form of captain Jack Grealish. The 24-year-old has impressed with seven goals for a team struggling at the wrong end of the table and manager Dean Smith will be hoping for a few more before the end of the season. Keeping his boyhood club in the English top flight would be a fitting end to his Villa career with a host of top clubs, led by Manchester United, circling ahead of the next transfer window.

David Silva: The Spaniard has cemented his place as one of the Premier League's best ever players after 10 years at Manchester City and we have nine games left to enjoy him. The midfielder, who has won four Premier League titles, will bow out at the end of the season, having told Guardiola he's ready to move on at the age of 34.