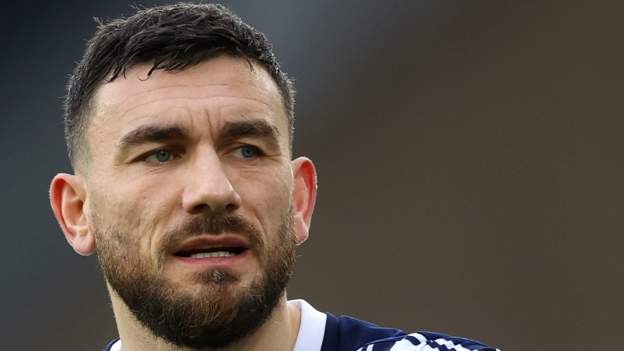 Robert Snodgrass' omission from the West Brom squad beaten at West Ham on Tuesday is being investigated by the Premier League.

The former Scotland midfielder, 33, joined Albion from the Hammers on 8 January for an undisclosed fee, making his debut in Saturday's win at Wolves.

But he missed the West Ham game because of "an agreement between the clubs", West Brom boss Sam Allardyce said.

The Premier League will examine whether competition rules have been broken.

Under normal circumstances, Snodgrass would have been eligible to play against West Ham, as his transfer was permanent.

It is only with loan deals that such restrictions apply in the Premier League - in those circumstances, a player cannot face their parent club.

But Allardyce said: "We could only get the deal done with that agreement.

"There was an agreement between the clubs that [in] this game he would not be allowed to play."

Premier League rule I7, listed in the competition's 2020-21 handbook, states that: "No club shall enter into a contract which enables any other party to that contract to acquire the ability materially to influence its policies or the performance of its teams in league matches."

It is not the first time there has been controversy regarding a player not facing a former club after a transfer.

In April 2007, goalkeeper Tim Howard was left out of the Everton side to play Manchester United at Goodison Park.

Howard had moved to Everton from Old Trafford on loan in July 2006, but the deal was made permanent in February 2007 - meaning he could have faced United two months later.

Everton left him out because of a 'gentleman's agreement' made when the USA international joined permanently.

The Premier League said in 2007 that it would not have sanctioned the permanent transfer if United had requested a clause preventing Howard from playing against them.

Following an investigation, though, the league said it was satisfied that neither club had done anything wrong.