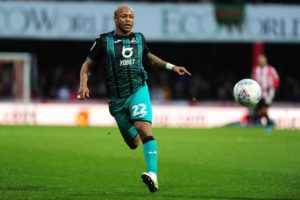 Swansea Star Andre could yet still leave the club this summer as a reunion with former boss Slaven Bilic at Westbrom is on the cards for the Ghanaian.

Ayew has started all Swansea’s first two games of the Championship season but is believed to be carefully thinking about his future following Swansea’s inability to secure Premier League football.

Slaven Bilic signed Ayew in 2016 to West Ham and both have held a good relationship since and Bilic is hoping to use that and the prospects of being a leader in his team to lure the former Marseille man from Wales.

The Ghanaian was Swansea top scorer in the championship last season with 18 goals in all competition and the Wales club will be desperate to hold on to their prized asset but will not stand on his way if he does decides to jump to the Premier League.

Another issue Swansea will be considering is Ayew’s wages which the championship side is struggling to meet and would be open to the idea of loaning him to a Premier league side to reduce their wage bill.

Ayew ,30, knows the clock is ticking for a return to the top tier and would be challenged to prove that he has what it takes to still be playing at the highest level.