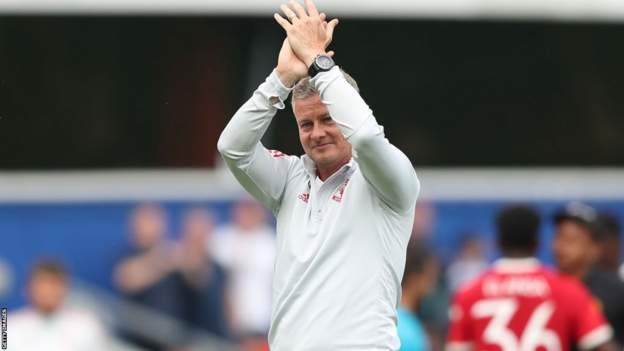 With City still hoping to get England captain Harry Kane to join them from Tottenham and Liverpool signing central defender Ibrahima Konate from RB Leipzig for £36m to play with fit-again Virgil van Dijk, Solskjaer feels the battle for major honours will be intense.

"This season coming up is one of the strongest Premier League seasons," he said.

"Of course it's been City and Liverpool fighting it out for a few years but I feel us and Chelsea have spent well and worked well and we should look at ourselves as potential challengers - but it's potential.

"You notice that there's big money being spent somewhere else and you have to keep up with the challenges.

"Anyone who ends up above last year's champions will be champions."

Sancho and Varane are still to train with their new club.

Sancho will link up with the squad back at Carrington when United return from their training camp in St Andrews before Saturday's friendly with Everton at Old Trafford.

Varane is still to have his medical.

Solskjaer is relaxed about the situation but accepts neither may start the opening Premier League game at home to Leeds on 14 August.

"I need to see how they are," he said. "I can't see them being available for Everton but hopefully they will be ready to be on the bench [against Leeds]."

Although United are still being linked with new players, including Atletico Madrid's Kieran Trippier and West Ham midfielder Declan Rice, it is understood Solskjaer would need to trim his squad before he could bring anyone else in.

"Anything from now is a bonus," he said.

However, sales cannot be ruled out. AC Milan are keen for Diogo Dalot to return to the club after spending last year on loan but United are only interested if it involves a firm commitment to sign the Portugal defender permanently.

West Ham would like Jesse Lingard back at London Stadium but it appears the England international would prefer to remain with United for the final year of his contract.

Midfielder Andreas Pereira spent last season at Lazio and did his chances of another loan move no harm with a wonder goal in the 2-2 friendly draw against Brentford at Old Trafford on 28 July.

The key issues centre around Paul Pogba and the goalkeeping department.

Like Lingard, Pogba is about to enter the final year of his contract and the indications are he is more likely to allow it to run down than leave before the 31 August transfer deadline.

But that does mean there is the potential for the France international to sign an extension.

"I hope every player thinks this is the place to be to win trophies," said Solskjaer. "Paul is always such a positive boy. He has come back and he's fresh and the talks I've had with him have all been positive."

Meanwhile, Tom Heaton's arrival from Aston Villa has added another dimension to the battle between David de Gea and Dean Henderson for the number one goalkeeping slot.

At times last season both seemed to have come out on top. And while it would seem obvious one needs to leave to preserve their international ambitions, there is no obvious move available.

"It's healthy competition," said Solskjaer. "If you're too comfortable, I don't think you get the best out of yourself. If it's toxic and it's energy-sapping that's not great.

Despite failing to win a trophy in his first two full seasons as United manager, Solskjaer has been rewarded for the improvement of successive top-four finishes for the first time since Sir Alex Ferguson's retirement with a new three-year contract.

However, as United themselves have said their overall net spend over the last three summers is higher than any other major club in Europe, there is pressure on the 48-year-old to deliver.

"Maybe the signal of continuity is important for the players as they know this is the way we want to do it," he said.

"But for me, you have to do well enough to stay anyway. It doesn't matter if you have a 10-year contract or a one year contract, if you don't do well, off you go."