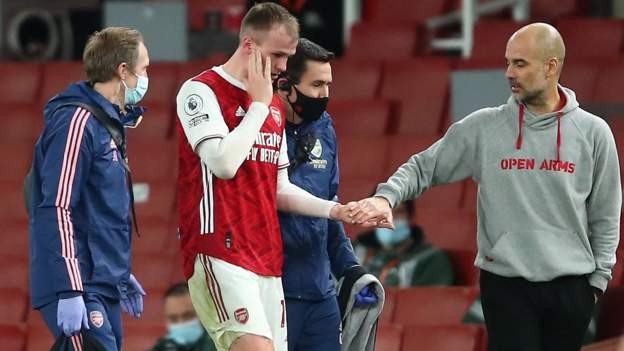 The Premier League is set to trial a saliva test that can be used to diagnose concussion.

The league is funding an academic study to see whether biomarkers in saliva can detect concussions in footballers.

It is part of a joint action plan on brain health by the Premier League, Football Association, EFL and Professional Footballers' Association

The plan sets out work being done to protect footballers from the impact of concussions.

A similar trial was carried out on male elite rugby union players in February, with the tests performed in a laboratory.

The results were described as "game-changing" and seen as a step closer to using pitchside saliva tests to diagnose concussion.

"It is important that football has come together to work collaboratively on this issue," Premier League chief executive Richard Masters said.

"With the help of experts, and alongside other sports with similar challenges, we want to ensure we have the right approach in place to protect the welfare of players."

The FA will also partner with the Rugby Football Union and Premiership Rugby to give former footballers access to specialist services designed to manage brain health after retirement.

Current and former footballers and their families are being consulted on the action plan, with an updated version to be published before the start of next season.

The Premier League trialled concussion substitutes in February after concern over links between head injuries in football and dementia.

England 1966 World Cup winners Nobby Stiles and Jack Charlton, who both died last year, had dementia, while Sir Bobby Charlton's family recently revealed he had been diagnosed with the disease.

Former Tottenham Hotspur defender Jan Vertonghen explained in December how he had felt the effects of a concussion he sustained playing for Spurs for the following nine months.